Roll them, turn them, bolt them: ITER assembly in high definition

The arrival of the first components on the ITER site will be the starter pistol for one of the most complex stage shows ever performed: the assembly of the ITER machine. In a first video back in 2011—The world's largest puzzle—we explained the challenging task of assembling the cryostat. In a new video titled Roll them, turn them, bolt them, the job is taken one step further as we look at the installation of ITER's in-vessel components such as the in-vessel coils, the blanket system and the divertor. None of these are easy tasks and a set of custom-made tools, platforms and cranes will be needed to transfer the bulky components from the Assembly Building, through port cells and into their final positions. The production of this eight-minute animation was certainly not as challenging as the assembly of the world's largest fusion device, yet it was no small matter. Some 31,688 individual objects had to be managed per scene requiring the experienced hands of four graphic artists and animation specialists from the German-based company Motion-e-Motion. Their job was to sort out vast CATIA data sets describing the ITER machine, to reduce them, and then to 'map, shade and rig' (in video terms). Eight computers with powerful Intel i7 processors took on the job, sweating for 168 long hours to render the data into a high-definition movie.

US ships 14,000 kilos of magnet hardware to Europe 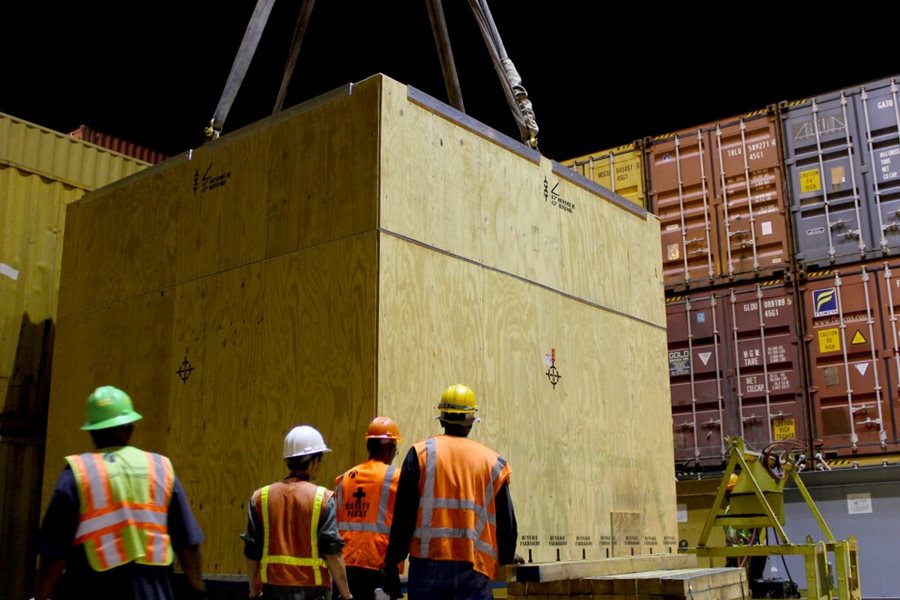 One of the unique and unusual aspects of participating in the ITER Project is the long and often intricate journey that hardware components must make from their manufacturing and testing sites to Saint Paul-lez-Durance, France where ITER is under construction. The logistics and coordination can be daunting, but the ITER Members are well prepared to face the challenge. The US Domestic Agency US ITER worked closely with vendor High Performance Magnetics in Tallahassee, Florida, to complete fabrication and transfer 800 metres of sample toroidal field magnet conductor to the port in Charleston, South Carolina, from where it will be shipped to the European winding facility in La Spezia, Italy. Delivery is expected to occur in late June. The shipping procedures are exacting to ensure the safe delivery of the sample conductor, which weighs about 14,000 kilos—shipping crate included. "The coil of sample conductor is about four metres in diameter. It is stacked up like a Slinky and can actually move like a Slinky if we don't secure it," said Kevin Chan, a project engineer for the US ITER magnet systems. The sample conductor, composed of non-superconducting copper strands, was produced in order to qualify the conductor fabrication processes; the production conductor installed in the ITER Tokamak will be composed of a mixture of copper and niobium-tin superconducting strands. The lift fixture, which is integral to the crate around the conductor, helps the conductor maintain its shape within the ITER requirement of +/-6 millimetres. The US ITER team actually achieved an even tighter tolerance of +/-1.5 millimetres with the fixture design. The fixture also had to meet European standards for rigging and is CE marked to indicate that requirements were met. "Securing the conductor with the fixture is necessary for the safety of the conductor and of the people handling it, plus for stability and integrity of the conductor," Chan said. The shipping crate can be delivered by container ship; however, securing the cube-shaped crate to the vessel required some additional attention to address its specific design features. Not all ports have the specialized equipment and rigging needed to handle oversized cargo. "There are a lot of unique aspects to ITER shipments, including international collaboration, dealing with a variety of shipping origins and destinations, different vessel types and selecting the best method for transportation with attention to costs, timing and risk," said Jeff Parrott, logistics and transportation coordinator at US ITER. Read the full article on the US ITER website. 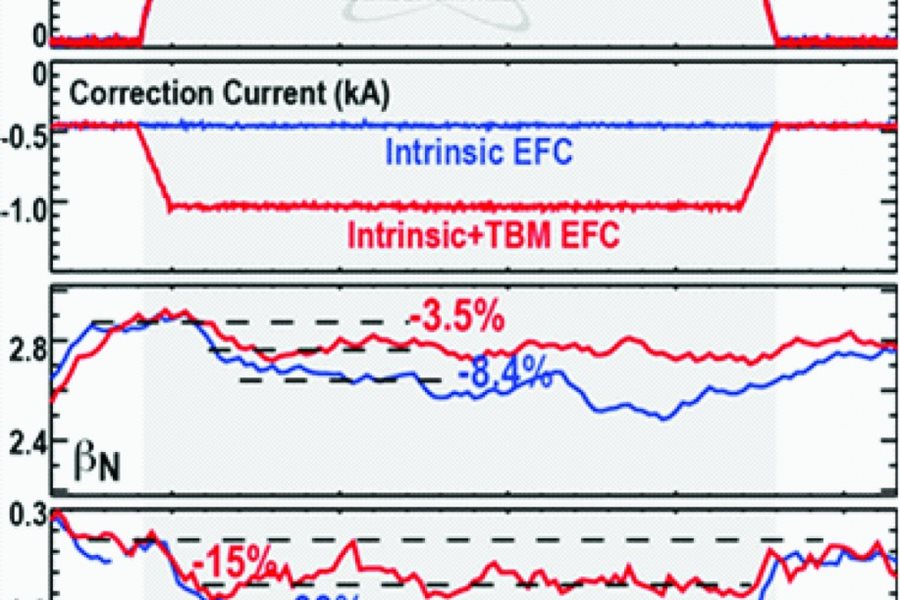 Recent experiments performed by a team of international scientists on the DIII-D tokamak in San Diego, California, USA, indicate that the magnetic field errors introduced by the Test Blanket Modules (TBMs) in ITER can be corrected using non-axisymmetric control coils so that the impact on high performance plasma operation is reduced to a tolerable level. Present TBM designs for ITER position nearly a ton of ferromagnetic steel close to the plasma surface to test the feasibility and efficiency of producing tritium fuel in the physical structures surrounding the plasma itself. Tritium will be produced within ITER's TBMs by exploiting the neutrons generated by the nuclear reactions occurring in the plasma, which will interact with lithium inside the TBMs. Previous DIII-D experiments in 2009 and 2011 with a set of electromagnetic coils that were specifically designed to mimic the magnetic error field from a pair of TBMs in ITER suggested that high performance operation in ITER might be significantly degraded by the additional magnetic fields produced by the TBMs. Those experiments indicated that as plasma performance increased, the magnetic fields produced by the TBMs significantly reduced energy and particle confinement, making it increasingly difficult to sustain high plasma performance. The latest experiments used sets of both internal and external control coils to correct the magnetic field errors introduced by the TBM mockup in DIII-D. Sophisticated methods of scanning the magnetic fields produced by the correction coils allowed the optimum correction to be made to specific components of the error field. With the optimum correction fields, it was possible to run the DIII-D plasmas at high performance with almost no degradation in performance due to the TBM mockup. In the graph above, the normalized energy confinement of the plasma (denoted by βN) hardly decreases with optimized error field corrections, though a more sensitive measure of the effects of error fields—the total angular momentum of the plasma—drops by about 15 percent when a single row of external coils is used. Similar results were found using internal correction coils. The results of these experiments indicate that it should be possible for ITER to compensate for a significant fraction (>60 percent) of the TBM-induced performance degradation in high performance ITER scenarios using either internal or external correction coils. Although a rigorous extrapolation of the DIII-D results to ITER remains to be confirmed, this is very important and timely information for ITER so that the conceptual designs of the TBMs can be finalized before the design reviews of the six test blanket systems begin in July 2014.

ITER catalyzes the development of superconducting technology in Russia

​The ITER Project was represented at a recent roundtable in Russia that reunited the State Duma (the lower chamber of the Russian Parliament), the Public Chamber, the state corporation Rosatom, the Kurchatov Institute, the Russian Academy of Sciences, the Federal Energy Service Company FSUE, and leading specialists from the fields of superconductivity and energy. Organized on 6 June 2014 to address the current status and development prospects of applied heavy-current superconductivity in Russia, the forum aimed to create a common understanding of the potential and the challenges of the field. The ITER Project was represented by the director of ITER Russia, Anatoly Krasilnikov, who stressed that participation in the project has catalyzed the development of superconducting technology in Russia. A superconducting strand production line was created from scratch at the Chepetsky Mechanical Plant (Glazov, Udmurt Republic) and - thanks to the cooperation between some of the country's leading industries - Russian superconductor for ITER matches the highest world standards. The following Russian institutes and industries are collaborating to fulfil Russia's procurement to ITER: the Chepetsky Mechanical Plant (strand manufacturing); the Bochvar Institute (strand verification); JSC VNIIKP (cabling); Institute for High Energy Physics (jacketing); and the Kurchatov Institute (global leak test and the mechanical testing of jacketing material). All deliveries of Russian conductor lengths for ITER's toroidal field and poloidal field magnet systems should be completed in 2015. - Alex Petrov, ITER Russia

​A 25-minute documentary in English on the ITER Project produced by Technology Update (Russia Today) won the bronze world medal at an international film festival in New York City this spring. Produced back in October 2013, "Way to New Energy" traces the origins of ITER, fusion and the tokamak, taking the viewer to Moscow, Marseille, and Saint Paul-lez-Durance, France as the story unfolds. You can watch or download the documentary from the website of New York Festivals - 2014 World's Best TV & Films.

​Vitali Dmitrievich Shafranov passed away on 9 June 2014 in Moscow. V.D. Shafranov was an outstanding physicist, world-recognized leader in the theory of confinement, equilibrium and stability of toroidal magnetic systems, and one of the principal founders of modern plasma physics and magnetic fusion research. During the Second World War he worked with his father on road construction and received his first government award in 1943 at the age of 14. He graduated school with a gold medal in 1946. After graduation from Moscow state university in 1951 he started his scientific career at LIPAN (part of the future Kurchatov Institute) in the department of Academician Mikhail Leontovich. He published his first paper on the stability of soft wire in parallel magnetic field together with M. Leontovich in 1952. Three of his most important pioneering results are: 1) An equation describing plasma equilibrium in axisymmetric magnetic field (Shafranov-Grad, 1956) 2) An equation for the Shafranov shift of magnetic surfaces with respect to tokamak magnetic axis 3) Shafranov-Kruscal criterium of plasma stability with respect to helical kink modes (1953) Beginning 1981 he was the member-correspondent of the USSR Academy of Science and in 1997 he became an Academician of the Russian Academy of Science. Academician V. D. Shafranov is the author of more than 200 scientific publications. For over 20 years he was the head of the Plasma Theory Department at the Kurchatov Institute. He was also chief editor of Plasma Physics Reports and editor of the Review of Plasma Physics for over 25 years. His colleagues remember his modesty to colleagues and the great attention he paid to their every concern. Vitali Dmitrievich Shafranov 01.12.1929 — 09.06.2014

​Fusion energy could change the planet. But what is it and why don't we have it? Physicists Andrew Zwicker, Arturo Dominguez and Stefan Gerhardt explain how fusion energy could be a gamechanger for the world's energy problems. You can either play the video to learn about fusion, or play with the simulations to make fusion! Click here to watch this eight-minute video produced in partnership with the Princeton Plasma Physics Laboratory.