Sub-assembly tools | A 12-tonne beam, a crane and a little push 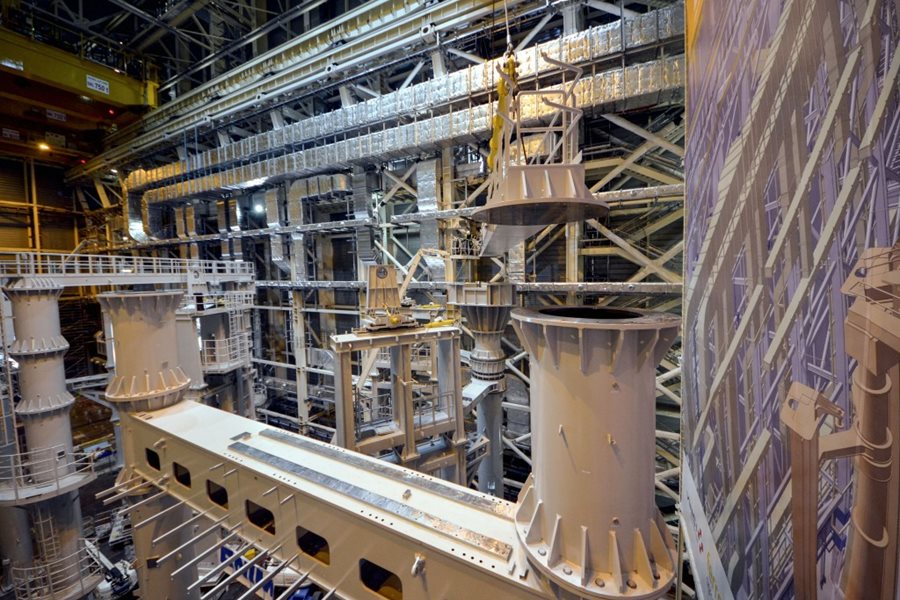 There is nothing remarkable about lifting a 12-tonne beam. Except when it happens in the spectacular setting of the ITER Assembly Hall, and the beam needs to be fitted with extreme precision into a structure as monumental as the ITER sector sub-assembly tools. Towering 22 metres above ground, the vacuum vessel sector sub-assembly tools (SSATs) are formidable handling machines that will be used to pre-assemble vacuum vessel sectors with a pair of toroidal field coils and thermal shield segments before integration in the machine. The assembly of SSAT-1 began in November 2017 and is now complete. Work on its identical twin SSAT-2 started in September the following year and is now entering its final phase. Part of Korea's contribution to ITER, the tools are assembled by French contractor CNIM. Lessons learned from SSAT-1 have reduced assembly time for SSAT-2 by approximately one-third. On Wednesday 9 January, installation operations began for some of the last elements: two 12-tonne beams that stabilize the massive pillars of the machine. Click here to watch a video of the installation. 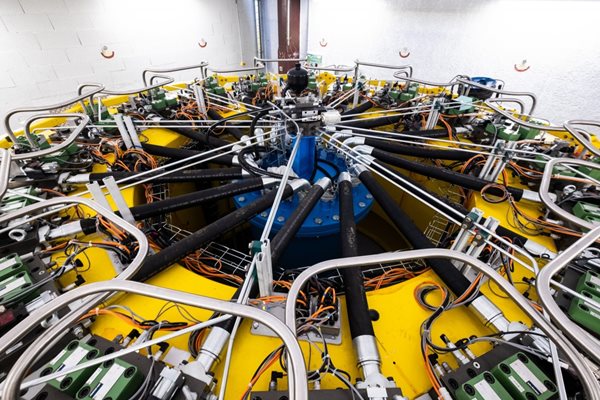 The tool is ready; the first prototypes are on their way. Soon, a specialized test bench at CNIM (France) will enter into service to verify the resistance of the large composite rings that are designed to 'push back' against the forces exerted on the toroidal field coils during operation. At the top and bottom of the machine, where the tapered ends of the toroidal field coil structures meet, large composite rings will be installed to help the coils resist electromagnetic forces during operation. The material chosen for the pre-compression rings—more than one billion minuscule glass fibres glued together with epoxy resin—has been confirmed through R&D and testing as the most resilient and suitable for withstanding high loads and avoiding the circulation of current. Without the pre-compression rings forces calculated at several hundred meganewtons (MN) would stress the toroidal field coils and, over time, cause material fatigue. Full-size prototype rings are about to be tested at the ITER pre-compression ring facility, where a tool developed by Douce Hydro (France) in collaboration with CNIM will exert a force of 36,000 tonnes while maintaining a positional accuracy of 0.1 mm. Stress tests will last a few hours and will be supplemented by other tests to confirm that the creep and fatigue performances are also adequate. The test facility and tooling have been procured by the ITER Organization through a contract with CNIM/Douce Hydro; the European Domestic Agency developed the conceptual design of the facility and is procuring the nine ITER pre-compression rings (two sets of three plus one spare set). Read the original report on the European Domestic Agency website. 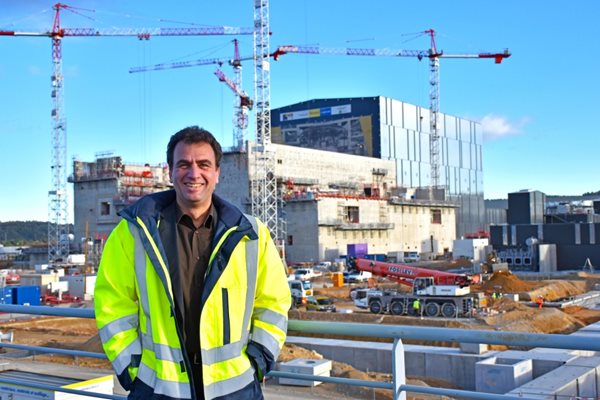 ITER's new internal auditor Friedrich Lincke goes where his expertise is needed to make a difference. Armed with valuable experience from many years of service in large national and international settings, he wants to be a partner in improving work processes at ITER. Although the role of an internal auditor is often associated with compliance and respect for rules, it is first and foremost about assessing the performance of business operations and management systems. 'The auditor's job is not about checking on people—it's about improving the efficiency and effectiveness of work processes," Lincke explains and adds: "It's very much a forward-looking activity.' He strives to understand the root causes of problems and their implications in order to identify a way to resolve them. Risk assessment is a key driver of Lincke's activities, which cover core corporate functions such as finance, procurement, contract management, human resources and IT. This provides the basis to identify priority areas for review and contributes to the design of mitigation measures to bring risk down to an acceptable level. 'Risk needs to be managed purposefully,' Lincke says. 'There is no zero risk—if you want zero risk you might as well stay at home.' Lincke sees his role as helping ITER to realize its mission. Being on the inside of the ITER Organization—yet independent in his role as internal auditor—he will focus on identifying areas where his expertise is really needed. 'An audit is a genuine opportunity for a manager, as it helps to identify problems and provide solutions using communication channels outside usual reporting lines,' he explains. According to Lincke, the auditor should be a partner to managers and staff alike, as successful changes and adaptions require the buy-in of everyone involved. During his first four months at ITER Lincke has already acted on his strong belief in cooperation: 'We don't have recommendations anymore; we now have agreed actions.' This inclusive approach ensures that risk mitigation measures will be long lasting and enjoy the support of colleagues. Diving in at the deep end immediately after his studies in business administration at the Technical University in Berlin, Germany, Lincke took up his first job in 1995 at the governmental agency responsible for transitioning East Germany's centrally planned economy to a market economy, a transition affecting some 8,500 companies and four million employees. After a stint of several years in the private sector focusing on corporate restructuring and strategic consulting, he followed in the footsteps of his father and grandfather and entered the international arena by joining the United Nation's Food and Agriculture Organization (FAO). He worked as a regional auditor in Santiago de Chile and later as the Rome-based manager for the decentralized audit activities of the FAO. Having spent his childhood and youth in the US, India, the UK and Chile, Lincke is no stranger to an international setting and cultural diversity. He enjoys both consultancy-type audit work and the diplomatic approach of an international organization. His career has taken him to over 40 countries all over the globe, equipping him with insights and experiences he is ready to share through his important job at ITER. 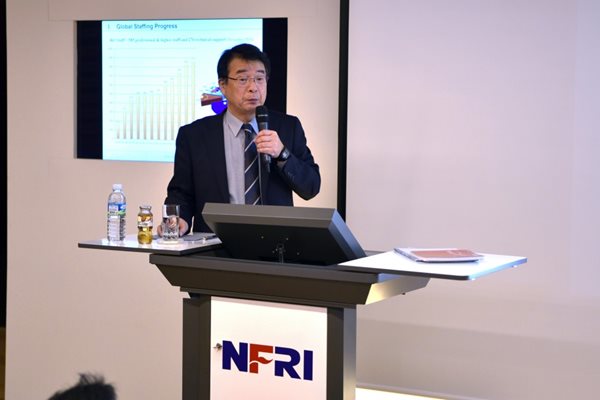 In 2018 the number of staff members employed by the ITER Organization increased to 858, as skilled and qualified candidates joined from each of the seven ITER Members. With major machine assembly activities beginning next year, the project continues its focused search for talented engineers, scientists, project managers and associates. ITER's multinational collaboration model is designed to tap the expertise and experience of every Member. For staff positions posted to the ITER Jobs page, the Human Resources Department works closely with ITER Domestic Agencies on recruitment outreach, using platforms such as LinkedIn to encourage the widest possible application pool and developing a number of strategies tailored to the specificities of local recruitment markets. In parallel, the promotion of two non-staff categories—the ITER Scientist Fellows and the ITER Project Associates—helps to fill the project's needs for specialized talent by encouraging experts from the Members' science, technological and industrial communities to contribute. Particular effort has been made in recent years to attract staff from under-represented ITER Members, who have only 25 to 50 staff on site (less than 9 percent of the total). Last year, for example, promotional videos were released to encourage applications from candidates in India and Japan (scroll down here to see them), and a third is under development for Russia. ITER Deputy Director-General Eisuke Tada also recently visited Korea to emphasize the advantages of well-balanced participation by all Members. 'The human resources of the project are key to the latest project completion statistics, which show that 60 percent of the total work scope to First Plasma has been achieved. We would like to see the participation of experienced engineers and scientists from all under-represented Members to increase, and encourage all qualified applicants to apply through their Domestic Agencies.' For more information about open positions at ITER, please consult the ITER Jobs page.

On October 9 2014, fusion research bodies from European Union member states and Switzerland signed an agreement to cement European collaboration on fusion research and EUROfusion—the European Consortium for Development of Fusion Energy—was born. EUROfusion supports and funds fusion research activities on behalf of the European Commission's Euratom program. Today, there are 30 participating research organizations and universities from 26 European member states plus Switzerland and the Ukraine. Beginning this month, Ambrogio Fasoli replaces Jérome Pamela as the Chair of EUROfusion's decision-making body, the General Assembly. Jérome Pamela had been in the role since January 2015. Challenges ahead for the new Chair include the transition to the next European research and innovation framework program, Horizon Europe; navigating the uncertainties linked to Brexit; and the strategic direction of EUROfusion as it pursues the objectives laid out in the European Roadmap to Fusion Electricity. Read interviews of the incoming and outgoing Chairs on the EUROfusion website. See an on-line biography of the new Chair on the EPFL website.

Every year in December, the annual meeting of the Fusion Power Associates brings together senior representatives of the US and international fusion communities and US policymakers to review the status of fusion research and consider the way forward. The 39th annual meeting, organized in Washington D.C. on 4-5 December 2018 on the topic of 'Strategies and Expectations Through the 2020s,' was no different—representatives from US government and US national labs and universities mixed with representatives from programs in Canada, China, Germany, Japan, Korea, the United Kingdom and, of course, ITER to review the fusion research landscape and promising paths to fusion energy. All presentations from the 39th Annual Meeting can be downloaded here.

Researchers at the Princeton Plasma Physics Laboratory in the US are reporting findings that can be beneficial to ITER, says John Greenwald on the laboratory's website. Results published by theoretical physicist Allan Reiman and his colleague Professor Nat Fisch in Physical Review Letters focus on so-called tearing modes—instabilities in the plasma that create magnetic islands, which are a key source of plasma disruptions. Currents driven by radio frequency waves in the interior of these magnetic islands can stabilize deleterious tearing modes, an effect that is augmented by small perturbations in the plasma's temperature. "When the power deposition in the island exceeds a threshold level, there is a jump in the temperature that greatly strengthens the stabilizing effect," says Reiman. "This allows the stabilization of larger islands than previously thought possible." Read the full report on the PPPL website. Physicists Allan Reiman, left, and Nat Fisch. (Photos by Elle Starkman)

Energy Leaders Need To Pay More Attention To Fusion In 2019