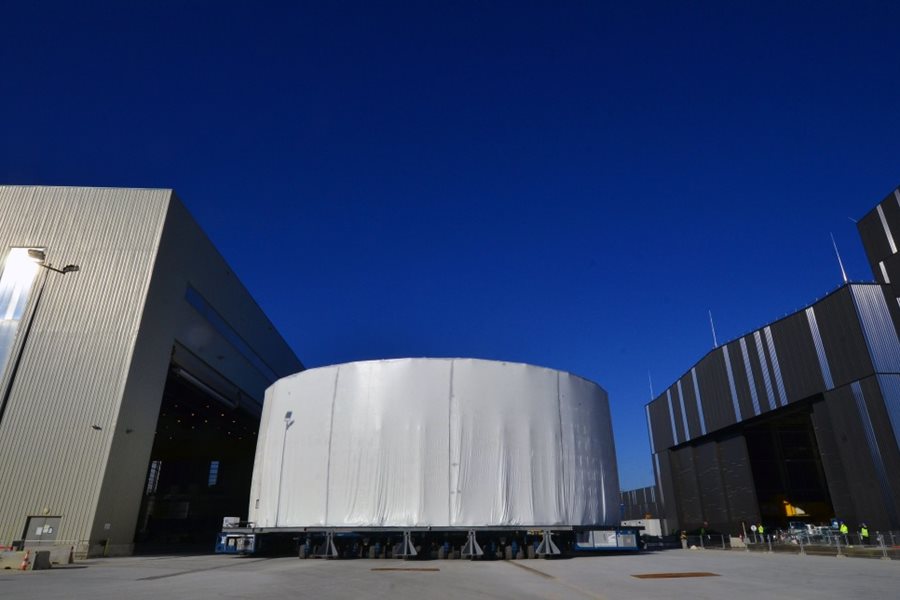 Art has little to do with the transfer of a giant component. On Monday however, as ITER was preparing to celebrate Leonardo da Vinci's 500th anniversary, science, technology and industry conspired to provide a strikingly spectacular and beautiful event. As the set of trailers carrying the lower cylinder of the ITER cryostat slowly crawled out of the Cryostat Workshop, everything combined to create an awesome view: the minimalist architecture of the workshop; the cylindrical component all draped in white, and the shimmering steel of the Assembly Hall ... all against the backdrop of the intense blue of a spring sky in Provence. The lower cylinder of the ITER cryostat is but one section of the giant thermos that will envelop the ITER Tokamak. Standing 12 metres high, it represents one-third of the total height of the ITER machine. As operators stood close to it, carrying out the highly delicate transfer operation, one could measure how tall, large and massive ITER will be. Transferring the near-500-tonne load from its assembly site to the storage area a few dozen metres away required no less than four self-propelled modular transporters arranged in a square and moving in perfect coordination. Particularly impressive was the sharp 90-degree turn that the trailers had to take in order to reach the storage area—192 independent wheels slowing rotating at different angles, like small appendages of a powerful living organism. To date, the lower cylinder is the heaviest load to be moved on the ITER platform. Solidly encased in its steel frame and carefully cocooned in air-tight material, it will remain in storage until the time comes to move it into the assembly pit. The operation on Monday was a key milestone involving a dozen stakeholders—the cryostat team; heavy load transport specialist Sarens; metrology experts from ITER; global logistics provider DAHER, and many others (see box). Transferring the lower cylinder to the storage area has freed a large working space inside the Cryostat Workshop. Soon, this space will be occupied by the assembly and welding operations for the upper cylinder whose segments are already on their way from their manufacturing location in India. 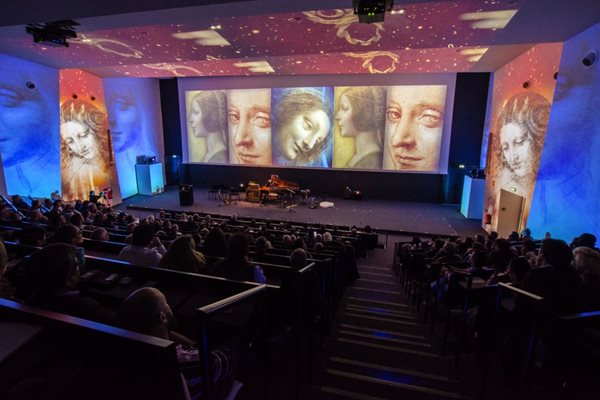 'The most noble pleasure is the joy of understanding.' Written more than 500 years ago in the private journal of Leonardo da Vinci, these words still felt timely and relevant to the 120 guests assembled on 15 April to celebrate Italian Research Day. Part cultural experience, part celebration of scientific investigation and industrial innovation—the event traced patterns of learning and innovation from the individual genius of Leonardo da Vinci to the collaborative inspiration of the ITER Project. Established in 2018 by the Italian Ministry of Ministry of Education, University and Research, Italian Research Day coincides with the birthday of Renaissance artist, inventor, and polymath Leonardo da Vinci. This year is particularly special, because it marks 500 years since da Vinci's death in Amboise, France, where he spent his final years. Celebrating Italian Research Day at ITER this year was a 'logical choice,' according to co-host Alessandro Giovine, the Consul General of Italy in Marseille, given ITER's status as a unique example of modern human innovation and the prominent role that Italian research institutions and companies are playing in the realization of the ITER machine. Giovine treated the guests to a letter from Sergio Mattarella, the President of Italy. 'From the pressurized modules of the International Space Station to explorations in the seas and underground laboratories, from the commitment to the International Thermonuclear Experimental Reactor to research, hospitalization and healthcare institutions, Italian innovators of our time contribute with passion, tenacity and a spirit of responsibility to the welfare of the country and its competitiveness,' the president wrote. Attendees to the full-day event—ranging from local mayors to the leaders of an extensive range of Italian research institutions and industrial companies—were treated to a worksite tour led by ITER Director-General Bernard Bigot, followed by an afternoon program of Renaissance music, technology presentations, and a multimedia show, 'The Da Vinci Experience,' by the Milan-based production company, Cross Media. The program closed with 'Da Vinci Imagines ITER,' an onstage tableau featuring artist Michela Meneguzzi of Verona, accompanied by the baroque ensemble, Concerto Soave. Having spent much of Sunday on the ITER worksite, Meneguzzi was able to capture and render the perspective and the colosseum-like ambiance of the Tokamak Pit in the style of Leonardo da Vinci. As with Leonardo's life, the program at ITER blended art and science. In his keynote address Marco Ricotti, professor at the Politecnico di Milano, noted that da Vinci's approach to 'naturalism' was rooted in three elements: direct sensory observation, the mathematical and geometric proportions of natural phenomena, and the correlation between scientific knowledge of nature and the associated technological practice. 'Each science must have its own 'beneficial consequence.' Leonardo does not mean to know only, but also to build.' To illustrate the Renaissance inventor's far-reaching influence, Ricotti offered da Vinci's conception of a machine that could harness the energy of rising hot air—a concept that has been adapted in the passive safety systems of the latest nuclear reactor designs. As Director-General Bigot summarized, "Leonardo's contributions to art, science, and technology are fundamentally unique—a legacy like no other.' See the gallery below for more pictures of the day.

Image of the week | When the Pit inspires an artist 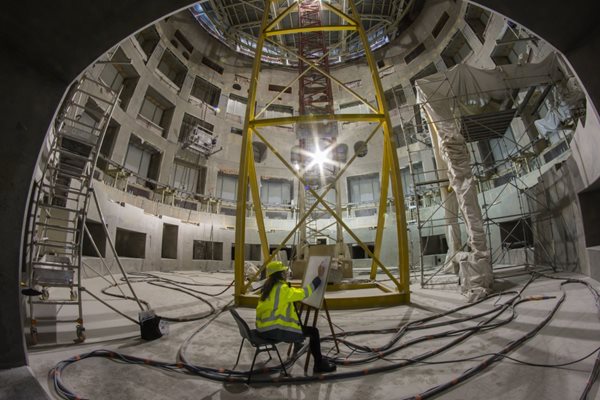 On a Sunday morning, when all is silent and still on the ITER platform, an eerie dimension is added to the Tokamak Pit. Hidden eyes seem to peer through the openings in the 30-metre-high circular wall; the blend of skylight filtering through the edges of the lid above and the harsh yellowish lighting from halogen projectors create an other-world atmosphere. When planning for the Leonardo da Vinci event, ITER Communication felt that the place, in its unique strangeness, could inspire an artist—especially one, like young Michela Meneguzzi, whose work includes renditions of nocturnal scenes in mysterious, unidentified places. Michela was thrilled at the proposal. Before installing her easel on the very floor where the ITER machine will be assembled, she read everything she could on fusion and tokamaks. 'I realized what this project means. I couldn't believe my luck.' The 28-year-old artist spent close to five hours in the Pit to capture the essence of the place, preparing a sketch that she would finalize the following day onstage. Upon folding her easel, she mused: 'What could be more exciting than this experience? Maybe painting on the Moon, or on Planet Mars ...'

Leonardo and innovation | In the steps of a giant 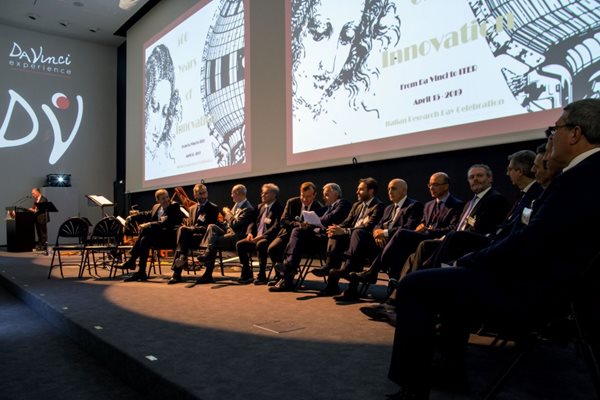 To the members of a panel on innovation and Italian leadership, the moderator had one question: how do you see Leonardo da Vinci's scientific method—a systematic approach to observation, analysis, knowledge and learning—translating to modern scientific discovery and industrial applications including ITER? 'I think Leonardo might have been very interested in whether humankind can achieve the dream of generating fusion power in a machine,' said Massimo Garribba, from the European Commission's Directorate-General for Energy, who opened the panel discussion. 'He was a dreamer himself: he designed flying machines and much more.' Painter, musician, writer, anatomist, draftsman, scientist, architect, engineer, designer ... Leonardo da Vinci's ability to draw on all of his skills to create—whether a novel device or a perfectly proportioned anatomical drawing—is a model for problems as complex as fusion. 'Here at ITER we want to take the power of the Sun and bring it down to Earth and the solution we propose relies on almost every field of science (plasma physics, materials science, engineering, electronic control systems...).' The panelists came from two distinct but related worlds: the theoreticians—leaders of Italian university programs and research institutions—on the one hand, and the practitioners—heads of industrial enterprises, large and small, in fields relevant to ITER—on the other. Building on the moderator's question, they drew two other parallels between Leonardo's genius and the research and development that is underway around the world today, both inside and outside of the ITER Project. Leonardo used the equilibrium he observed in the natural world (through proportion, numbers, and measurements) in all of his artistic and scientific creations. This same equilibrium, panelists agreed, should inform the quest for low-carbon, sustainable energy in order to arrive at a solution that maintains balance in our climate, our relationship with Nature, and among ourselves. And parallels can be drawn between the transition—or rebirth—society is going through as we collectively try to transform our habits into a more sustainable form of living, to the Renaissance period sparked by Leonardo da Vinci and others that transformed nearly all facets of European culture and society. Leonardo da Vinci was interested in learning not only for learning's sake, but for the way creativity and innovation and devices and machines could improve lives. However for the modern inventor who shares Leonardo's goal, the innovation environment has changed. 'We are no longer living the Renaissance model of the solitary scientist; we have interlinking systems of research around the world,' said Umberto Minopoli, president of the Italian Nuclear Association. 'In today's world we need global solutions for the big scientific questions we are facing.' As keynote speaker Marco Ricotti concluded, 'During Leonardo da Vinci's time, one genius was enough for thousands of machines. Here at ITER, we need thousands of scientists and engineers for one machine ...'