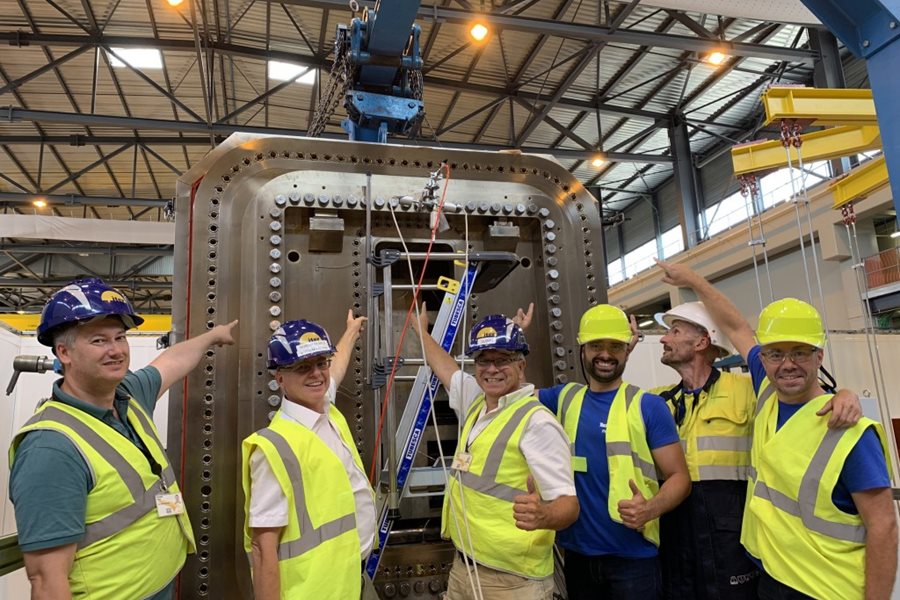 The ITER vacuum vessel, its ports and port extensions, and port plugs all provide the vacuum boundary and first safety confinement barrier of the ITER machine. In this context, the leak tightness of the large metallic vacuum seals around the ports is critical. In order to leave nothing to chance, the ITER Organization is testing vacuum sealing on a real-size test rig. Recent test results were excellent. The high-performance vacuum sealing of the ITER vacuum vessel's 50+ large ports is a 'first of a kind' challenge due to the rectangular shape of the ports, their large size, and the need to remove and replace port plugs (large, stainless-steel components that 'plug' the openings and also play a role as structural host to systems such as diagnostics). Eamonn Quinn is responsible officer for the Large Seal Test Rig (LSTR) program. 'To leave nothing to chance, a full-size replica of the largest equatorial ports was designed, manufactured and installed on site with the purpose of testing the vacuum sealing of what will be the largest ports ever built on a tokamak.' The equipment was installed in the European Poloidal Field Coils Winding Facility on site, where the 'clean' conditions were ideal for the tests, and space was made available courtesy of the European Domestic Agency. The test rig is of an impressive size (nearly 5 metres in height and as many in length) and it weighs around 19 tonnes. It gives a preview of how the ITER machine will look when seen through the equatorial ports cells, as they are starting now to take shape on the construction site. It was built and installed by Indian high-tech company Vacuum Techniques. There was much preparation, along with repeated inspections and some anxiety as the first large, double all-metallic seal was positioned on the flange. The flanges were brought together with the repeated tightening of 100 bolts, and after a number of hours of muscle flexing the seals were compressed. Then came the leak tests: first a quick one—no leak found. Then the thorough one, during which the leak rate across each seal was <10-11 Pa.m3.s-1 —a world-record-breaking sealing performance for the largest non-circular all metal vacuum seal! (In lay terms, that means that no more than the volume of air contained in a glass would leak over a period of ... 100 million years.) The performance on this first test was well beyond the requirements, beyond all expectation. In short, a world record breaker! The metal seals were made by Technetics (US). Company Vice President Bob Panza had time to comment: 'I heard the wonderful news yesterday. This is a result of good collaboration between our companies and we should all be proud of the results.' The seal test rig not only allows the largest demountable rectangular seals to be tested, but also enables us to prepare installation techniques which will be critical to achieving the required vacuum quality. Since the first test, the validation program has successfully continued with heating the flanges to 100 °C and then on to 240 °C and still the sealing performance has been maintained.

Towards DEMO | What will the blanket teach us? 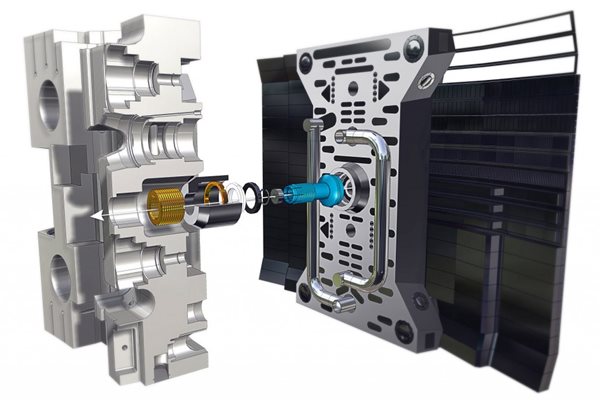 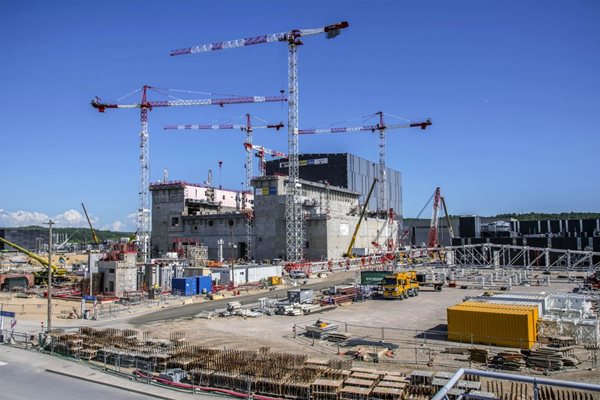 Notice anything? Yes, the giant poster (25 x 50 m) on the temporary wall of the Assembly Hall has been removed. Displaying a cutaway of the ITER Tokamak, it had been installed in June 2016 and, for more than three years, it stood as a reminder of ITER's ambition. Little by little, as the bioshield and Tokamak Complex took shape, most of the poster disappeared from view. Its removal in late August marks a first step in the dismantling process that will see the temporary wall that separates the Assembly Hall from the Tokamak Building removed. The poster's disappearance is just one sign that a new chapter is opening in ITER construction. Throughout the worksite, operations large and small are all heading in the same direction: preparing for the assembly phase that will officially commence in March 2020. Following Newsline's summer recess (there is no such thing as a 'summer recess' on the ITER worksite) the gallery below takes you on a tour of the major operations conducted or initiated in August—from the tallest heights of the Tokamak Building where the first pillars of the crane hall will soon be installed, to the lowest depths of the Tokamak pit where work as delicate as watchmaking is being performed on 5-tonne components.

Image of the week | On the thruway from Hefei to Shanghai 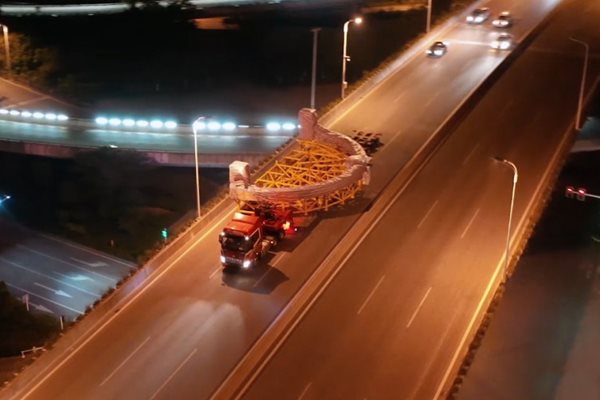 Over the next four years, China will be shipping approximately 100 large components for the magnet feeder system, adding up to 1,600 tonnes of equipment in all. Two "Highly Exceptional Loads" left Shanghai in early August. Feeder assembly is one of the major machine assembly activities, representing just over 11 percent of the total Tokamak machine baseline workload. Thirty-one magnet feeders, distributed either under the machine or over the machine, will transport electrical power and cryogens in to the superconducting central solenoid, toroidal and poloidal field coils, and correction coils. Measuring from 30 to 50 metres in length, the feeders are manufactured and shipped in three fully instrumented segments: the coil termination box (furthest from the machine), the cryostat feedthrough (the part of the feeder that passes through the bioshield and cryostat into the vacuum environment) and the in-cryostat feeder (which connects to the coils). The in-cryostat feeders sent in August by China have a unique semi-circular shape due to their assembly position under the vacuum vessel inside of the cryostat base. They will connect to the bottom correction coils, and need to be on site relatively early in the assembly sequence. The components will travel this month along the ITER Itinerary as "Highly Exceptional Loads.*" *About 10,000 ITER components fall into the category of "Conventional Loads," 3,000 are "Conventional Exceptional Loads" and 300 are "Highly Exceptional Loads." 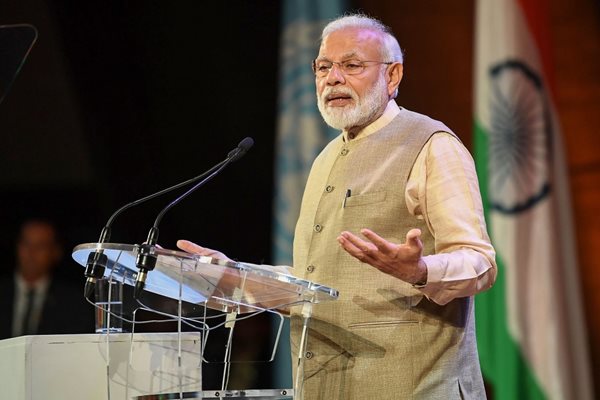 In August, while on official visit to France at the invitation of President Emmanuel Macron, Prime Minister Narendra Modi of India shared his vision of cooperation in the field of energy on several occasions. At the UNESCO headquarters in Paris, he took pride in his country's participation in "the only fusion project under construction in the world." In conversations with the French President, in addressing the G7 Summit, and in bilateral exchanges with other heads of state or of government, he highlighted India's large-scale efforts to develop clean energy, mitigate climate change and achieve most of the COP 21 environmental goals set for 2030 in the coming 18 months. On 23 August, Prime Minister Modi was at the UNESCO headquarters in Paris to address the Indian community in France. 'Many of you,' he said, 'are representing India's scientific talent in France, and are involved in the signature projects of both countries in atomic energy, aerospace technologies and other high-tech areas.' ITER is one of the 'signature projects' that Modi specifically highlighted: 'The only fusion project under construction in the world is in France and India is part of it. A highly capable Indian team is involved in this major scientific venture, one of the most important of this century. When fusion technology becomes available, providing immense quantities of energy for future generations, this achievement will bear the mark of your contribution. Think of the pride that will be felt by every Indian!' The expatriate Indian community has a strong relation 'with the soil of India.' With France, the relation is also strong but of a different nature. 'It is one of hard work and dedication,' said the Indian Prime Minister, 'and your efforts, your successes are a matter of pride for both France and India.' 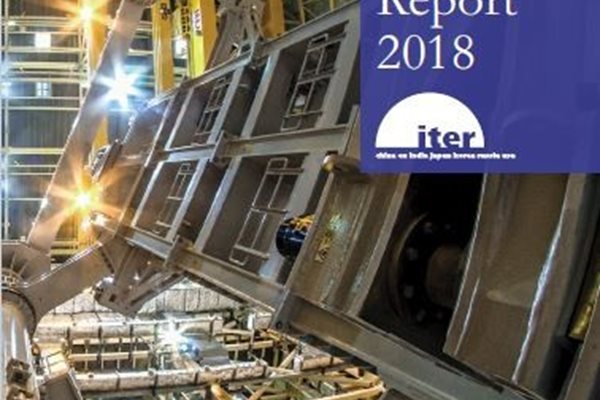 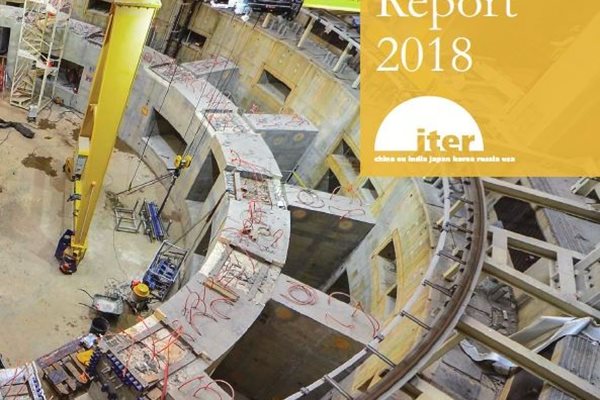 A history of fusion research and development Part 3

In Making Of A Miniature Sun On Earth, India's Contribution Is Enormous (video 14'33")

"Made In India" Written All Over "Little Sun" Being Created In France (includes video report, 3'02")