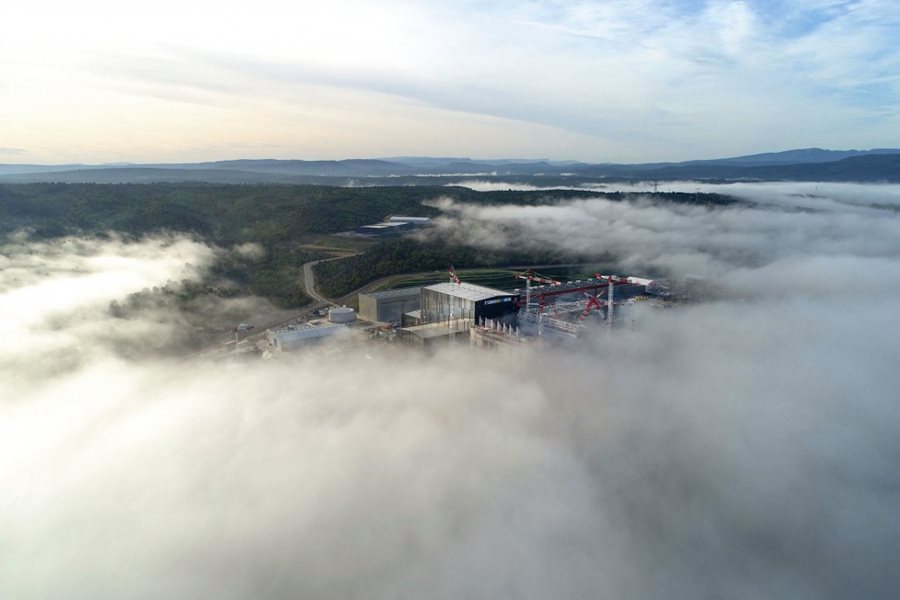 Due to its proximity to the Durance River and to the narrow gully spanned by the Bridge of Mirabeau, the area around ITER often experiences a peculiar meteorological phenomenon: whereas the rest of the countryside basks in bright sunlight, a thick fog settles on the approaches of the ITER worksite. On the morning of 25 October, our drone operator captured the precise moment when the installation buildings emerge from the clearing fog—a spectacular and unusual image that conveys an eerie feeling ... In this latest drone survey, many other things were captured: the monster crawler crane stationed at the side of the Tokamak Complex, ready to extend its 120-metre long boom to install the pillars of the future crane hall; the crisp details of the installation's buildings, outlined by the autumn light; and the ongoing works in and around the Tokamak Complex. Once again, the ITER site is revealed in all its industrial beauty—a unique place for a unique purpose. 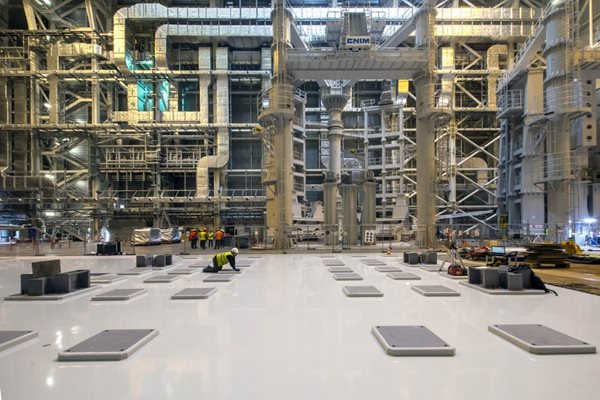 By the end of December, the massive painting job in the Assembly Hall will be complete and the building's floor will be as white and pristine as the landscape in a Christmas postcard. The ongoing operation, which consists of coating 6,500 square metres of floor with epoxy resin, is part of the strategy to keep the ITER components as clean as possible throughout the whole process of unpacking, pre-assembly and integration. After leaving storage, and while still on their dedicated transport platforms, the largest components will be submitted to a thorough cleaning process in the antechamber of the Assembly Hall, the Cleaning Facility. Once in the Assembly Hall proper, the assembly teams have to ensure that the components are not contaminated by dust or other impurities that could alter assembly precision or, when the machine enters operation, plasma performance. A first, simple and obvious step is to have a hard, perfectly smooth floor that will resist erosion. In mid-October workers began pouring and spreading a thick layer of epoxy resin on the first of the four patches delimited on the building's floor. The mirror-like coating is robust enough to withstand the weight of the self-propelled transporters that will deliver the largest components to the crane hooks. The first of the four patches was finalized last week, in time for the upcoming delivery of the first elements of the 'upending tool,' which will be used during the pre-assembly operations of vacuum vessel sectors. By Christmas, 24 tonnes of epoxy resin will have been poured and spread, covering the entire 6,500 square-metre surface of the Assembly Hall. 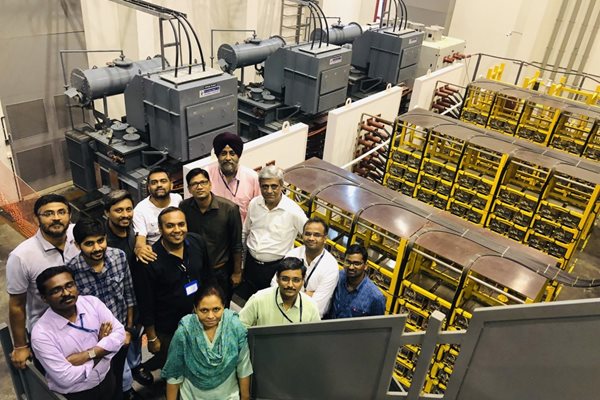 Every 23 seconds during fusion operation, a probe beam will penetrate deep into the core of the ITER plasma to aid in the detection of helium ash—one of fusion's products and a reliable indicator of reaction efficiency. The beam is generated by the diagnostic neutral beam system, an in-kind contribution from ITER India. In Ahmedabad, India, a 600 m² facility stands ready. The beamline vacuum vessel has been delivered, the transmission line installed, and one of three specialized power sources—the acceleration grid power supply—is currently undergoing site acceptance tests. When manufacturers deliver the final components for integration next year, including the crucial beam source, the team at ITER India will have constructed a full-scale testbed for the characterization of the diagnostic neutral beam before delivery to ITER. Three years of fine-tuning and performance optimization and demonstration are planned. The role of the diagnostic neutral beam in the detection of helium ash is essential. From two places in the ITER vacuum vessel, at perpendicular viewing points to the probe beam, CXRS diagnostic instruments (for Charge eXchange Recombination Spectroscopy) will detect the light produced by the exchanges between helium atoms in an excited state and the beam—the only direct method for diagnosing the concentration of helium ash in the core plasma. 'Helium ash is the name given to the helium nuclei produced by fusion reactions in a deuterium-tritium plasma,' explains neutral beam scientist Beatrix Schunke. 'Once they have shared their energy with the rest of the plasma they have no further use, and their removal and replacement by deuterium-tritium fuel is required to prevent dilution of the plasma. Measurements from the CXRS diagnostics, which are made possible by the diagnostic neutral beam, are crucial for demonstrating that fusion reactions have taken place.' The probe beam will be produced at 100 kV—the exact energy needed to interact with the atoms in the plasma and 'illuminate' helium impurities. Although ITER's diagnostic neutral beam system was designed to share many mechanical engineering features with the heating neutral beam system, the beam is not an exact replica. The diagnostic neutral beam will operate at lower energy but at a higher level of current (60 A as opposed to 40 A), and the specifications for the beam optics—no more than 7 mrad of divergence along a trajectory of 20.7 (~ 21) metres—are much more stringent. 'The successful delivery of the diagnostic neutral beam to ITER is dependent on two critical performance criteria—the production of a uniform, low-divergence beam from the source, and well-controlled transmission over long path lengths,' explains Anupam Sharma, a high-voltage electrical engineer in ITER's Neutral Beam Section. 'The India Test Facility in Ahmedabad will allow the Domestic Agency team to test the components manufactured for ITER in advance of shipment on a testbed that mimics the ITER on-site configuration.' The facility will also allow operators to gain experience running the diagnostic neutral beam system—correctly tuning the radio frequency drivers, synchronizing the power supplies, and 'learning the recipe' of running the equipment. Following the test campaign, expected to run between 2021 and 2024, the team has reserved time for assessment and eventual adjustment or refurbishment if needed. The bulk of the equipment will be installed during ITER's third assembly phase (2030-2031), in time for fusion power operation in 2035. 'We are getting close to an exciting phase in a very long-term project,' concludes Beatrix. 'From the first design work during the ITER engineering phase in the early 1990s, through input over the years from ELISE (a half-size source) and the design of the ITER Neutral Beam Test Facility, and finally a decade of work by the ITER India and ITER teams ... we are about to test the full diagnostic neutral beam system.' 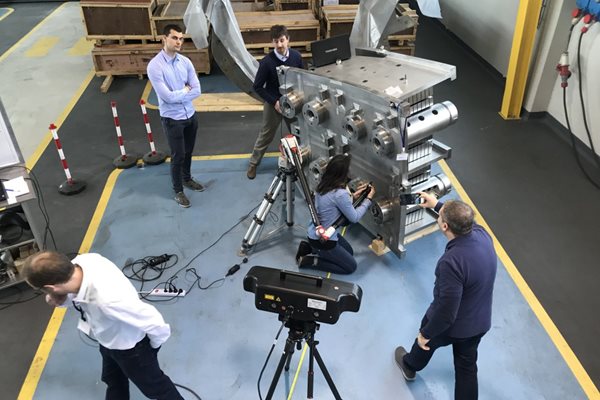 How do you position 150,000 welded attachments on to a vacuum vessel the size of a house, each one needing to be accurately placed to less than a 4 mm target? Traditional methods of marking and laying out—either by measuring from existing features, or using a template—do not work well on the ITER vacuum vessel; the complex curved shape and sheer quantity of attachments mean these old techniques are time-consuming and inherently inaccurate and error-prone. After investigating several alternatives, a team composed of ITER and European Domestic Agency (Fusion for Energy) specialists evaluated laser templating as the most appropriate technology for use during construction—a technique that does not burn a marking on to the component, but instead projects a pattern onto it with a safe, low-power laser. The welder then simply positions the component according to the projection. Although the use of the system is simple, the technology required to accurately project a component position onto a curved surface is complex. First, we need to know the shape of the vacuum vessel. This is done by using a large-volume laser scanning system that is very accurately measures a mesh of points on the component—and the ITER vacuum vessel will have millions of scan points. These 'point clouds' are then converted into a digital 3D model. Second, the projector needs to know where the component is. For this, a technique called stereophotogrammetry is used, in which a pair of cameras look for circular markers stuck on the component. Through image processing, the circular markers are detected in each camera—and because the angle and position of the cameras are known, the position of the projector can be determined through triangulation. With the component and projector position known, the laser beam is then scanned over the correct angles to create a projection on the component in the correct location. If the welder or the tool blocks the projection, projector is moved to a better location and the system realigns itself automatically. Laser templating has some massive advantages for quality too. Each projection will have a unique weld number projected at the same time, substantially reducing the chance that the welder will put the wrong component in the wrong place. And after installation, quality control can be improved by easily locating components for inspection. After the attachments are welded to the vacuum vessel, laser templating will be useful for aligning the sensors and components attached to them. And for the 75 km of in-vessel cabling that must be posed, the benefits of using the laser templating system to indicate the complex routing of the cables are obvious. As with all novel technologies, there are relatively few suppliers of laser templating systems. As operation of the equipment in a realistic environment was critical, the ITER/Fusion for Energy team evaluated two systems using a vacuum vessel mockup at Walter Tosto* (Chieti, Italy). Having performed quantitative metrology checks, and qualitative ease-of-use tests, the system provided by Extend 3D (Munchen, Germany) was determined to be best suited for ITER's use. The system is currently being used for process development and qualification by the Dynamic consortium, which has been awarded the TAC2 machine assembly contract, in preparation for the arrival of the first vacuum vessel sector. *Walter Tosto is part of the AMW consortium, which is supplying the five sectors of the ITER vacuum vessel under European procurement.

Can nuclear fusion save the world from climate catastrophe?

'Vigyan Samagam' to be held in Kolkata from Nov 4