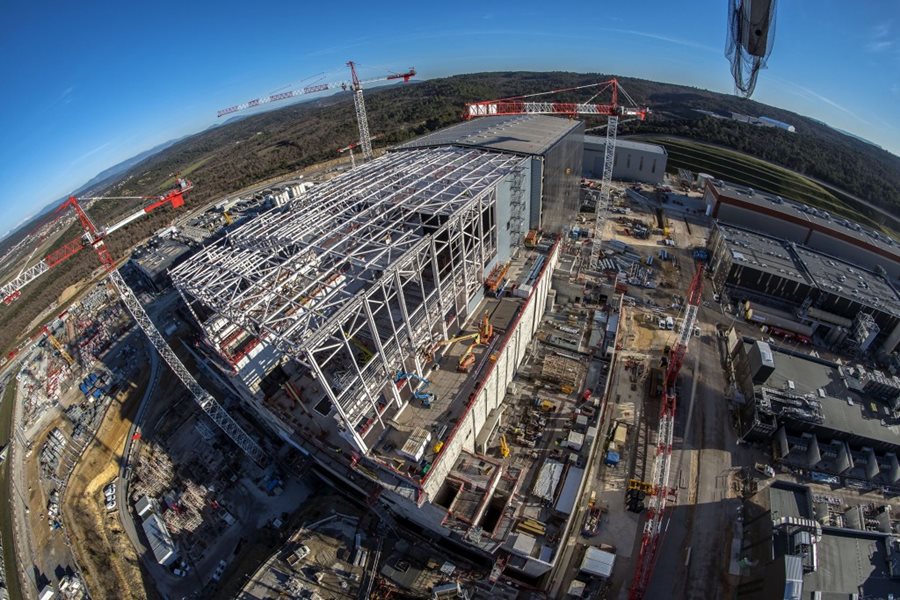 For the past three years, the view from the top of the highest worksite crane has not changed much. Inside of the Tokamak Complex, 80 metres below, concrete galleries took shape and progressively hid the circular structure of the bioshield—but the overall pattern of volume and shape remained largely unchanged. Then, at the turn of the year, the addition of a new feature completely recomposed the landscape. With the Tokamak Building now topped by the steel structure of its crane hall, the main building on the ITER worksite is just a step away from its final aspect. Another three or four months and the skeleton-like steel structure, whose first elements were installed last September, will be completely covered over in the signature cladding of the ITER buildings—11,000 square metres of alternating mirror-like stainless steel and dark grey-lacquered metal. From the outside, in conformity with the early architects' drawings, very little will distinguish the Assembly Hall from the Tokamak Building crane hall, matched as they are in height and nearly in width. This week, European Domestic Agency contractors will begin to lay crane rails on the thick runway beams that extend past the Tokamak pit, start installing the lateral steel beams across the front of the structure (now wide open) that will permit the installation of cladding in that area, and continue the dismantling of the temporary wall that has stood for years between the Assembly Hall and the Tokamak Building. (The black tarpaulin will stay in place for now to ensure weather tightness.) Within four weeks, a first layer of cladding should protect the entire structure. Towards the end of February, the assembly cranes will travel for the first time into the crane hall for testing and commissioning activities there. See more information about the ongoing works in the gallery below. 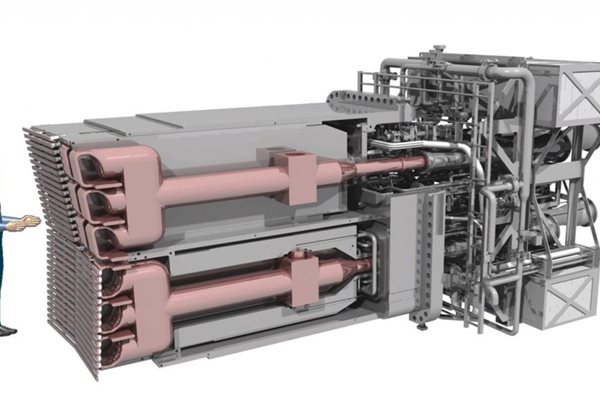 To power the ion cyclotron system, the ITER Organization and its partners are designing not only new antennas, which will be housed in the tokamak vessel, but also the robust transmission lines that will connect the antennas to radio frequency power sources two buildings away. One of three plasma heating systems on ITER, ion cyclotron resonance heating will deliver 20 MW to the plasma in the form of electromagnetic power at frequencies between 40 and 55 MHz, depending on the scenario. System parameters such as frequency, power or spectrum will be controlled in real time by the central control system, CODAC. At roughly 3.5 metres long, with a cross section of 2 x 2 metres and a weight between 45 and 50 tonnes, the antennas will be huge objects occupying two of the vacuum vessel's equatorial ports. Each antenna will have eight input transmission lines feeding into an array of 'current straps,' which face the plasma. 'We'll be firing a very large amount of power at a very small amount of matter,' says Bertrand Beaumont, leader of the Ion Cyclotron Lower Hybrid Section. '20 MW is something like the power needed to heat 2,000 houses during a European winter. As you might imagine, this much power delivered to about 1 gram of matter will cause the plasma to reach a very high temperature, very quickly.' From the local power grid to the vacuum vessel Getting that amount of power to the antennas is no small feat. Starting from the local power grid, using transformers and rectifying units, 22 KV of AC power will be transformed to 30 KV of DC power to feed the power amplifiers. The power from eight amplifiers, reaching up to 3 MW each, will then be transferred to the machine via rigid coaxial lines. The coaxial lines run from the Radio Frequency Building, where the transmitters and high voltage power supplies will be housed, through the Assembly Building to the Tokamak Building. An impedance matching system will sit at the point just before the lines penetrate the Tokamak Building, adapting the load of the antennas to the output load of the power amplifiers. 'The power amplifiers are based on the broadcasting technology that was used for the shortwave communications of very powerful radio systems, such as Voice of America,' says Beaumont. 'What we're doing is a continuation of that standard technology. What's different is that our level of power is much higher. So we have to combine power from a number of amplifiers to get the unit power we need in each of the transmission lines.' 'In one transmission line we want to transmit 3 MW. To do this, we use rigid coaxial lines, which are around 300 mm in diameter. The lines use straight runs, bends, and are also fitted with switches and measurement points. The inner conductors are supported by ceramic, and the insulating dielectric gas running inside is controlled and pressurized.' Taking proven technology to new levels The ITER ion cyclotron is not required for First Plasma, but at the very earliest for the first pre-fusion power operation campaign (beginning December 2028). 'It is still years away,' says Beaumont. 'Even though we're working with proven technology, we're taking that technology to new limits. It's going to take a lot of time to pull it all together with our partners.' ITER Organization is already very busy working to the targets—and so are the three contributing Domestic Agencies: Europe, India and the United States. While the ITER Organization is developing the comprehensive design of the antenna, responsibility for procurement lies with the European Domestic Agency. The preliminary design of the antenna is expected to be completed by the end of 2020, and the final design by the end of 2022. Europe expects to complete the Radio Frequency Building by the middle of 2020. The ITER Organization is developing the interfaces with the Tokamak Building, ensuring both the confinement and fire zone boundaries at the points where the coaxial cables enter. The Indian Domestic Agency is providing the radio frequency transmitters and roughly half the high voltage power supplies, customizing existing technology. The ITER Organization will procure the other half of the high voltage power supplies. The US Domestic Agency is developing the transmission line and matching system, using simulation tools and high-power tests in a dedicated lab. The team there expects to start production soon, to ensure delivery of the transmission lines in time for integration with the transmitter and high voltage power supplies during the assembly phase leading up to First Plasma. 'We're drawing on a big base of knowledge from JET and other experimental reactors that used ion cyclotron systems,' says Beaumont. 'Using scaling laws, we have taken what has been proven to work and extrapolated to our target power levels and duration. Our ultimate target is to provide power for a pulse lasting 1 hour, with a power amplification ratio (Q) equal to 5. We're designing the whole system to reach that target.'

10 years ago in Newsline | White, silent and immobile 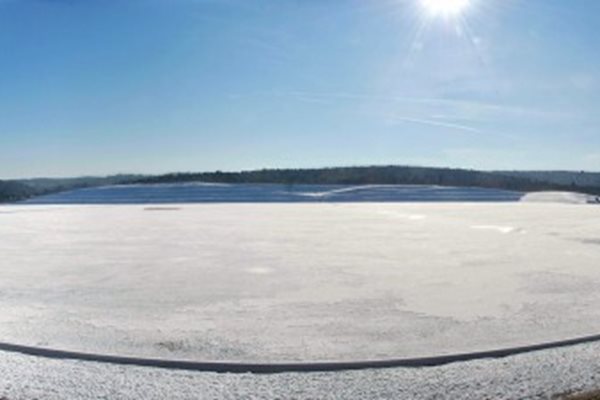 Ten years ago, in mid-January 2010, heavy snow fell on Provence and the white blanket that settled on the ITER platform accentuated its main feature: utter emptiness. Following three years of clearing and levelling under the responsibility of Agence Iter France, the platform was ready but had not yet been invested by construction workers. On the clear day this panoramic picture was taken, everything seemed to be silent and immobile. A brown trace to the left of the image marks the shallow depression that would later become home to the Tokamak Complex. On the opposite side of the panorama, behind a hedge of firs at the foot of the platform, a lone office building is visible: a little more than a year earlier, approximately 400 ITER staff members had moved from portacabins inside the CEA enclosure into this prefabricated construction which served as temporary headquarters until November 2012. Although there is nothing much to see on the ITER platform, a viewpoint with a site map is already available for visitors. One of the visitors that ITER welcomed that same week this picture was taken was none other than His Serene Highness Prince Albert II of Monaco, the ruler of the 180-hectare Mediterranean principality (comparable in surface to the ITER site). 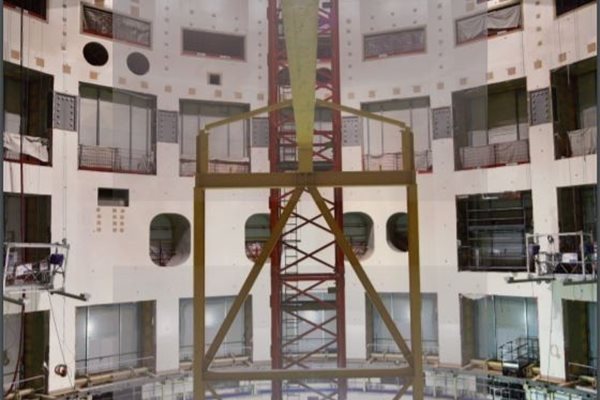 Nuclear fusion no longer a 30-year dream away

Could I turn this place so upside-down? (Your word for me is fusion)

Assystem takes a STEP towards fusion

The Close-Up of Remote Solutions