Deliveries | Two coils on their way 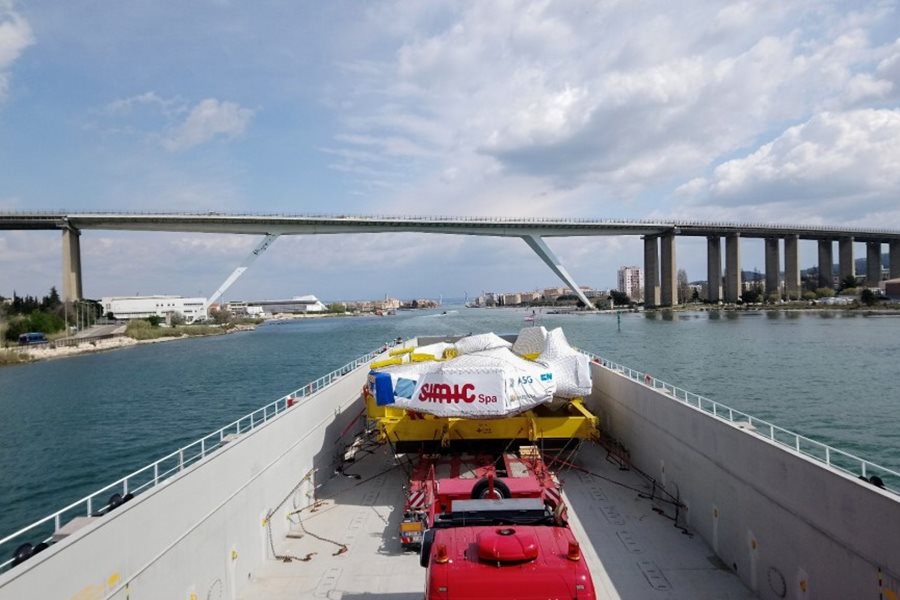 For the past five years, 'highly exceptional loads' (HEL) have been successfully travelling along the ITER Itinerary to be delivered to the ITER site. As the project now enters machine assembly phase, a new category of components is heading to Saint-Paul-lez-Durance. Dubbed 'super HEL,' they combine exceptional value, size and weight and come with renewed challenges which the global health crisis makes even more daunting. Two such components recently arrived at Marseille's industrial harbour Fos-sur-Mer, and will soon be delivered to the ITER site. Procured by Europe and finalized in Italy, toroidal field coil #9 (TF9) was unloaded on 18 March and crossed the inland sea Etang-de-Berre five days later. A second toroidal field coil (TF12), procured by Japan, left the port of Kobe on 7 March and arrived at Fos-sur-Mer on 7 April—one month later to the day. Over the past five years, 75 HEL have been safely delivered to ITER. None, however, matched the dimensions and weight—20 metres long, slightly more than 10 metres wide, 600 tonnes with support frame and trailer—of these 'Super HEL,' the first in a series of two dozen truly exceptional loads to be delivered in the next few years. To the challenges of transporting such behemoths over the 104-kilometre ITER Itinerary, the global health crisis has added extra constraints. The organization of the convoys, the logistics and the schedule all needed to be adapted to mitigate risk for the loads and guarantee optimal health and safety conditions for the personnel involved. According to the latest information, the operation will unfold as follows: TF9 will leave its temporary staging area on the northern shore of Etang-de-Berre on 13 April, Easter Monday, and reach the ITER site in the early morning of 17 April. As soon as the component is unloaded, the trailer will be disassembled, shipped back to Berre by truck, and reassembled there. Ideally the trailer, by then loaded with TF12, could be ready to travel on 21 April and arrive at ITER in the early hours of Saturday 25 April. ITER convoys do not travel on weekends or holidays, but an exception was made for this unique situation. 'The French authorities, the gendarmerie, and the thruway operators have all been extremely supportive,' says François Genevey, who manages ITER transport operations for the project's global logistics provider DAHER. 'Everyone is aware of the importance and challenges of this double operation.' 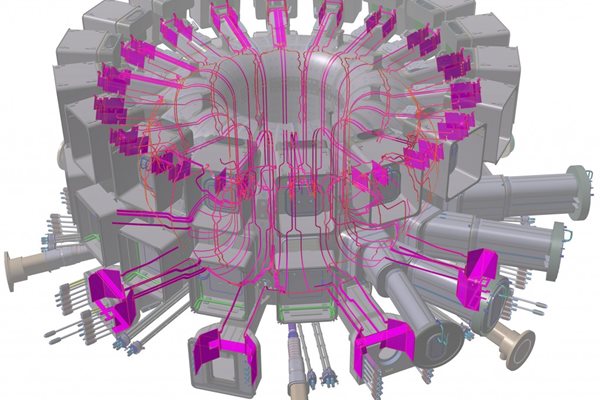 Assembly preparation | Off goes the lid 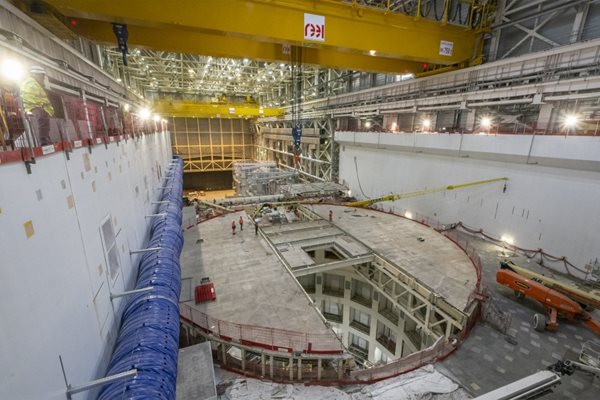 In the summer of 2017, a circular platform was installed inside of the large steel-and-concrete cylinder of the Tokamak pit. The 200-tonne structure was meant to protect the workers active in the lower levels while providing storage for activities above. The following year, the platform was hoisted some 20 metres to form a temporary roof, where it remained for two years. And finally, last week, the time had come to remove the massive 'lid' to allow access to the pit in anticipation of the machine assembly phase. In two days, the 11 segments of the structure were dismantled, lifted and safely stored to be re-used at a later stage of ITER operations. In the vast open space of the assembly theatre the powerful overhead cranes were back at work, lifting the lid's segments one by one, transporting them from one hall to the other, and delicately depositing them on the vehicles that would take them to storage—a regular flat-bed trailer for the smaller segments (10 to 20 tonnes), a dedicated self-propelled modular transporter for the two 'half moons' weighing close to 80 tonnes each (more details in the image gallery below). The intense activity in the crane hall, with several elevated platforms moving painters along the rafters just below the crane runway, plus space limitations in the adjacent assembly hall where the upending tool was being prepared for another set of tests, added constraints to the already challenging operation. But the well-oiled team, once again, proved up to the task. Access to the Tokamak pit is now open to the overhead cranes. 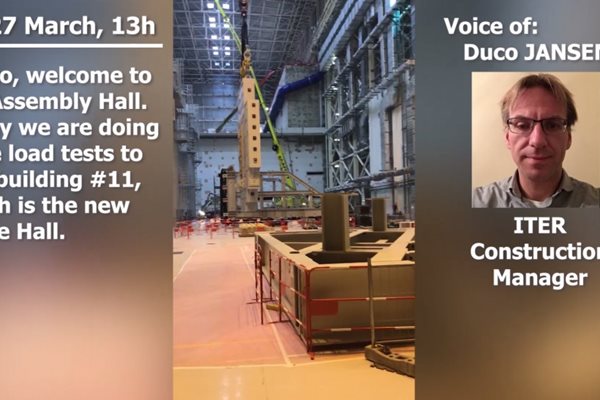 This new video in our "ITER NOW" series provides an insider's view of the recent load tests performed as the ITER Organization prepares for the machine assembly phase. Join ITER Construction manager Duco Jansen on the workshop floor as he describes and comments on the operations underway. Click here to view the video.

All for one: Scientists find interactions threading through fusion plasmas crucial for stability

China's Artificial sun will be Ready This Year

Surprising discovery could have impact on use of engineering materials

Why we'll succeed in saving the planet from climate change

How far are we from a nuclear fusion future? (Future Tense podcast, 29'08")