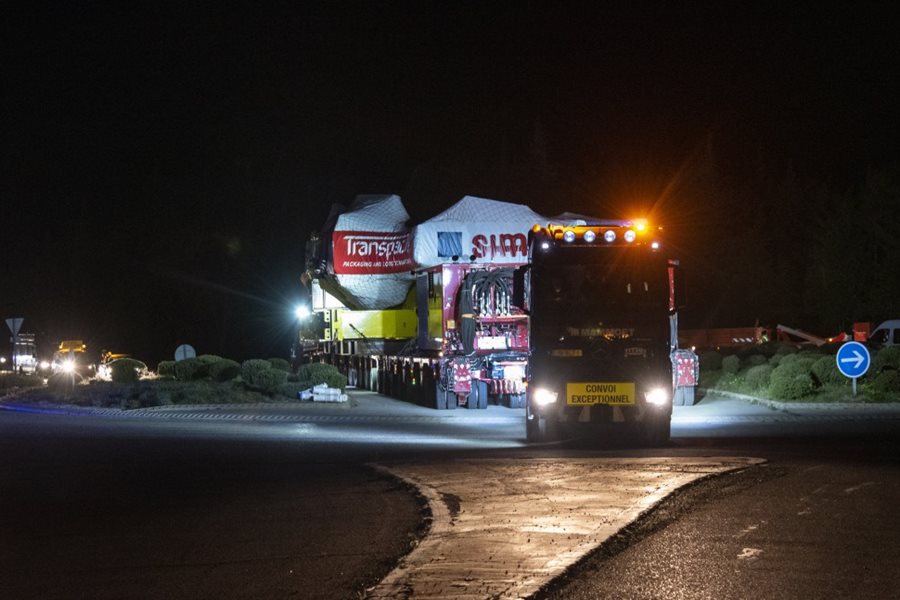 For close to ten years we have watched it slowly come to life. We have witnessed the manufacturing of the niobium-tin strands, the cabling and jacketing of conductor, the machining of radial plates, the insertion into the steel case... And there it was, a strange shape in its transport frame, tightly wrapped in protective material and sitting on a 342-wheel trailer: the first of the 18 D-shaped toroidal field coils required for the ITER machine. Procured by Europe and finalized in Italy, toroidal field coil #9 (TF9) travelled on the last leg of its long journey during the night of 16 April to 17 April—a 19-kilometre stretch from the French village of Peyrolles to the ITER construction site that included plane-tree-lined roads, a purpose-built bridge and a narrow passage between two cliffs that was widened in the summer of 2018. At some points along the way, the width of the roadway barely exceeded that of the convoy. At others, overhanging branches had to be pruned ahead of the component's passage by an advance team. Following a carefully defined trajectory, the convoy progressed slowly and steadily, at times as slow as walking pace. Not only was the load more than 10 metres wide, it was also exceptionally heavy—with the combined weight of the coil, the transport frame and the trailer, the convoy exceeded 600 tonnes. In order to pull such a behemoth, Mammoet, the Dutch company contracted by ITER global logistics provider DAHER, had designed a unique transport vehicle: a 342-wheel, self-propelled modular transporter powered by a pair of 1,000 hp 'power packs.' A little before 2:00 a.m. on 17 April, the convoy reached the ITER gates. Once again, the many parties involved in the complex logistics of an ITER convoy—Agence Iter France, DAHER, the Mammoet crew, French gendarmerie forces, escort and technical assistance personnel—had performed faultlessly. There are still 18 other toroidal field coils to be delivered (18 required by the machine plus one spare). The next, TF12 from Japan, is expected on the ITER site on Saturday 25 April. Read more about the first toroidal field coil to be delivered on Fusion for Energy's website. 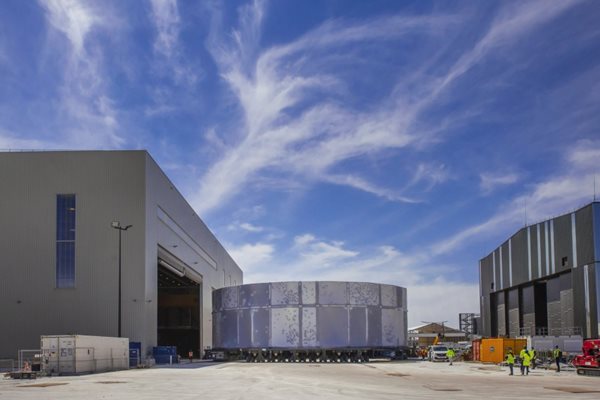 For a few minutes, the Cryostat Workshop resounded with Beethoven's 'Ode to Joy.' It was a strange moment, both solemn and poignant. Before long, the self-propelled trailer transporting the base section of the ITER cryostat began to move towards the mega-door facing the Assembly Hall and, soon, the vast hall that had teemed with activity for almost five years stood empty and silent. It will remain so until the segments of the fourth and final section of the cryostat (the top lid) are delivered in July to be assembled and welded. Two days before, on Wednesday 15 April, the upper cylinder had made a similar exit, but instead of being delivered to the Assembly Hall, it was moved to a dedicated storage area to be positioned next to its near-twin, the lower cylinder. Watching these two huge components slowly crawl out of their birthplace gave a sense of the exceptional dimensions of the ITER Tokamak. It also signalled just how close ITER is to the beginning of the assembly phase. Once inside the Assembly Hall, directly underneath the beams of the overhead crane, the 1,250-tonne base section appeared ready to undertake the 170-metre-long journey to the mouth of the Tokamak pit. The ITER cryostat—the largest stainless steel high-vacuum pressure chamber ever built (16,000 m³)—will provide a high vacuum, ultra-cool environment for the ITER vacuum vessel and superconducting magnets. The Indian Domestic Agency has collaborated with main contractor Larsen & Toubro Heavy Engineering (manufacturing design, segment fabrication in India and assembly at ITER); MAN Energy Solutions, Germany (Larsen & Toubro sub-contractor for on-site welding); and SPIE Batignolles TPCI, France (Larsen & Toubro sub-contractor for the realization of the Cryostat Workshop) to deliver the components to specification and on time. See aerial footage of the transfer operations in the latest ITER NOW video. 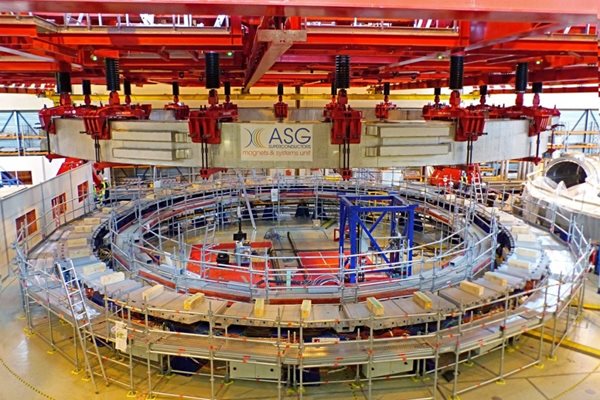 In a spacious manufacturing facility on site, Europe's first production poloidal field coil has been transferred to the final assembly station. Contractors used a 400-tonne gantry crane to lift the coil on 11 April. From the start of coil winding activities in September 2017, to the resin impregnation of the fully formed coil last month, the realization of poloidal field coil #5 (PF5) has been a meticulous, stage-by-stage process. It is now just one step from completion, as the coil has been moved to the final workstation for cleaning, testing (dimensional and electrical), covering and clamping. Nearly 12 kilometres of niobium-titanium (NbTi) conductor have gone into the winding of PF5, which is formed from eight individually impregnated double pancakes. The pancakes were stacked, joined electrically, and wrapped in ground insulation (glass/kapton tape) in preparation for vacuum pressure impregnation—a process that confers rigidity to the final winding pack and insulates the coil electrically. Impregnation took place in March. First, all air was pumped out of the mould that had been built around the winding pack. Then the mould was heated (90 °C for 96 hours) to dry the coil insulation and then cooled (to 50 °C). Over a period of 60 hours, approximately 3,000 litres of resin were injected under pressure, and the resin was allowed to 'gel.' Finally, the resin was 'cured' for 60 hours. On 11 April, the 280-tonne PF5 winding pack was gently lifted by gantry crane and transferred to the last production station of the facility—final assembly. After the mould is removed and final covers and clamps are attached, the final weight of the coil will be 342 tonnes. Read a full report on the Fusion for Energy website. 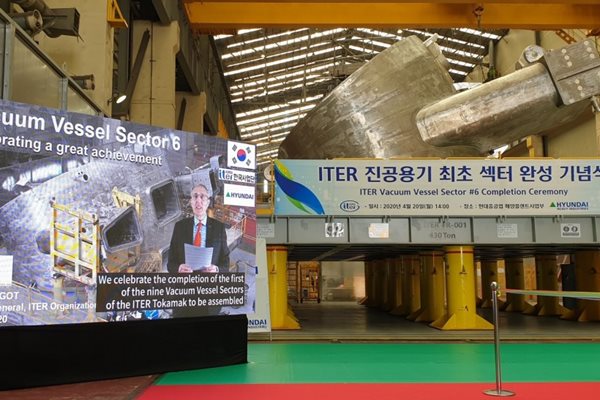 A ceremony was held today, 20 April, in Ulsan, South Korea, to mark the completion of the first ITER vacuum vessel sector. This remarkable piece of tokamak engineering has been more than 10 years in the making. Vacuum vessel sector #6—the first-completed segment of the vacuum vessel construction program—is ready to leave the workshops of Hyundai Heavy Industries in Ulsan, Korea, for shipment to ITER. The 440-tonne, double-walled vessel is nearly 14 metres in height, 6 metres in width and 8 metres in length. Nine sectors in all—four procured by the Korean Domestic Agency and five procured by the European Domestic Agency—will be assembled and welded at ITER. Due to worldwide travel restrictions, ITER Director-General Bernard Bigot participated in today's ceremony remotely. 'Today is a very special day for ITER Project, a true landmark. Every engineer who has been involved in the design and manufacture of this remarkable piece of tokamak engineering understands the unprecedented nature of this challenge. With exceptionally complex geometries, 1,380 metres of intricate welding, internal in-wall shielding blocks and cooling water channels, hundreds of interfaces to other components, and very strict nuclear safety compliance requirements, it has been difficult—I might say 'painful' and nearly impossible—at times. Each step has been challenging, from manufacturing qualification, machining, and welding, to non-destructive examination and verifying tolerances. Hundreds of people have been involved in the design and manufacture of this challenging first-of-a-kind component. Today, they are all present in our mind.' The ITER Director-General thanked members of the Korean government, Hyundai Heavy Industries, the Korean Domestic Agency, the ITER Vacuum Vessel Project Team, and key ITER staff for the successful accomplishment of this milestone. The ITER Newsline will have a full technical report on 27 April.