Technology | Perfecting tritium breeding for DEMO and beyond 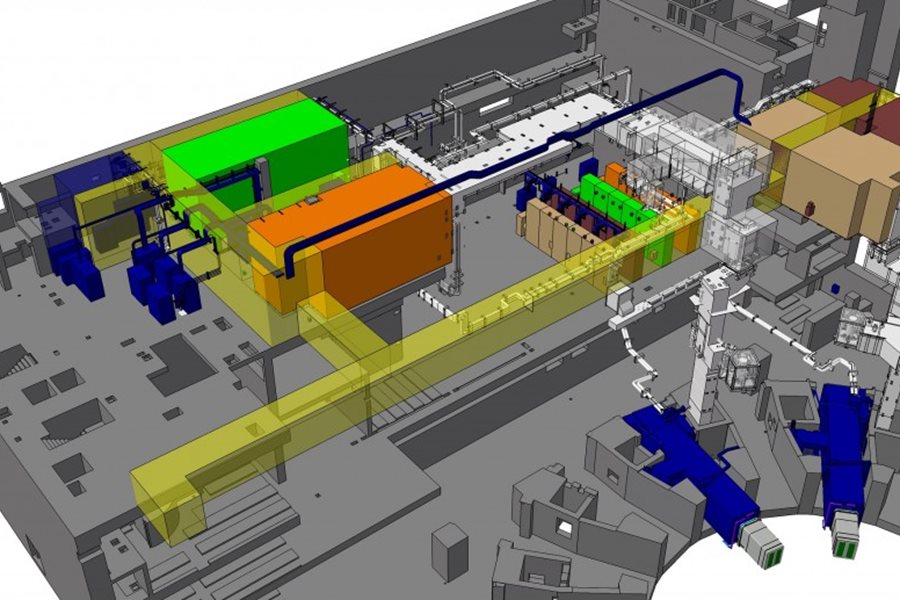 While ITER will never breed tritium for its own consumption, it will test breeding blanket concepts—the tools and techniques that designers of future DEMO reactors will need to achieve tritium self-sufficiency. Because a tritium breeding blanket will be a fundamental feature of commercial fusion reactors, several ITER Members are now participating in the ITER Test Blanket Module (TBM) Program, which aims to test mockups of relevant DEMO* blanket systems To improve coordination and accelerate decision-making, the ITER Council endorsed the TBM Project Team (TBM-PT) in June 2017. Mario Merola, head of the Internal Components Division, has led the team since 1 January 2020. Evaluating and testing design options One of the jobs of the TBM-PT is to assess the test blanket system designs proposed by ITER Members, and ensure that each design meets requirements and integrates with other ITER systems. The TBM-PT will also oversee the fabrication, installation and operations of the various system concepts. Test blanket modules are steel boxes that face the plasma, measuring approximately 1.7 x 0.5 x 0.6 metres. Four of them will be plugged into two different equatorial ports of the machine, each containing a lithium compound. The neutrons spewing from the plasma will strike the lithium to initiate a nuclear reaction that produces tritium, helium and heat. In a DEMO reactor, the tritium will be extracted and used as fuel, the helium will be a harmless byproduct, and the heat from the reaction will be used to produce more electricity—a bonus of up to 20 percent more output from the plasma fusion power. 'I think of the test blanket modules as the tip of the iceberg,' says Merola. 'Behind the steel boxes are enormous ancillary systems.' Some of these systems will extract the tritium, process it, and account for it. Others will remove the heat and channel it to where it can be used to demonstrate the feasibility of generating electricity in a future fusion power plant. Still other systems will purify the coolant and take measurements to monitor the test blanket systems, and collect essential data that can be extrapolated to help in designing DEMO blankets. The four different test blanket systems (module plus ancillary systems) that will be installed in ITER will be used to test different combinations of design options: a liquid metal breeder versus solid breeders, and helium coolant versus water coolant. The liquid breeder is lithium-lead, which becomes liquid at 235 °C. The main advantage of this breeder is that it can be refueled during operation. But a challenge is that liquid breeders interact with the magnetic fields. To overcome this problem, the lithium-lead has to either flow at a low velocity or be electrically isolated from the metallic walls. Solid breeders do not interfere with magnetic fields, but they cannot be refilled online. Instead, they have to be replaced from time to time—an operation that requires the reactor to be stopped so the exhausted breeder can be replaced. As far as coolants go, water has the advantage of being well known through years of use in fission reactors. But water has one big disadvantage when it comes to extracting heat: without high pressure, water cannot be raised to the temperatures needed for efficient conversion between thermal and electric energy. Helium, on the other hand, can be brought up to 500 to 600 °C, but it has the disadvantage of a much lower heat capacity. To compensate, a higher flow velocity is required, which means higher pumping power. Improving the models to inform future designs Simulations can be used to predict the behaviour of the test blanket systems, but the models underpinning the simulations have to be validated through a set of experiments. These experiments on ITER will also help to further understand the parameters that can be used to tune the breeding process. 'There are different ways of tuning the efficiency of tritium production,' says Merola. 'For example, altering the density of the breeding material or using neutron multipliers. There are also different ways of tuning the process of extracting the tritium, of separating it from other gases, and of re-injecting it into the plasma.' The ITER TBM Program will test the test blanket systems separately in order to determine the advantages and drawbacks of each concept. The program will also gain experience over the years to help determine which components need to be replaced, and how often. 'These are all things that are not yet fully understood, because there is no breeder blanket tokamak anywhere in the world,' says Merola. 'We will be on the front line of fusion research, taking an essential step towards DEMO.' *DEMO: the general term for next-phase DEMOnstration fusion reactor projects. Different conceptual DEMO projects are under consideration by all ITER Members.

Cryolines | Another day, another spool 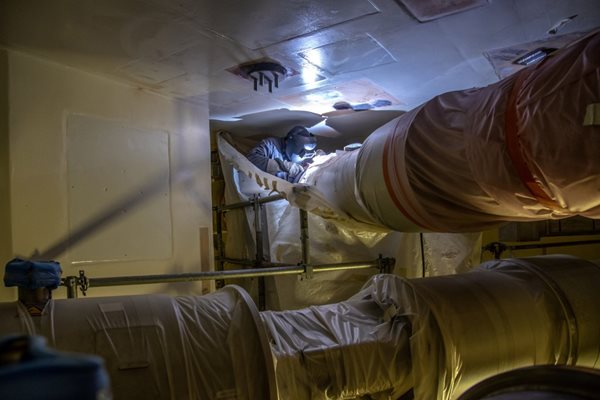 Having wedged his body and equipment into the cramped space between the ceiling and the massive pipe, a worker is busy welding two cryolines spools. A few metres below, others are adjusting the length of the inner pipes of the 'multi-process' cryolines with a hacksaw. Throughout the galleries in the basement of the Tokamak Building, activity is intense. Nine months after installation work began, approximately two-thirds of the cryoline spools are now in place in the lowest basement level (B2) of the Tokamak Building.   The cryolines transport the helium needed to cool different elements of the ITER Tokamak at different temperatures. From the cryoplant, where the fluids are processed, the network travels approximately 300 metres over a bridge to the Tokamak Building.   The better part of the network ends up in the basement of the building at level B2, where it ramifies and branches to the coil termination boxes of some 30 magnet feeders.   A cryoline section, measuring 2 to 10 metres in length and 40 to 100 centimetres in diameter, is more than just a pipe. It is a sophisticated component that accommodates up to seven different process pipes, each carefully insulated and devoted to a specific fluid, flow, direction or function. There are approximately 500 such sections, or spools, to be installed inside the Tokamak Building.   One of the challenges of the installation work is the precise positioning of each spool within a tolerance range of 5 millimetres; another is the quality of the welds connecting the sections—including both individual inner pipes and the external jacket that accommodates them. A vacuum vessel in its own right, the six-kilometre long cryoline network must be perfectly leak and vacuum tight.   Once all the spools are all in place at the B2 level, the network of cryolines will be extended in two directions: laterally towards the magnet feeders in an area called the 'mezzanine,' and upwards through large shafts to the L3 level of the building to meet the massive pipes and distribution boxes that are connected to the cryoplant.   The ITER construction teams expect installation to be completed this autumn.

Image of the week | Bearings unveiled 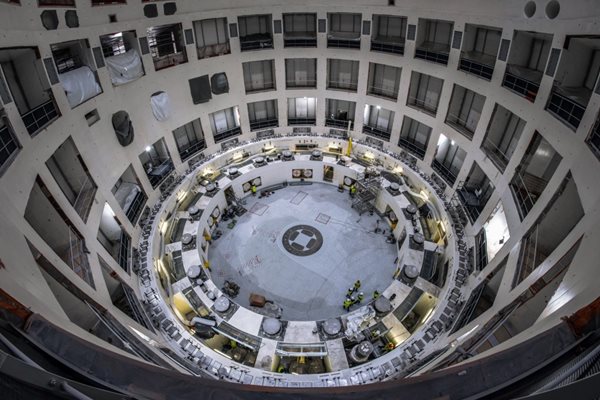 The construction teams are in the last stages of preparing the Tokamak pit for the first major operation of ITER machine assembly: the lowering of the cryostat base onto supports in the Tokamak pit. Around the concrete 'crown," female lugs have been precisely adjusted, and the protective coverings have been removed from the 18 cryostat bearings that were installed six months ago. The circular shape at the very centre of the pit is a set of deeply embedded plates designed to anchor the central column of the in-pit assembly tool. This tool will support, align, and stabilize the vacuum vessel sub-assemblies as they are progressively joined and welded. By mid-week, the Tokamak pit will be perfectly clean and ready to receive the 1,250-tonne cryostat base, an operation both delicate and spectacular that will open a new chapter in the history of ITER. 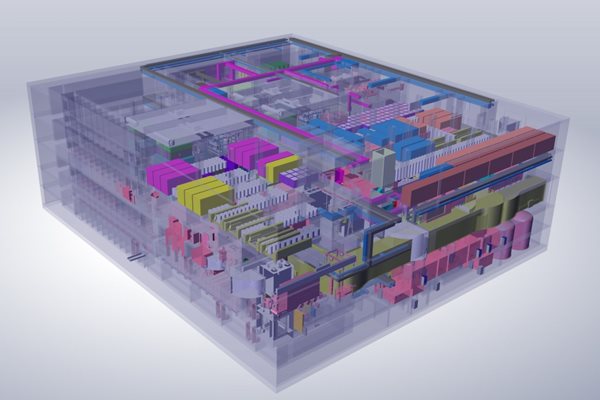 The next STEP to fusion: Interview with Professor Howard Wilson

NTT: Conclusion of a Cooperation Agreement with ITER