After enduring a battery of rigorous tests, the first of seven superconducting magnet modules that will make up the beating heart of the ITER international fusion reactor has earned a clean bill of health. As expected for such a first-of-its-kind device, engineers encountered and overcame challenges over two years of deliberate probing, said Kathy McCarthy, associate laboratory director for Oak Ridge National Laboratory's (ORNL's) Fusion and Fission Energy and Science Directorate and director of the US ITER Project. 'This module went through rigorous testing and emerged much better for it,' McCarthy said. 'The tougher the vetting, the higher the confidence in the central solenoid's performance. And we are now confident.' The module, built at San Diego-based General Atomics under the direction of the US ITER project headquartered at ORNL, will head to France later this year, where ITER assembly is already underway. In due course, it will be followed by six companion modules (one to serve as a spare) now in production that will together form ITER's central solenoid, one of the most complex and challenging magnet systems ever built. The successful testing of the first module is a crucial milestone for the ambitious ITER Project. Although the central solenoid has also been likened to a backbone with its coils stacked like vertebrae, the heart may be the more apt metaphor. The 45,000 amps of electricity that will course like blood through its niobium-tin wires will generate a strong magnetic field that plays the critical role of steering and shaping an intensely hot, energy-producing plasma circling around it. 'There is no ITER without the central solenoid,' said David Everitt, US ITER's central solenoid systems manager. The central solenoid is one of 12 hardware systems that US ITER, funded by the Department of Energy Office of Science Fusion Energy Sciences, is providing to the project. As the first of the solenoid modules, the 4.3-metre-wide, 113-tonne module was subjected to a series of demanding tests throughout and after its production at General Atomics and components were evaluated at SULTAN, a facility in Switzerland that tests high-current superconductors. The module was subjected to the same extreme conditions it will face at ITER, including vacuum, high current and frigid temperatures (4 K, or minus 270 degrees Celsius) required for niobium-tin to be a superconductor. One of the thorniest problems the team had to solve was created by the coaxial joints that connect the module to its power source to generate a magnetic field. Because of the extreme cold required for superconducting, any heat-creating resistance that might occur across the numerous joints in the system had to be kept to an absolute minimum—within just a few billionths of an ohm—so as not to overheat the precious liquid helium that keeps the magnet cold. While some joints exceeded these demanding requirements, the coaxial joints fell short, and it took the better part of two years to troubleshoot the issue. Repeatedly disassembling and reassembling the joints, the team cycled through a series of approaches, eventually arriving at a redesign that kept resistance within the project's strict parameters. A design modification also resulted from another skull-scratcher engineers encountered with the coil's quench detection system. If the current anywhere along the 5.6 km of superconductor in the module encounters too much resistance, the resulting heat can raise the magnet above the frigid temperatures required for it to operate—prompting an event called a quench. Tests revealed that, due to an incompatibility between the coating on quench detection wires and the epoxy used to insulate the superconducting cables, the wires could crack. After months of troubleshooting, the team engineered a solution that cleared a high but critical hurdle, called a Paschen test, that assessed the system's performance under the more demanding conditions of a vacuum.   'If you can pass these severe Paschen tests,' said Everitt, 'you can have very high confidence in your insulation system.' The vetting process required time and patience. But engineers deftly adapted, said Graham Rossano, US ITER's technical division director. 'The team has done a good job of maintaining production and testing throughout the pandemic. And we're confident of the performance because we did full-power testing at temperature.' Numerous other partners contributed to the success as well—from ITER Japan which provided the superconductor, to staff at the ITER Organization, vendors and external advisors. 'It's amazing thinking how many heartbeats have gone into this thing,' Everitt said. Lessons learned on this first module have been applied to the fabrication of subsequent coils. The second module is now undergoing its own battery of tests and is expected to ship to ITER just after the first in mid-2021. As knowledge is shared throughout the broader scientific community, this pioneering work will also benefit efforts outside of ITER and help advance future magnets for fusion and other applications. See the original story on the US ITER website. 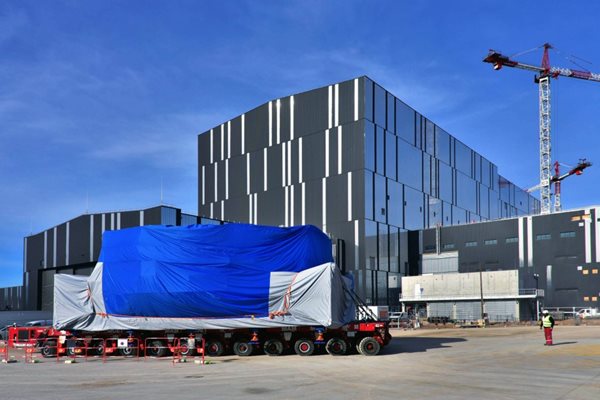 A long journey from China, followed by a month-long cold bath and now the perspective of a six-week rest in storage—this is what life has been like, so far, for poloidal field coil #6. On Wednesday 27 January, the massive component was transferred from the European winding facility on site, where it had successfully completed cold tests, to a storage facility where it will patiently wait for its turn in the assembly sequence of the ITER machine. Along with the physical move came a change of ownership, as the coil was handed over by the European Domestic Agency Fusion for Energy, responsible for its procurement, to the ITER Organization, in charge of machine assembly. Manufactured in China under a European contract, the coil was more than eight years in fabrication. It is the second smallest of the six ITER ring-shaped magnets (11.5 metres in diameter) but, at 400 tonnes, is by far the heaviest. The coil was delivered to ITER in June 2020 and was the first to be cold-tested on site. Some light equipment work (such as the addition of protective covers) will be performed while the component is in storage and before it takes one last (short) trip in April to be lowered into the assembly pit. For a few years, the coil will sit at the bottom of the pit on temporary supports before being raised to its final position towards the end of the assembly process when all 18 toroidal field coils and 9 vacuum vessel sectors have been installed. Read more  about the transfer on the Fusion for Energy website. 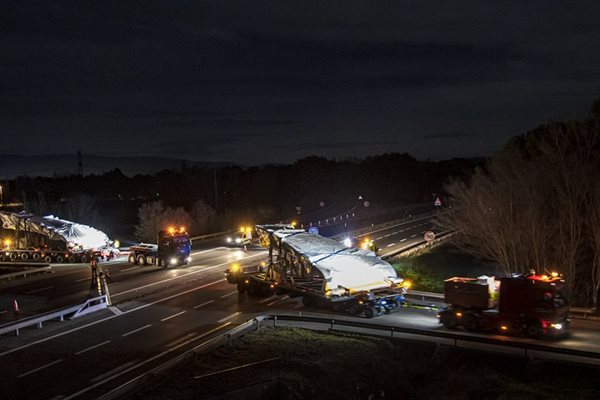 On a cold January morning six years ago, the first in a long series of 'Highly Exceptional Loads' made its way through the ITER gates. Procured by the US and manufactured in Korea, the 90-tonne high-voltage transformer had travelled by container ship, barge and eventually trailer—a 9,000-kilometre journey by sea and a final 104-kilometre stretch along the 'ITER Itinerary.' In the years that followed, more than one hundred loads would be delivered to the ITER construction site, many of them larger, longer and much heavier. At dawn on Friday 29 January, yet another convoy—the 50th in six years—entered the ITER premises to deliver the last two segments of the cryostat top lid. Once again, the massive, high-precision logistics involved in component delivery were on full display, with no fewer than three dozen vehicles and close to one hundred people—a full squadron of specialized gendarmes among them. Because each component is unique, a convoy along the ITER Itinerary is never routine. The speed and the trajectory of the trailer along the entire route are determined by component dimensions and weight, as well as the gravity centre of the load. Once calculated and modelized, the instructions are fed to the drivers' tablet, and must be faultlessly observed. Road signage needs to be removed before the passage of the convoy and reinstalled immediately after. Gendarmes on motor scooters are tasked with opening and closing intersections to ensure that both the convoy and the public are safe. As part of the planning for every convoy, thruway employees manage the night-long closure to traffic and reopening the following morning. Six years of experience have taught the participating parties many lessons. The carefully staged operation has acquired an agility that considerably reduces each convoy's impact on the local population—an important parameter, as approximately 100 others are scheduled before First Plasma. View a short video of the 50th ITER convoy. See some of the highlights of the past six years along the ITER Itinerary in the gallery below.

Due to Covid-19 pandemic and related global restrictions, the Local Organizing Committee of the 28th IAEA Fusion Energy Conference (FEC2020) has decided, in collaboration with the IAEA, to hold the conference on a virtual platform with the same dates maintained, from 10- 15 May 2021. In addition to a full program, which will be available globally in appropriate time zones for each audience, we will also ensure opportunities for sponsoring and networking. If you are a potential sponsor and interested in finding out more about these opportunities, you can contact us at sponsor@fec2020.fr.  Consult the FEC 2020 scientific program here. Registration opens on 1 March 2021; more information at https://fec2020.fr/.

A growing part of the fusion community