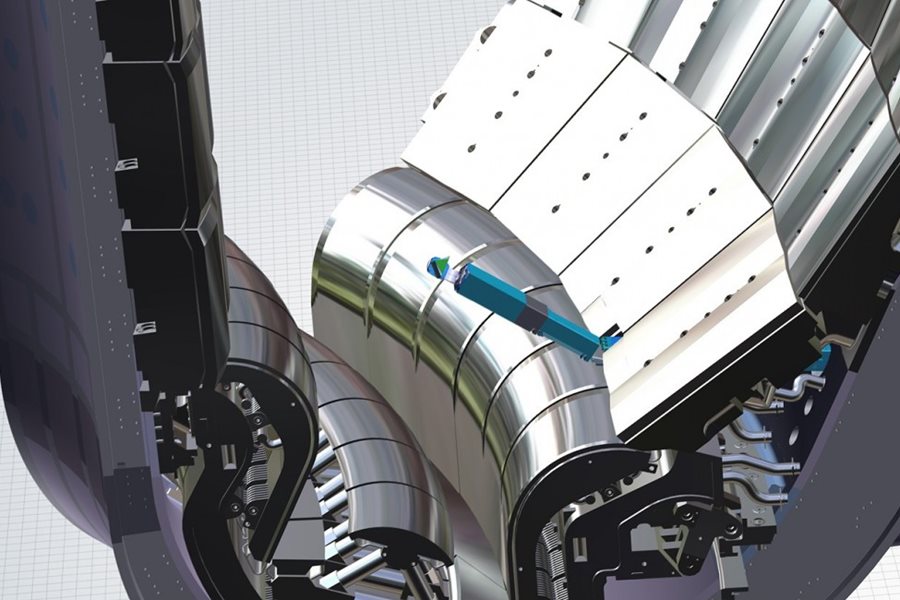 While challenging to build, a system that provides 2D and 3D images of the ITER in-vessel components hours after a plasma shot makes operating fusion devices safer and easier. Europe has taken steps towards delivering another first: ITER's in-vessel viewing system. For the first time, electromechanical arms equipped with laser-scanning systems will reside inside a fusion device. During a pulse, the arms will be folded into cartridges hosted inside vacuum vessel port extensions away from the plasma. Then, when operators want to examine plasma-facing surfaces, they will engage some combination of the six in-vessel viewing systems that will be distributed as evenly as possible in lower ports. Once engaged, the equipment will deploy from its cartridge, and the arm will go straight out on rails until it reaches the interior of the vessel. From there it can tilt up to 75 degrees. To view the inner surfaces of the plasma chamber, the system will use LIDAR technology, firing a laser beam onto a plasma-facing surface and collecting the reflected light. Each laser shot will result in a single point. By firing millions of beams in carefully planned patterns and combining the resulting points, the system will construct ultra-high-resolution 2D images and 3D clouds-of-points. 'With six of these systems in six different ports, we will be able to visualize more than 95% of the plasma-facing components,' says Aakanksha Saxena, responsible officer of the in-vessel viewing system at the ITER Organization. 'The reason some areas won't be seen is simply because they will not be in line of sight.' The system will also help solve another important problem—that of measuring erosion. Erosion can be detected by measuring hills and valleys that form when material is deposited on (or removed from) surfaces. To establish a baseline, a scan will be performed before ITER is turned on. Then subsequent scans can be compared to the initial state to make sure erosion does not exceed the limits imposed by the French authorities on nuclear safety. A unique set of challenges for an opto-electro-mechanical system The in-vessel viewing system will save time and money by allowing observations during the night shift, when no pulses are run. But building a system that operates just hours after a pulse is no easy task. 'The environment is worse than on Mars,' says Gregory Dubus, project manager for the system at Fusion for Energy, the European organization managing Europe's contribution to ITER. 'Our system is required to withstand a unique combination of environmental conditions while keeping up with its expected level of performance. Gamma radiation, neutrons, heat, ultra-high vacuum and a permanent multi-tesla magnetic field make system design and component selection a real challenge.' The vessel will still be in a vacuum, an environment in which complicated electromechanical systems tend to block. For example, conventional lubricants change state and lose their lubricating properties, resulting in more friction. The friction could then provoke jamming and it could wear on the moving parts. In addition, when exposed to heat and a vacuum, components tend to release gas—a process known as outgassing, which often ruins a vacuum. To overcome such hazards, alternatives must be found. 'Outgassing rates depend on the materials and the processes used to manufacture components,' says Dubus. 'If you want a component to operate in an ultra-high vacuum, you cannot use just any kind of cutting fluid or welding technique. To be on the safe side, we require our suppliers to build and test full-scale prototypes to demonstrate that their design and manufacturing processes result in a system compatible with ITER's vacuum.' But operating in an ultra-high vacuum is not the only special consideration. 'Between plasma shots, the toroidal field magnets are still on, which means the viewing system has to work in very high magnetic fields (7 to 8 tesla), which render standard actuators inoperable,' says Dubus. 'On top of that, the environment is highly radioactive, full of neutrons and hot. Temperatures are around 70 °C during inspection and up to 120 °C during baking—high temperatures for electromechanical devices.' The system is being designed to overcome all possible hazards, because reliability and availability are essential requirements. If one unit shuts down, not only would it render a part of ITER invisible, but any equipment left behind in the chamber would also make it impossible to run another pulse. To minimize this risk, special care is being taken to enhance system reliability and ease maintenance. All components of a single viewing system will be embedded in a single cartridge so that the equipment can be retracted in one operation and transferred to the ITER Hot Cell for repair. And just in case there is still a failure, special procedures and features are being developed to recover equipment from the vacuum vessel with negligible impact on ITER operations. Validating assumptions 'The plan is to receive components for Assembly Phase II*,' says Saxena. 'When they are delivered, they will have to go through acceptance testing, and operators will have to be trained. We will have a dedicated lab on the ITER site to test and commission our components before they get installed in the machine.' The team is approaching the end of the preliminary design phase, and plans are underway to start work towards the final design review within months. Fusion for Energy has already started developing a full-scale prototype. 'We consider it a risk-mitigation strategy to build a prototype now instead of waiting for final design,' says Dubus, 'This will allow us to validate our assumptions early enough to make adjustments if necessary.' *ITER Assembly Phase II will run from June 2026 to June 2028. To read more about Europe's involvement in ITER's remote handling systems click here. For another recent report on the in-vessel viewing system click here. 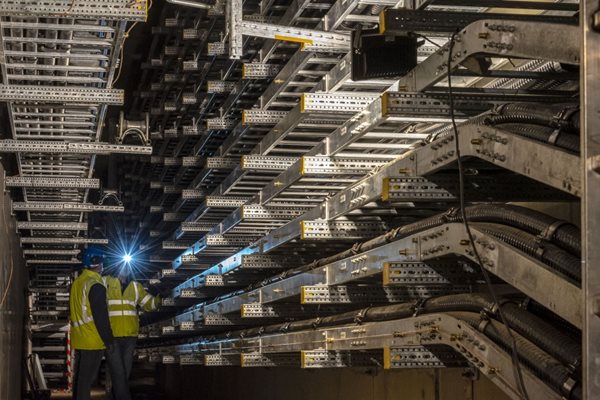 The amount of power that must be delivered to the transformers, rectifiers, converters and other exotic devices that will feed DC current to the magnets and other 'ITER specific' systems is equivalent to the production capacity of a medium-sized thermal power plant (~500 MW at peak pulse). This huge quantity of electrical power is distributed throughout the platform, from the converters that step down the grid's voltage from 440 kV to 66kV and 22 kV, to the equipment inside dedicated buildings or installations. Thousands of kilometres of armored cables, running below ground in a maze of galleries, are tasked with the delivery. As the installation of the 66 kV cables progresses between the electrical switchyard and the twin magnet power conversion buildings, we explored this strange subterranean world. The manhole is narrow and the ladder is steep. We are descending into the 'cathedral,' a high-ceilinged space approximately 8 metres tall, almost totally occupied by rack after rack of cable trays. Each tray supports up to nine cables, each one as thick as an arm. In certain places, where the cables bend towards the surface, the impression is that of tentacles belonging to a creature lurking in the depths. From the 'cathedral,' located below the west entrance of the magnet power conversion buildings, cables head in all directions, eventually reaching the four corners of the platform. Since July 2020, workers have been busy installing the 66 kV cables that connect the converters in the electrical switchyard (where the 66 kV network originates) to the equipment inside the magnet power conversion buildings. Along this 150-metre distance, work is now 60 percent complete; it will be finalized in another six to seven months. Procured by China, the cables are delivered in drums and unspooled by a powerful winch located at the opposite end of the gallery. All along the underground pathway, contractors from the Slovakian company Busbar 4F are monitoring the operation, guiding the cables along rollers and into their dedicated trays. The pulling force exerted by the winch is proportional to the length of cable already unspooled, reaching the equivalent of 50 to 60 workers at its strongest. Fifty drums, each carrying 4.7 tonnes of cable, have been unspooled so far. Each cable carries a 600 Amp current and there are two cables per phase—which makes six cables per converter. With 26 hungry converters and a few auxiliaries to feed, the 66 kV network requires 216 individual cables, 150 of which have already been installed. Once the total cable length is pulled, one end close to the equipment in the conversion buildings and the other in the electrical switchyard, it can be connected to the converters. Prior to connection, the view is striking—the hidden creature having now extended its tentacles all the way to the surface. When the required 53 kilometres of 66 kV cables are installed, similar operations will be conducted for the 22 kV network, which is shorter (41 kilometres) and comprises 'only' 114 cables of a slightly smaller diameter. See the gallery below for more information. 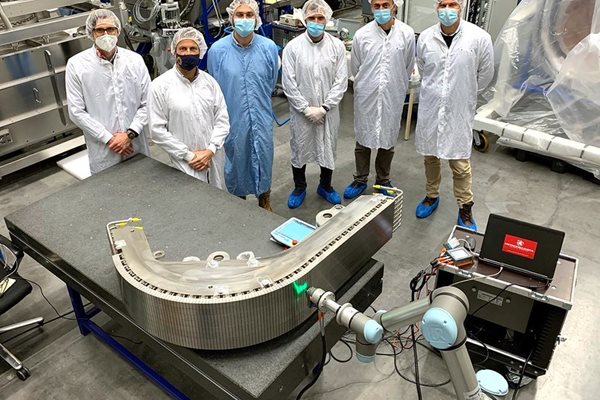 A qualification program is underway in Europe to ensure the performance and manufacturability of the divertor inner vertical target—a plasma-facing component located at the intersection of magnetic field lines at the bottom of the ITER machine where particle bombardment is particularly intense. Research Instruments (Germany) is the second European manufacturer to complete a full-scale prototype. This challenging component, one of three distinct divertor 'targets,' will sustain the highest head loads of the ITER machine—approximately 1000 °C in normal operating conditions and 2000 °C in off-normal conditions. As the high-energy plasma particles strike the tungsten surface of the inner vertical targets, their kinetic energy will be transformed into heat and the heat removed by active water-cooling. The European Domestic Agency is contracting with different suppliers for the manufacturing qualification phase of its procurement program in order to ensure competition and mitigate technical risks through the development of different technologies. Among the challenge for manufacturers is the procurement of tungsten monoblocks, the bonding of the monoblocks to the copper alloy cooling tubes, the fabrication of the steel support structure, and strict dimensional requirements. The full-scale prototype produced by Research Instruments is the second to be completed as part of the qualification program. The prototype, which measures approximately 1.5 metres and weighs 0.5 tonnes, will now be shipped to the ITER Divertor Test Facility at the Efremov Institute (Saint Petersburg) for high heat flux testing. Read the full story on the European Domestic Agency website.

Fusion? A superfast way of exploring the solar system and beyond

Harnessing fusion energy will provide humankind with a virtually unlimited, clean and safe energy source. It might also open the way to a new, superfast way of exploring the solar system and beyond. Using the power of fusion to propel rockets to velocities otherwise unattainable, and hence dramatically shortening the duration of space travel, is not a new idea: at space agencies throughout the world, nuclear fusion propulsion has been on the agenda for decades. The latest news in the field, however, does not come from a space agency but from the Princeton Plasma Physics Laboratory (PPPL), one of the major plasma research institutions worldwide. A few years ago, Fatima Ebrahimi, a principal research physicist there, began thinking about 'the similarities between a car's exhaust and the high-velocity exhaust particles created by PPPL's National Spherical Torus Experiment (NSTX).' During operation, she reflected, 'NSTX produces magnetic bubbles called plasmoids that move at around 20 kilometres per second, which seemed to me a lot like thrust.' Ebrahimi nurtured and streamlined the concept for a few years and, in December 2020, introduced it in the Journal of Plasma Physics. The title ('An Alfvenic reconnecting plasmoid thruster'*) was rather austere but the content quite mind-boggling: according to simulations, Ebrahimi's plasma thruster could eject particles at velocities of up to 1,500 kilometres per second. All of sudden, Mars and the moon of Jupiter are appearing much closer. Read a detailed article on the PPPL website. *Ebrahimi, F. (2020). An Alfvenic reconnecting plasmoid thruster. Journal of Plasma Physics, 86(6), 905860614. doi:10.1017/S0022377820001476

Testing fusion materials with a hail of neutrons

Post Brexit: A new beginning for the United Kingdom