Feeders | Multi-lane thruways into the machine 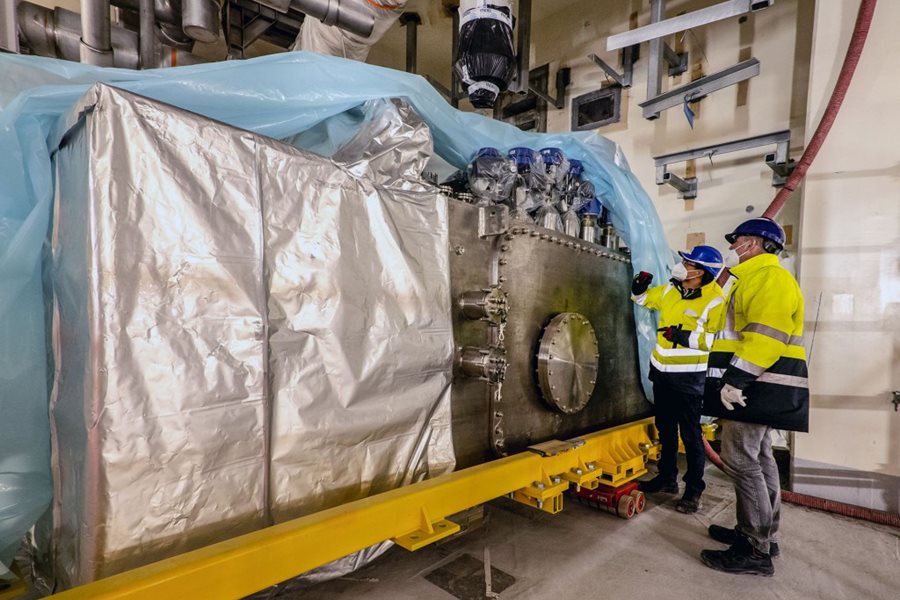 The ITER superconducting coils thrive on a simple diet of electrical power and cooling fluids. The industrial installation on site is scaled to provide both, but the challenge is in the delivery. How do you 'feed' 10,000 tonnes of magnets distributed among dozens of massive individual components in the crowded environment of the machine? The answer is: 'feeders.' From the outside, a magnet feeder looks like a large box from which a fat pipe emerges that decreases in cross section the closer it gets to the centre of the machine. Arranged in a circle at both the lower and upper levels of the ITER Tokamak, the 31 magnet feeders* are like giant syringes all aiming in the same direction. As the feeder boxes sit outside the machine in the Tokamak Building galleries—and as the pipes cross through first the bioshield and then the cryostat—one cannot, except in drawings, take in the whole expanse of the feeder system. Similarly, the outside appearance of individual feeders translates nothing of the extreme complexity inside: magnet feeders are among the most sophisticated of all ITER components and, being the lifeline of the entire ITER magnetic system, among the most strategic. Whichever coil it connects to, a feeder is made of three main segments: a coil terminal box, a cryostat feedthrough and an in-cryostat feeder. Once assembled, these segments form a system 30 to 50 metres long that extends from the galleries to the heart of the machine. The complexity inside defies description: busbars transporting current run alongside piping that distributes and recovers cryogenic fluids at different temperatures ... all carefully insulated by vacuum ducts and actively-cooled thermal shields. This multi-lane thruway into the machine also accommodates high and low-voltage instrumentation cables and hardware. Procured by China and manufactured at the Institute of Plasma Physics, Chinese Academy of Sciences (ASIPP), each feeder segment is delivered to ITER fully instrumented and, following onsite inspections and testing, ready for assembly—in all more than 1,600 tonnes of equipment and 93 large components plus auxiliaries. A little more than two years ago, in December 2018, the first magnet feeder element was installed in the assembly pit. Designed to serve poloidal field coil #4, one of the largest of the machine's ring-shaped magnets, the ''captive'' feedthrough needed to be brought into position before the completion of the cryostat base support ring. In a delicate and spectacular operation, the 8-metre-long, 4.5-metre-tall, 7.5-tonne elbow-shaped component had to be introduced into the pit through the bioshield roof and inserted into the slim opening that had been left in the crown concrete for this purpose. In December 2020, the cryostat feedthrough for the feeder serving toroidal field coils #12 and #13 was inserted into its designated position. One month later, the corresponding coil terminal box was positioned in the gallery at the lowest level (B2) of the Tokamak Building. This time, the massive component entered through a large opening in the Tritium Building and was moved along the gallery floor by means of roller skates underneath the transport frame. The three feeder segments that are now in place inside the Tokamak Building are just a fraction of the elements required for the complete system. As components are delivered from China, installation will progress clockwise, first at the lowest B2 level, which accommodates 21 feeders, later at the upper L3 level for the remaining 10. The feeder team has now established a robust installation plan and is proceeding on schedule. Next in line is the coil terminal box for PF #4, to be positioned parallel to the box recently installed, followed by the cryostat feedthrough and the valve box for one of the three feeders exclusively dedicated to cooling the coil structures. * Of the 31 feeders to be installed (21 at lower level, 10 at upper level), two are exclusively dedicated to instrumentation signals and three to the cooling of coil structures. All others carry current and coolant to magnets. 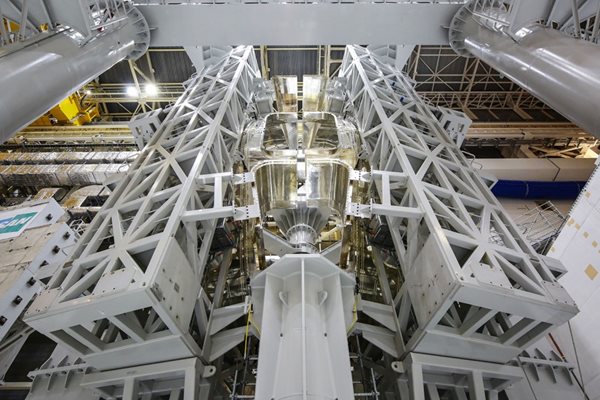 In the ITER Assembly Hall, fitting tests are underway on two outboard thermal shield panels. Once paired, the 11-metre-tall, silver-plated components will fit like a glove over the outboard surface of vacuum vessel sector #6. Procured by Korea, the vacuum vessel thermal shield fits between the vacuum vessel and magnetic system of the machine and act as a barrier against the transfer of heat to the ultra-cold superconducting coils. The outboard segments were mounted last month on the "wings" of the sector sub-assembly tool and measured; now, the wings are being rotated inwards ... the ultimate test of the fit of the two components. Hydraulic cylinders located at the base of the tools urge the rotating platforms forward in the toroidal direction in a "push and clamp" motion. As they approach the suspended vacuum vessel sector, actuators on the rotating platforms permit the components to be positioned with the highest accuracy and adjusted to six degrees of freedom (up and down, side to side, forward and backward, swivel, tilt, and pivot). Click here to view a time-lapse video of the fitting test.

Image of the week | This circle is for the ring 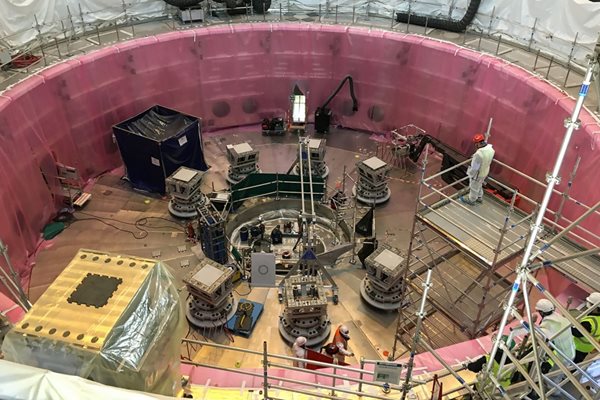 Another concentric circle has been drawn at the bottom of the machine assembly pit, formed by the temporary supports recently installed for poloidal field coil #6. Of six ring-shaped coils, poloidal field coil #6 (PF6) is the heaviest (400 tonnes). It is also the second smallest, with a diameter of 10 metres.  In April, it will be lifted in the Assembly Hall by the overhead crane, and transported to the Tokamak pit to be installed on nine temporary support structures. These temporary supports, weighing approximately 5 tonnes and containing vertical actuators, will be used until completion of vacuum vessel assembly in the pit; then, PF6 will be raised to its final position using hydraulic jacks and aligned. Inside of the circle formed by the temporary supports, the assembly teams will be installing a first, spare set of pre-compression rings and the central column of the in-pit assembly tool. 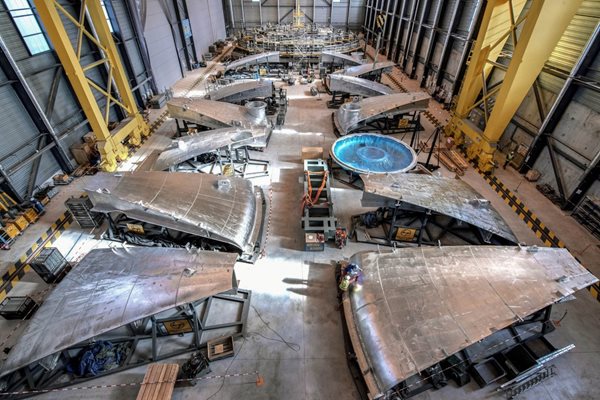 In this vast workshop over the past five years, the different sections of the ITER cryostat have been assembled and welded under India's responsibility. The base section, followed by the lower and upper cylinders, have successively taken shape—massive components whose dimensions give a true sense of the awesome size of the machine they will enclose. The time has now come for the last of the four sections to enter the stage. At 665 tonnes, the cryostat top lid is the second heaviest component of the ITER machine. Its main elements—12 lid segments, one centre cylinder and one centre cover—have all been delivered and will soon be positioned inside the supporting frame. Once the segments are assembled and adjusted, and the fit-up verified, welding operations will start, followed by the machining of the flange and the drilling of 144 holes for the bolting system. Indian contractor Larsen & Toubro (manufacturing design, fabrication and assembly) and sub-contractor MAN Energy Solutions (welding) are responsible for the work. By year end, the fourth and last element of the cryostat will have been finalized. A major milestone in the ITER Project and the end of a magnificent human and technological adventure. 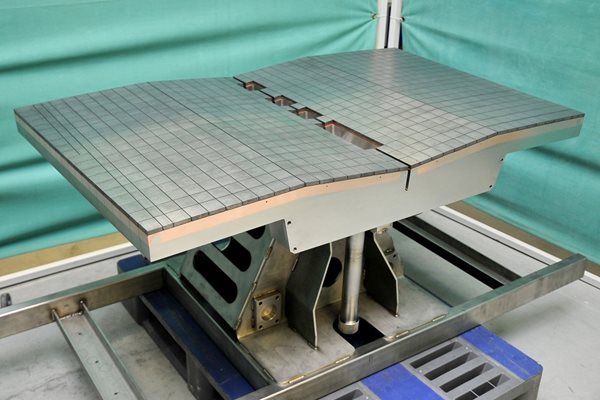 For one of the most demanding technological components of the ITER machine—the first wall of the blanket—the European Domestic Agency Fusion for Energy made the decision early on to involve different suppliers in a multiyear manufacturing qualification effort that concluded with the realization of full-scale prototypes. The effort has paid off, as two consortia have now been awarded production contracts. Completely covering the interior surfaces of the ITER vacuum vessel is the 'blanket'—a protective component designed to protect the rest of the reactor by absorbing most of the radiative and particle heat fluxes from the hot plasma, as well as by stopping or slowing down most of the neutrons that result from the fusion reactions. The blanket is a modular component consisting of a shield block (for neutron shielding) and a plasma-facing, detachable first wall panel in the front that directly faces the plasma and removes the plasma heat load. Each of first wall panels measures 1 x 1.5 metres (height x length), and is coated with a 6- to 10-millimetre layer of beryllium armour tiles bonded to a copper alloy heat sink mounted on a stainless steel structure. Of 440 panels required, approximately half are under the procurement responsibility of the European Domestic Agency, Fusion for Energy: 215 normal heat flux first wall panels designed for heat fluxes of up to 2 MW/m². (China and Russia are sharing the procurement of 225 enhanced heat flux panels designed for 4.7 MW/m².) Fusion for Energy has signed contracts with two consortia—Atmostat-Alsyom, and Fusion Business Leadership (a legal entity made of the Spanish firms Leading and Empresarios Agrupados)—for the production of the first series of panels.  Each group will have to set up and qualify its production line, and produce 27 panels plus 3 as part of the pre-series. The production of the rest of the panels to be provided by Europe will materialize through additional contracts that will be awarded from 2024 onwards following a reopening of competition between both consortia. Stefano Banetta, first wall project manager at Fusion for Energy, has been following the progress of first wall development for the last ten years. 'The signature of [these contracts] marks the end of a long period of R&D, during which we collectively refined the manufacturing processes and developed the necessary skills. We are now ready, and very excited, to start manufacturing the real components that will be part of the ITER device.' Read the full report on the Fusion for Energy website.

Virtual tour | Fly over and peek inside 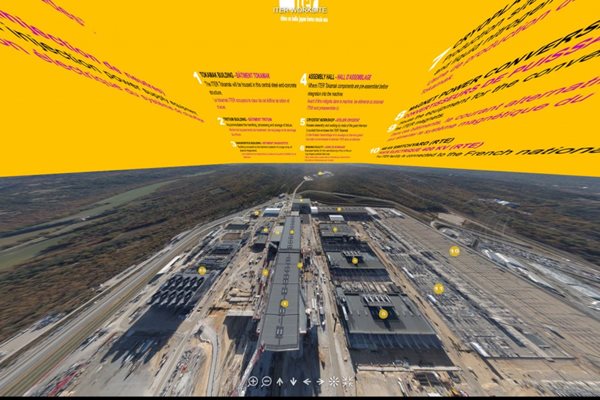 A new tool takes us on a tour of the ITER worksite from the air, identifying the many buildings and technical areas that make up the scientific installation.  The 42-hectare ITER platform is filling up—fully three-quarters of the required buildings and infrastructure for First Plasma is in place and only three major projects still have to be realized: the ITER Control Buildings, the Hot Cell Facility, and the buildings housing the power supply for neutral beam injection. But don't take our word for it. Try out this new panoramic tool that allows you to identify the buildings of the ITER scientific facility from the sky. Clicking on most numbers will bring you briefly inside the building for a view of equipment, or show you what the not-yet-realized buildings will look like. Click here and take the tour.

Because the mechanical and thermal properties of materials can change substantially under neutron irradiation, one of the major challenges for the demonstration of fusion electricity is to develop neutron-resistant materials. As part of the EUROfusion Roadmap to the Realisation of Fusion Energy (here), the Belgian nuclear research lab SCK CEN tested ITER baseline structural materials like tungsten, copper and steel during a lengthy regimen of high heat and intense neutron radiation flux. Inside SCK CEN's fission research reactor BR2, the material samples spent two years facing a temperature of up to 1200 degrees Celsius in a hail of neutrons from uranium fission. SCK CEN will now partner with other European research labs to investigate how the high speed neutrons have impacted the thermo-mechanical properties of the irradiated samples. Read the full report on the EUROfusion website. --Image: A basic plasma-facing unit consisting of a tungsten block and a copper cooling water pipe. Source: SCK CEN

A step closer to completing the MITICA cryopump

Putting the sun in a bottle: the path to delivering sustainable fusion power (lecture)