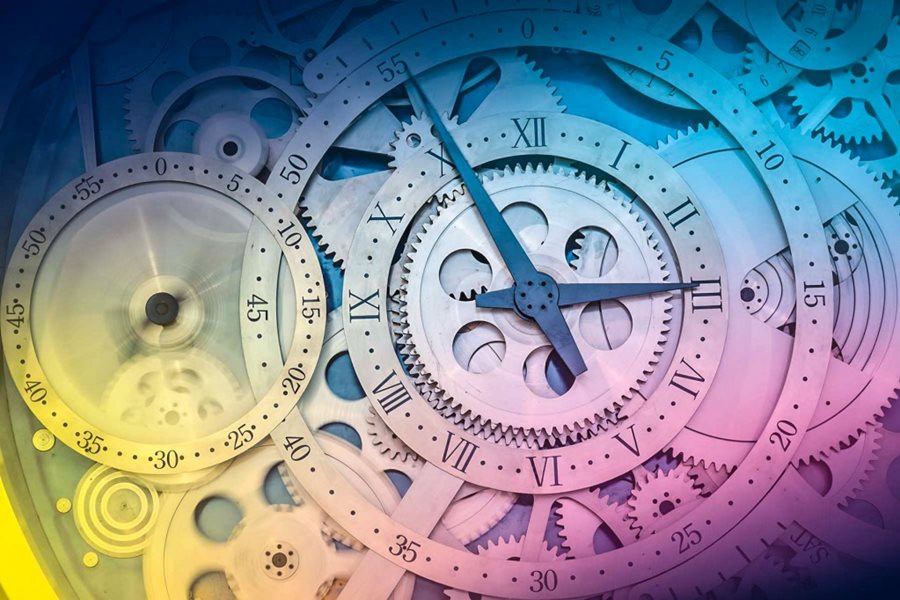 ITER will rely on hundreds of computers, ranging from diagnostics and actuators to servers running physics models or providing a human interface to operators in the control room. All of these computers will need to be connected—and they must all agree on the time. Clocks on the ITER network need to be synchronized to within 20 nanoseconds for at least three key reasons. First, measurements coming from different diagnostic and instrumentation sensors have to be correlated for analysis. While data is time stamped on acquisition, if the clocks do not agree the data from an entire experiment could be of no value. Second, control systems need to issue commands to be carried out by multiple actuators in lock step. For example, corrections to the plasma shape or position inside the vessel require several magnets to take actions in a synchronized manner. Finally, ITER needs a general platform for real time distributed processing. Several plant systems require multiple processes that start and finish at predicable times—and this can only work if all systems run off the same clock. Ensuring conformance of computing equipment from different suppliers 'One of our challenges is that different suppliers from around the world provide pieces of computing equipment,' says Bertrand Bauvir, leader of the Central Control Integration Section. 'To make it easier for all systems to interoperate, we use an international standard for time synchronization—the IEEE 1588 standard, which is also called precision time protocol (PTP).' PTP operates along similar principles as White Rabbit, an extremely precise synchronization technology that was developed at CERN around the same time. But while the CERN technology requires specialized networking equipment, the 20-nanosecond accuracy needed by ITER can be achieved with commercial-off-the-shelf network components procured from industry leaders. ITER can rest assured that PTP does the job. The standard was first published in 2002 and has since undergone two major revisions. For over a decade, PTP has enabled a variety of applications where time is of the essence, including two that modern societies could never do without: financial trading systems and mobile phone towers. The protocol works by having a master clock send the time to all other computers. The other systems set their clocks using that time and add the transmission delay—the time it takes for a message to get from the master to the recipient. To compute the delay, messages are sent back and forth and the sending and receiving times compared. To overcome the fact that workloads fluctuate, network switches detect PTP traffic and provide information on transit latency. Even though PTP is a solid protocol, no time synchronization system works unless all suppliers adhere to the standard. To make sure of this, Bauvir and colleagues test every new piece of equipment before it is connected to the ITER network. 'We validate not only that each component operates, but also that it reaches its specified performance,' says Bauvir. 'Our work doesn't stop there. Once the network is running, we will continuously monitor every piece of equipment—collecting performance data, health data and configuration changes. We will continuously update a map of our time synchronization system to be able to detect at any moment if something is abnormal.' 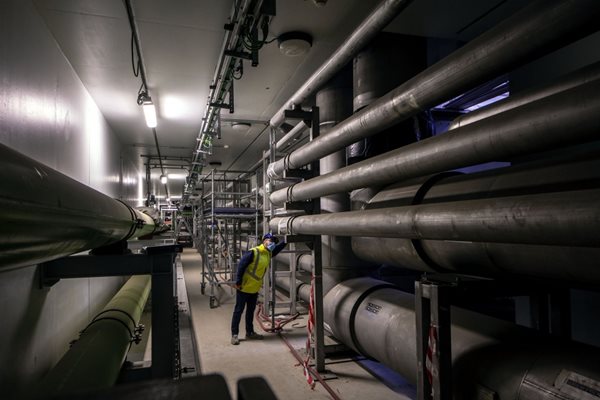 Originating in the cryoplant, kilometres of sophisticated cryolines deliver cooling fluids to some essential elements of the ITER machine—the superconducting magnets, the cryopumps and the different parts of the thermal shield. The cryoline network is built out of individual spools that measure up to 10 metres in length and range from 25 to 1000 millimetres in diameter. A section of cryoline can host up to six or seven "process pipes," each devoted to a specific fluid, flow direction or function. The Indian Domestic Agency, responsible for 100 percent of cryoline procurement, is working with two companies—France's Air Liquide and India's INOXCVA. The Indian firm is providing the totality of the piping inside the cryoplant. One of the first and most obvious requirements for the cryoline network is to be perfectly leak tight. After more than a full year of work, an important milestone was passed last week as all 4.8 kilometres of cryolines and 'warm lines' inside the cryoplant were successfully leak tested by the INOXCVA team operating under the responsibility of ITER India. The network inside the cryoplant comprises close to 1,000 spools connected by an equal number of welds. About half the welds were randomly helium-tested prior to the final pressure test at 30 bars, which demonstrated the leak tightness of the entire network. 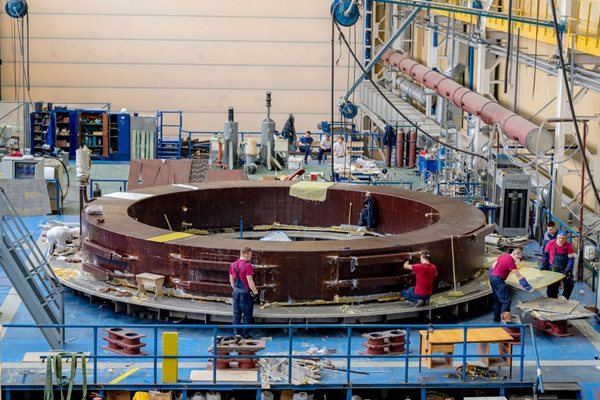 ITER's smallest poloidal field magnet—PF1—has successfully completed one of the final stages of production, resin impregnation, at the Sredne-Nevsky Shipyard in Saint Petersburg. Experts from the Efremov Institute (JSC NIIEFA, ROSATOM) and the Sredne-Nevsky Shipyard have successfully completed the vacuum pressure impregnation process on the coil winding pack of PF1. Acting inside of a vacuum mould and under the effect of heat, epoxy resin hardens the coil winding pack into a rigid assembly and ensures its electrical insulation. This crucial manufacturing milestone comes after a number of technological milestones were achieved last year. Poloidal field coil #1 (PF1) is one of six poloidal field coils designed for plasma confinement in the ITER machine. Nine metres in diameter, 200 tonnes, the magnet is a complex system whose building blocks—eight double pancakes wound from niobium-titanium cable-in-conduit conductor—have been stacked and joined electrically. Just over 6 kilometres of superconductor were used during winding of PF1; this material was supplied by Russian enterprises JSC 'TVEL', JSC 'CHMZ', JSC 'VNIINM', and JSC 'VNIIKP.' Due to the first-of-a kind nature of the component and the extremely high performance and quality requirements imposed by the ITER Organization, the manufacture of PF1 required the development of advanced technologies and technological processes. The most important technologies, as well as the equipment for manufacturing, were developed at the Efremov Institute of Electrophysical Apparatus. According to Anatoly Krasilnikov, head of the Russian Domestic Agency, it is difficult to overestimate the importance of achieving this critical stage of fabrication. 'The main difficulty of impregnation was the irreversibility of the operation; it would have been impossible to alter anything in case of failure. But we had no doubts that we would succeed because a truly high-class team is working on the manufacture of the coil.' Vacuum pressure impregnation confers extremely high dielectric and mechanical strength to superconducting coils. Following its successful conclusion, PF1 will go through a number of further technological operations such as the addition of clamps, protective covers and pipes. The finished product will undergo factory acceptance tests before shipment to the ITER site in 2022. 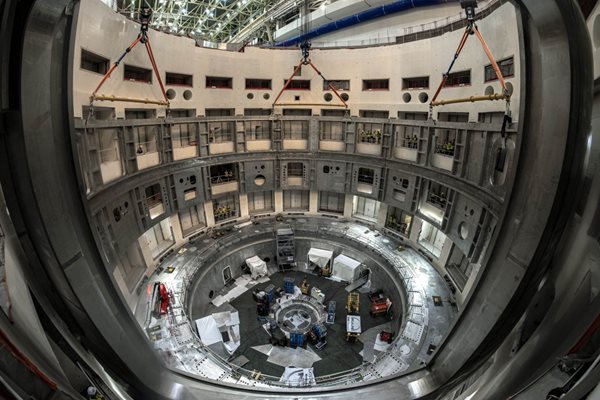 On 26-27 May 2020, as the 1,250-tonne cryostat base was installed at the bottom of the assembly pit, a new and decisive chapter opened in the history of ITER. This time-lapse video, shot from a camera positioned almost directly above the assembly pit, will take you from early May 2020, when the pit was still an empty space ringed by the cryostat support bearings, to mid-March 2021 as ITER prepares for the insertion of the first poloidal field coils in the coming weeks. This ten-month span condensed into 1 minute and 28 seconds illustrates the variety of actions required as well as the tools and the techniques involved (note the flashes of light from the welding operations at the centre of the pit from February into March 2021) in the positioning of the cryostat lower cylinder, the lower cryostat thermal shield, the temporary supports for poloidal field coil #6 and the gravity supports for the toroidal field coils. Click here to watch the video.

High-resolution encoders to view inside ITER's vacuum vessel in production