Central solenoid | 1st delivery celebrated on both sides of the Atlantic 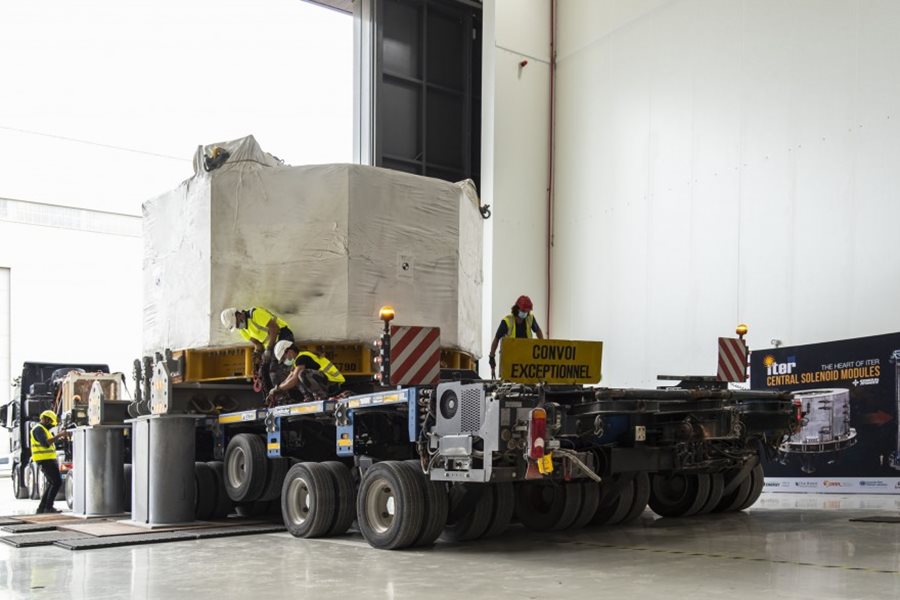 Standing 18 metres tall at the very heart of the ITER Tokamak, the central solenoid will generate an intense magnetic field which, in turn, will induce an electrical current inside the plasma and initiate the heating process that will ultimately allow fusion reactions to happen. The figures are mind-boggling: once assembled, the six modules that form the central solenoid will weigh approximately 1,000 tonnes, deliver a magnetic field of 13 tesla, and induce a plasma current of 15 million amperes. In lay terms, it means that the ITER central solenoid could lift an aircraft carrier out of the water and that its support structures are dimensioned to withstand forces equivalent to twice the thrust of a space shuttle at lift-off. The central solenoid is the most emblematic of all the contributions óf the United States to the ITER Project. Fabrication of the modules began nearly ten years ago at a General Atomics facility created expressly for the purpose—the Magnet Technologies Center close to San Diego, California. The first of the completed modules left the factory on 21 June this year, travelled more than 2,400 kilometres by road to the port of Houston, Texas, and then crossed the Atlantic, reaching southern France on 27 July. Last week, in the early hours of Thursday 9 September, the 110-tonne component passed the gates of the ITER construction site where it will be placed in storage to wait for its siblings. A second module took to the sea earlier this month and is expected at ITER in November. The arrival on site of the first element of the 'most powerful magnet in the world' drew considerable media attention: newspapers, magazines, TV networks, and documentary producers covered the component's journey along the ITER Itinerary and its subsequent move into storage. By late afternoon, with the module safely in stillage, a small ceremony was organized with the virtual presence of representatives from US ITER, General Atomics and the US Department of Energy. Tim Luce, ITER Head of Science & Operation since 2017 and a former senior scientist at General Atomics, reminisced about the formidable industrial endeavour of building this first-of-a-kind component. Standing in front of the module, he said: 'We have retired the risk of 'Can it be done?' The component is right here to prove that. But what you can't see are the late nights, the weekends, the anxiety during the testing phases that went into the making of this magnet.' Speaking from Washington, James Van Dam, the head of Fusion Energy Sciences at the US Department of Energy, praised the 'great job' from General Atomics and the 'close working relationship' between US ITER, the Japanese Domestic Agency (which provided the 43 kilometres of niobium-tin conductor required for the central solenoid) and the ITER Organization. 'ITER," he said, "represents world-changing science. It will indeed transform the world.' From Oak Ridge, Tennessee, US ITER Director Kathy McCarthy stressed the value of the experience gained by this endeavour. "It not only supports the achievement of the ITER mission, but will also inform future fusion and high-power magnet endeavours. Building 'the heart of ITER' yields hands-on experience and insight for precise fusion engineering and manufacturing.' From half a world away, in California, the Director of Engineering and Projects for General Atomics, John Smith, stressed that the manufacturing of the central solenoid "ranks among the largest, most complex and demanding magnet programs ever undertaken. I speak for the entire team when I say this is the most important and significant project of our careers. We have all felt the responsibility of working on a job that has the potential to change the world.' The effort, however, does not end here. 'Now, we turn to 'Can we get the other modules in time?' and 'Can we assemble them properly?'' Tim Luce concluded. The challenge will keep the teams busy for close to two and a half years. Click here to view a video of the last leg of the module's journey. Click here for a press release and a video of the US celebration on the General Atomics website. 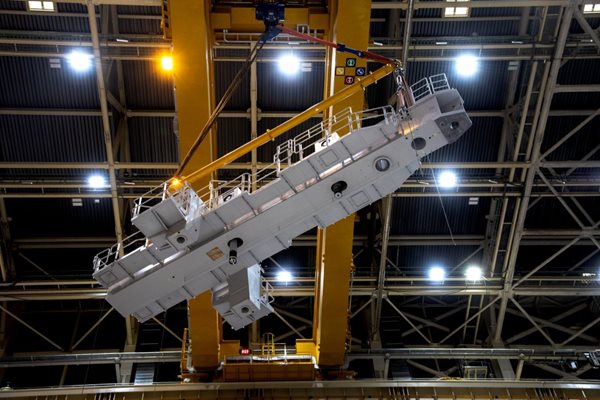 When describing operations inside the ITER in the assembly theatre, one is invariably tempted to call up images from the realm of science fiction. How else to convey the awe and puzzlement that every component and every operation trigger? The installation of a test radial beam, on Wednesday 8 September, was one of those moments when it felt like being witness to something utterly alien. A radial beam is not, in itself, a spectacular component: 14 metres long and weighing approximately 70 tonnes, it is part of the massive in-pit assembly tool that will rise at the centre of the Tokamak pit for the duration of vacuum vessel assembly. However once hanging in the air and slowly moving along the entire length of the assembly theatre, its shape and pace were strongly evocative of slim spaceship—the bow turned toward its destination, an upper deck gangway, and openings in its hull like rocket exhausts. And when the spaceship docked on top of the recently installed central column, it was as if a long journey through space had come to an end. One almost expected alien creatures to come out of the ship ... The team managed to have everything prepared in order to complete the trial lift before the installation, scheduled this week, of poloidal field coil #5 (PF5). 'There was quite a lot to do in a short period of time,' explains Colin Smith, the engineer responsible for the installation of the in-pit sector assembly tooling. Having verified with metrology that the central column and radial beam support were properly aligned, operators were reassured. 'Considering the length of the beam, an offset of just a few millimetres on the central column would have resulted in centimetres of misalignment on the support.' The docking and fitting of the beam, and the final bolting to the top of the column, all fell within the required millimetre tolerances. Final measurements did reveal an unexpected 'slope' in the radial beam itself. 'Because we did this test early, we have ample time to investigate whether this slope is acceptable or if we need to perform shimming to compensate for it prior to the installation of the first sub-assembly.' 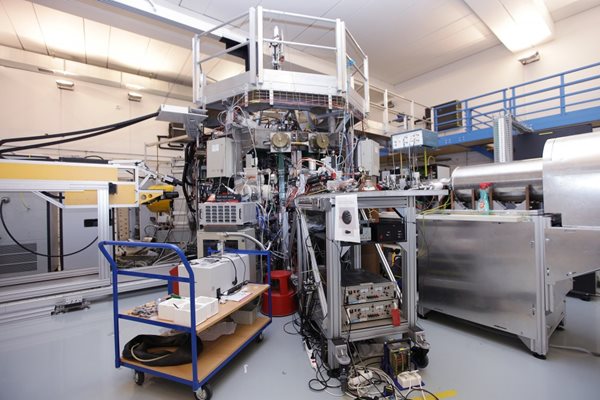 After 12 years of operation and 21,000 plasma shots, the Czech tokamak COMPASS ceased operation on 20 August 2021. The tokamak will now be disassembled to make room for COMPASS-U ('Upgrade')—a high magnetic field device with an enlarged operational space and broader flexibility. Designed and constructed with the participation of European and international partners, COMPASS-U will support ITER operation and address some of the key challenges for the design and construction of a next-phase reactor, DEMO. Over its long and valuable lifetime, COMPASS trained generations of students in ITER-relevant plasma physics studies. Originally operated at the Culham Science Centre in the United Kingdom (1992-2002), it was offered by the European Commission and the UK Atomic Energy Agency to the Institute of Plasma Physics, Czech Academy of Sciences in 2004. During installation and commissioning (2006-2011) COMPASS was enriched with enhanced diagnostics, new control and data acquisition systems, and completely new power supplies. In 2012 scientists achieved H-mode on the COMPASS device, making it one of only four devices in Europe capable of operating in high confinement mode (with ASDEX-U, JET and TCV). Further enhancement of the neutral beam auxiliary heating system enabled the team at the Institute of Plasma Physics to carry out plasma physics studies in ITER-like regimes. 'Twelve years of successful operation and exploitation of the COMPASS tokamak at the Institute of Plasma Physics in Prague has been instrumental in obtaining national funding for the construction of a new facility—the COMPASS-U tokamak,' says Director Radomír Pánek. COMPASS-U will be an entirely new tokamak, built in the same torus hall as the original machine. It is designed to occupy a unique space among existing tokamak research facilities—operating at high magnetic field and high plasma density. Its unique characteristics will enable the exploration of advanced confinement modes and plasma configurations, and the testing of new plasma-facing materials and liquid metal divertor concepts. COMPASS-U will be the only medium-sized tokamak in the world capable of confining the plasma using magnetic fields up to 5 T and generating conditions similar to ITER and DEMO (plasma geometry, high power fluxes in the divertor region, high density...). It will be also able to operate with the first wall at the temperature of 500 °C, allowing scientists to make significant contributions to the design and operation of future fusion power plants. In particular, the device will be used by Czech and international colleagues to address some of the gaps in heat exhaust physics, one of the key challenges identified in the EUROfusion Roadmap to the Realisation of Fusion Energy. 'The design and construction of such a high-magnetic-field tokamak, capable of operation with liquid metal technology, brings a lot of challenges,' explains Pánek. 'Nevertheless, the team has already successfully passed the final design review of tokamak assembly and some of the auxiliary systems, for example the new the power supply system and the first 1MW neutral beam injection module have been already manufactured.' It will take the team approximately two months to disassemble COMPASS. A significant modification of the experimental hall must get underway soon in order to be ready for the assembly of COMPASS-U. The start of operation is planned in 2024. Resources: COMPASS final plasma shot (20 August 2021) COMPASS-U animation More on the Czech Institute of Plasma Physics

The ITER Talks series was introduced over the summer as a new outlet to educate viewers on the ITER Organization and fusion science. The first video, available for viewing here, was hosted by Laban Coblentz, head of Communications, and served as a general introduction to ITER. The second instalment, just released, delves into one of the major machine components: the blanket. René Raffray, ITER's Blanket Section leader, presents the many functions of the blanket system and the process of its construction. René also recounts the history of blanket design, as it adapted to new knowledge uncovered over the years. The current design is complex, with many smaller pieces that must come together before the blanket is ready to be installed. Once the blanket is complete, it will act as a shield to protect the vacuum vessel from the energy produced by the fusion reaction. Watch the second episode of the ITER Talks here.

Fusion breakthrough dawns a new era for US energy and industry

What will the most powerful magnet in the world that arrives in France be used for? — France

The COMPASS tokamak ends: the new era of fusion research begins in the Czech Republic

Is The World Investing Enough In Nuclear Fusion Research?