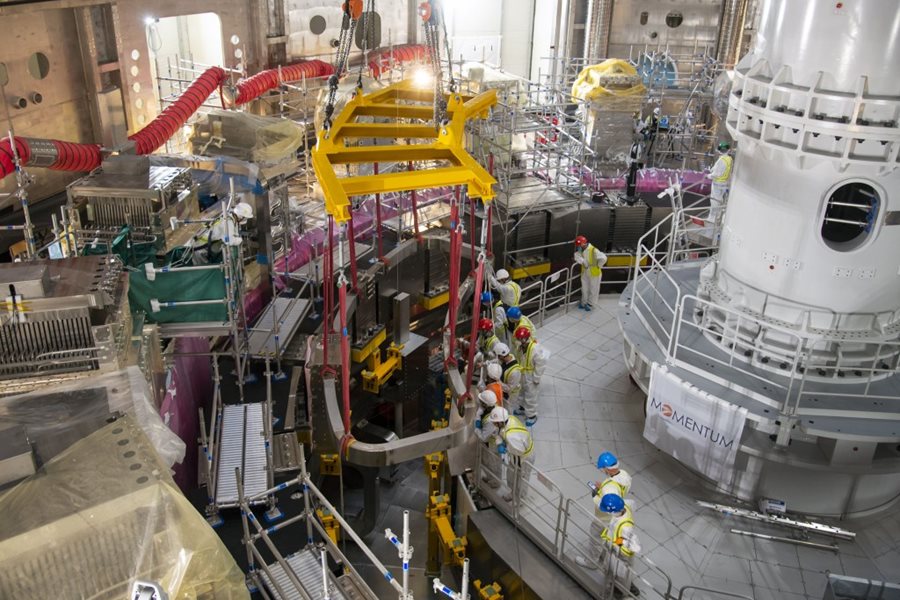 In all tokamak devices, ITER included, small deviations in the shape or position of the magnets cause unwanted field perturbations that can affect plasma stability and confinement. Correcting these 'magnetic field errors' in ITER is the job of the correction coils—18 small superconducting coils inserted between the major toroidal and poloidal field systems. The first correction coil was lowered into place on 21 October. Despite extreme precision in the manufacturing and assembly of the ITER magnet system, the smallest deviation from nominal in the magnets themselves—or in the system's joints, current leads or electrical busbars—perturbs the magnetic trap that confines and shapes the plasma. Eighteen correction coils—six top, six side and six bottom—will act in pairs to correct, or reduce, the most troublesome field errors. Based on a build-to-print design developed by the ITER Organization, the Chinese Domestic Agency and its contractor ASIPP (Institute of Plasma Physics, Chinese Academy of Sciences) are procuring the coils. The first two bottom correction coils arrived on site at ITER in December 2020; since then, four other bottom coils have been delivered. On site, each coil undergoes site acceptance tests including electrical tests, dimensional surveys, leak tests and weld inspections. For bottom coils BCC/4 and BCC/5, these tests were completed this month. In parallel to the acceptance tests, the team has to prepare the very tight environment of the Tokamak pit for the installation of the each coil. 'We know the as-built position of the first two poloidal field coils in the pit; we needed to work back from that to ready the temporary supports and plan the lift,' says Josep Pallisa, assembly engineer in the Magnet Section. 'In the crowded environment of the lower Tokamak pit, the bottom correction coils and their supports have only a small sliver of space between poloidal field coil #6, poloidal field coil #5, lower magnet feeders, and staging platforms.' The lift of BCC/4 on Thursday 21 October went according to plan. The second correction coil, BCC/5, will be positioned in the pit on 26 October, followed in the coming months by two other bottom correction coil pairs. In the final machine geometry, the correction coils will be attached to the toroidal field coil superstructure. 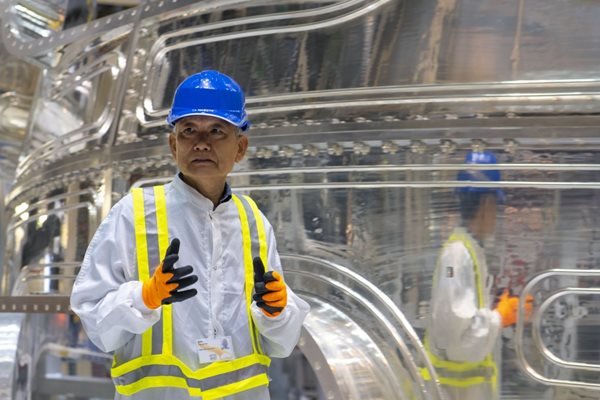 What Youngeek Jung remembers distinctly about his childhood and teenage years is being hungry and cold. South Korea, where he was born in 1956, was in ruins. 'We had nothing. Winters were harsh, with all rivers and lakes deeply frozen.' Korea's recovery from one of the most horrific wars of the 20th century (1950-1953) is a story of resilience, determination and almost inhuman effort. 'We had absolutely no other resource than the raw force of the working people.' Like many in his generation, Youngeek, who was recently appointed head of the ITER Construction Domain, was determined to 'study hard and become excellent' in order to contribute to what amounted to his country's resurrection. Six decades later, both Youngeek and Korea have come a long way from the hardship and misery of the post-war years. (The country now ranks 10th worldwide in terms of gross domestic product.) True to his teenage commitment to hard work and excellence, Youngeek, a chemical engineer by training, rose through the ranks of the nuclear giant KEPCO and largely contributed to building Korea's nuclear infrastructure. 'Nuclear energy appealed to us young people. And as Korea doesn't have much in terms of natural resources, we knew it would be key for the country's development.' The early Korean nuclear plants were 'turn-key projects' first provided by the United States, then by France. In 1984, two years after graduating from Kyungpook National University, Youngeek was sent to train at EDF, the French public utility—his first contact with the outside world and 'a big cultural shock,' with everyone owning cars and taking regular holidays. 'France appeared to me to be a land of plenty.' From then on, postings in France punctuated his career. He was back in 1988 as a contract manager at the liaison office KEPCO had established in Paris, and again in 1997 when the Korean government sent him to the Paris-based Organisation for Economic Co-operation and Development (OECD), which the country had just joined. In parallel, at KEPCO, Youngeek kept rising through the ranks. In the mid-2000s he was one of the top managers, with responsibility for construction, quality insurance and export. One of his crowning achievements was the landmark sale of four Korean-design nuclear reactors to the United Arab Emirates in 2009, for which he was awarded the Medal of the Government, one of Korea's highest distinctions. Five years ago, Youngeek retired from his final position as head of the Kori nuclear complex, the world's largest nuclear site with six operational reactors, four under construction and close to 10,000 employees. Being retired was the first challenge that he did not feel quite up to. 'I didn't have much to do. I played golf three times a week, started building a small vacation house, travelled... and a few years passed.' Consulting for the Korean Energy Economic Institute was a welcome diversion. 'It was a full-time job, one that put me in contact with the younger generation of economists, and I was very happy.' One day, one of his young colleagues mentioned 'the big reactor being built in southern France' that had a job opening for an experienced construction manager. 'From that day on I explored the ITER website, read everything, and took the full measure of what was at stake with this project,' says Youngeek. 'And I thought: this is something worth devoting my knowledge and experience to ...' Youngeek is aware that building ITER is not quite the same as building a power plant in Korea. 'Back home, all those involved shared the same culture and background. This is obviously not the case here. Also, a research installation is different from an industrial project. But the main purpose is to complete construction successfully. And this, I've been doing all my professional life...' At age 65, Youngeek Jung remains true to his childhood commitment to hard work and excellence. He sees his contribution to ITER as his 'final service to the energy future of humankind,' and he feels that his 'mind and actions are returning to his young age.'

Central solenoid module | Tests and verifications prior to assembly 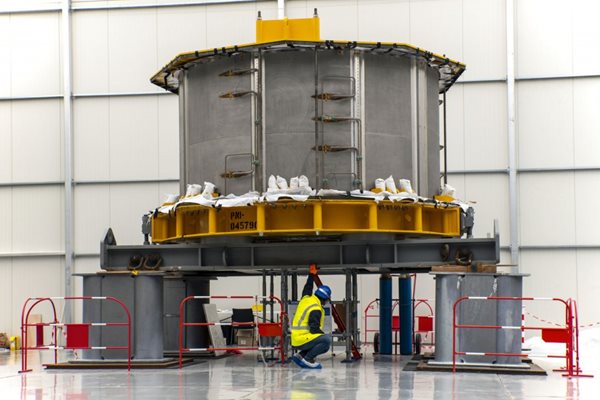 In January next year, the 'most powerful magnet in the world' will begin taking shape. The first module of the Tokamak's central solenoid will be positioned on a bespoke platform and the assembly process will begin in the ITER Assembly Hall. One by one, the six modules that make up the 18-metre tall, 1,000-tonne component will be stacked one upon the other and held together by a sets of tie plates (18 exterior and 9 interior). At both ends, the tie plates will be locked to 'key blocks' weighing up to 6 tonnes each. Removable hydraulic jacks inside the key blocks will exert huge pressure (210 meganewtons¹) on the module stack and keep them in mechanical compression. This huge load is indispensable in order for the central solenoid to withstand the mechanical and magnetic forces it will be submitted to. These forces are equivalent to twice the thrust of a space shuttle... Two central solenoid modules have already been delivered to ITER. The first one is presently undergoing a battery of tests and verifications—metrology, sensors and electrical insulation inspection, etc. The remaining five modules (including one spare) are in the final stages of fabrication at General Atomics in California. All are expected to be delivered by mid-2023. ¹A meganewton (MN) is a unit of force corresponding to the force required to accelerate a mass of one million kilograms by one metre per second.

The ITER Organization is organizing a virtual Open Doors Day on Wednesday, 27 October 2021. The three-hour event will be offered in English (afternoon) and French (morning). 'Visitors' who sign up through an on-line portal will have a chance to attend a general presentation on the ITER Project, take self-guided virtual visits through the main buildings on site, and browse through a virtual exhibition centre featuring some of ITER's manufacturing and construction partners. A number of surprises are also planned ... think virtual reality, DIY, livestreams and we've even heard a rumour about a 'plasmagician,' but we have no more information at this time ...  (Age recommendation: 7 and up). More than 1,000 people have signed up. Will you join them? Follow the links to sign up in English or French.

Call for the SOFT Innovation Prize

The Marathon Race Toward Fusion Power Could Be Reaching a Sprint

Nuclear Fusion Edges Toward the Mainstream