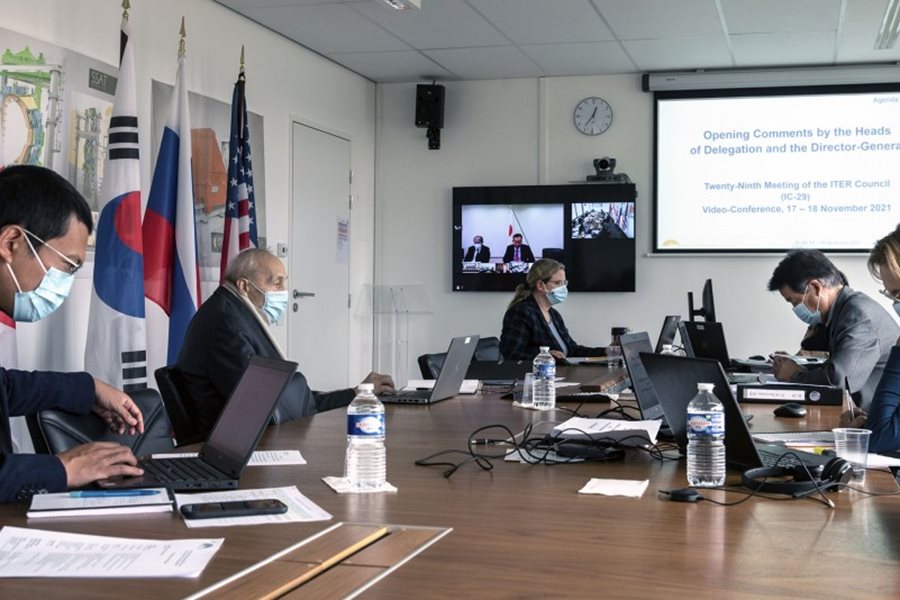 The ITER Council convened for its Twenty-Ninth Meeting on 17 and 18 November 2021—the fourth consecutive meeting held virtually due to the global pandemic. On the agenda was a thorough review of progress reports and performance metrics, commitments, and achieved and upcoming milestones.   The two-day, online meeting was the 29th session since the first ITER Council convened in November 2007, just one month after the formal establishment of the ITER Organization. Under the chairmanship of LUO Delong, from China, representatives of the ITER Members reviewed the progress of construction, manufacturing, and assembly, including the impact of the COVID-19 pandemic on project execution. "The project has continued to progress, with respect to both Members' best efforts for delivery of components and worksite installation and assembly activities," reads the press release issued at the close of the meeting. "The effects of technical challenges and the ongoing pandemic are being closely monitored, with constant attention to mitigation measures to uphold project progress." The ITER Organization has now accumulated significant experience in the assembly and installation of the components received from ITER Members. Five major components have been installed in the Tokamak pit (cryostat base, cryostat lower cylinder, lower cryostat thermal shield, poloidal field coil #6, and poloidal field coil #5), and the next large lift—the first vacuum vessel sector sub-assembly—is imminent. Major progress has been achieved on the installation of plant support systems. A second vacuum vessel sector has been received on site and will soon be lifted into assembly tooling. The ITER Organization has also received the first two central solenoid modules and eight toroidal field coils (with four more travelling). The ITER Council has asked the ITER Organization to prepare a baseline update for consideration at its next meeting in June 2022 and to take all possible measures to ensure the start of fusion power operation in 2035 as currently planned. The Twenty-Ninth ITER Council was the last meeting for Chair LUO Delong, from China, who reaches the end of his two-year term on 31 December. The Council elected Massimo Garribba, from Europe, as the next Chair of the ITER Council and Viktor Ilgisonis, from Russia, as the next Vice-Chair. Read the full press release in English or French. 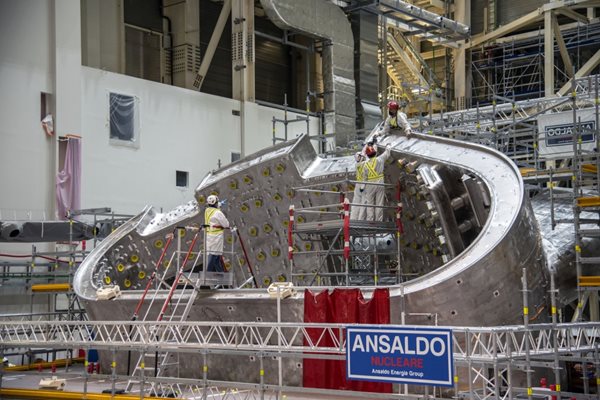 In life as in the assembly of the ITER machine, 'lessons learned' are what makes progress possible. Gains in wisdom, time, skill, investment can be incremental; they can also be spectacular. The ongoing preparation works on the second vacuum vessel sector, Sector #1(7), offer a striking example of the benefits that come with experience: whereas it took 36 work weeks to fit the first sector with sensors, cables and flux loops, it is expected that the same operations on the second sector will only require 15 to 17 work weeks—less than half the time. Although the packaging of both sectors for shipment from Korea was similar, the duration of the unpacking operations was divided by two the second time around. 'We knew from experience where to expect difficulties and we were able to anticipate and adapt,' says Alex Martin, the head of the ITER Vacuum Vessel Section. Once extracted from its transportation frame, cabin-sized metal box and multi-layered wrapping, the first vacuum vessel sector, Sector #6, had been subjected to a helium leak test. No leaks above the limit of detection were found and the values obtained were two orders of magnitude tighter than the acceptance criteria. 'We had full demonstration of the quality control procedures performed by the manufacturer, Hyundai Heavy Industries, and ITER Korea. So we decided that, as far as Sector #1(7) was concerned, we would do without the on-site leak test,' says Martin. And thus the teams saved another week. With fewer bosses but more clips to install, the amount of work to equip the second sector is equivalent to the first. But this time, the organization is different. 'We've gone from a sequential to a parallel approach. Sector #6 kept us busy for approximately four months on this task; this time, with the optimization of the processes, we expect to complete the works in two months.' As equipment work on Sector #1(7) is nearing completion, preparation for moving the component into the upending tool and then into the sector sub-assembly tool (SSAT-1), has already started. 'If we compare with the first vacuum vessel sector, we are now ten weeks ahead overall and we are already working on the lift operation, preparing for the installation of the radial beam and the sector lifting tool.' During the sub-assembly operation, Sector #1(7) will be joined with toroidal field coils #8 (TF8 from Japan) and #9 (TF9 from Europe). This second sub-assembly—which will certainly also benefit from lessons learned on the first operation—is scheduled to be lowered into the Tokamak pit by mid-2022. With another seven vacuum vessel sectors to equip prior to assembly and installation, is there still room for progress and additional gains in time? 'Always,' smiles Alex Martin.

Image of the week | The night shift 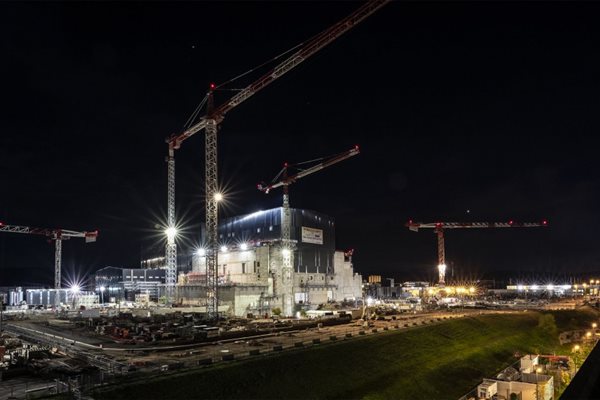 The ITER worksite hardly ever sleeps. When employees leave their offices and head home, the night shift begins for dozens of workers and specialists of all trades. In order to ensure the continuity of the most delicate operations and meet deadlines, activity on the ITER worksite is organized in two and a half shifts. Lights on the construction site are never turned off and cranes are rarely immobile. For safety reasons, some activities, such as radiographic tests to verify the quality of welds in critical components and assemblies, can only be performed at night, when most buildings have been vacated. The ITER worksite at night breathes a unique atmosphere of mystery and awe, of muted noises and otherworldly lights. 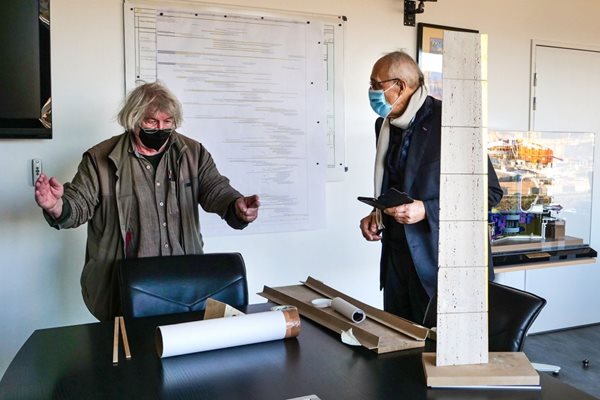 Just back from a trip to the Italian village of Asciano, where he oversaw the selection of stone for Résonances, French sculptor Jean-Paul Philippe was at ITER this week to present a small-scale model of his creation. It will stand in the village of La Roque d'Anthéron, a monumental sculpture in stone that resonates with another work by the artist in the Italian town of Asciano, and yet is resolutely turned toward ITER. A tall pillar built from seven stone blocks, each one associated with one of the ITER Members. Gold-covered angles, designed to reflect sunlight toward the ITER machine on certain symbolic dates throughout the year. A location selected to place it directly along the trajectory of ITER component convoys, as they make their way from the Mediterranean Sea to the ITER site. The project is independent financially from the ITER Organization, but has the support of a number of staff, including ITER Director-General Bernard Bigot who is serving as the first president of the Résonances endowment fund. 'The Résonances monument will have symbolic references to fusion, ITER, and the energy of Sun and stars; it will also highlight the large international collaborative nature of the ITER Project, with a stone for each of the seven ITER Members. In this way, it creates an important 'resonance' between Art and Science...' The monument is in the early stages of creation. Jean-Paul Philippe travelled to the travertine quarry in Asciano to choose the stone blocks in October and to plan for their engraving. And last week, he presented a small-scale model to the ITER Director-General and discussed some of the finer details of the nine-metre-tall sculpture planned in La Roque d'Anthéron, as well as of a smaller replica that will be installed at one of the entrances to the ITER site.  If all goes according to plan the elements of the artwork, already shaped and assembled at the artist's studio situated in Siena, Italy, will be transported in June 2022 to the commune of La Roque d'Anthéron for assembly. As 'Résonances' is funded by private financial contributions, it is possible for anyone interested in ITER or in the aesthetic and symbolic value of the sculpture to make a donation towards the creation of the monument. Fundraising is underway now through the 'Résonances' project website. The artist has proposed a way to incorporate donors by name within the monument to acknowledge their contribution.

It is time to bet big on fusion energy

The chase for fusion energy

Finally, a Practical Use for Nuclear Fusion

Physicists want to create energy like stars do. These two ways are their best shot.