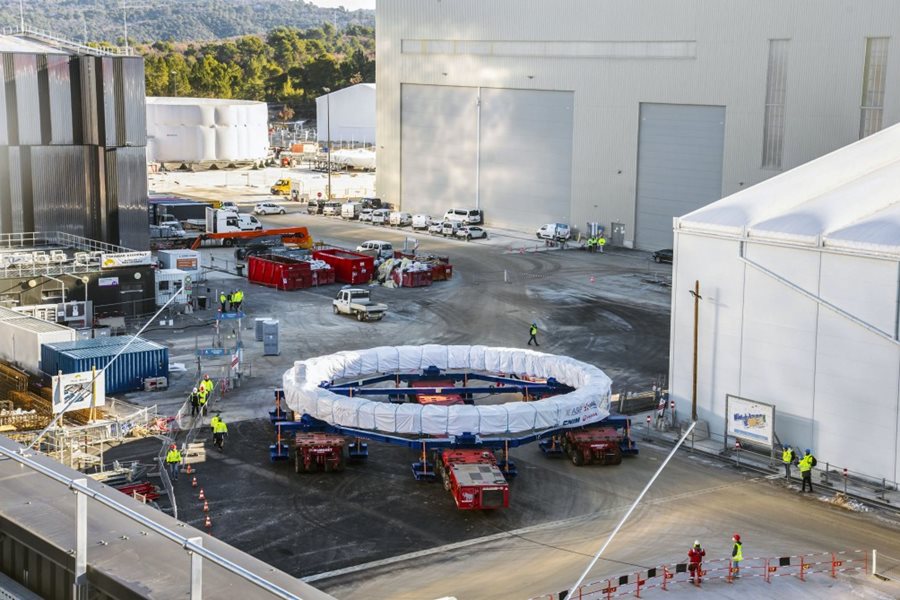 Whatever their size or position, the role of the ITER poloidal field coils is to shape and stabilize the plasma inside the vacuum vessel. However, as the plasma is not vertically symmetrical, the strength of the magnetic field the coils need to exert in order to create and maintain 'plasma equilibrium' depends on their location. For instance, although they are the same size (17 metres in diameter), PF5, located below the mid-plane of the vacuum vessel, will generate a much stronger magnetic field than PF2, located above.  And the same goes for bottom coil PF6 and top coil PF1, or for 'middle coils' PF4 and PF3. Because the magnetic field is defined by the intensity of the electric current times the number of conductor turns, the coils encircling the upper half of the tokamak are much lighter than their siblings installed below. On 17 December 2021, PF2 was moved to temporary storage—the second of four ring-shaped coils to exit the on-site European manufacturing facility. (The first, PF5, had followed the same path on 16 April 2021 and has since been installed in the Tokamak pit.) At 204 tonnes, PF2 weighs approximately 120 tonnes less than PF5 despite an identical diameter. This is explained by the fact that PF2 comprises six double pancakes, each wound from two layers of 10 conductor turns (6 km of superconducting cable in all), whereas PF5 comprises eight double pancakes, wound from two layers of 14 conductor turns each (11.5 km of superconducting cable in all). Fewer turns is not the only reason that PF2 was produced in record time—fully 12 months less than its sibling PF5. Such a remarkable result can be credited also to the 'lessons learned' during the fabrication of the first coil. 'Several factors contributed to reducing the manufacturing time,' explains Pierre Gavouyère-Lasserre, Deputy Project Manager for poloidal field coils at the European Domestic Agency Fusion for Energy. 'Some have to do with the physical rearrangement of the facility, such as the partition into two main areas, each under the responsibility of one contractor. A building extension was also created, which gave us an additional working station and allowed us to reconfigure the whole workshop.' The improvement of tooling performance through better preventive and corrective maintenance activities also played its part, as did the installation of a third overhead crane to facilitate the management of coactivity in the workshop. It is the human factor, however, which seems to have had the strongest effect on manufacturing performance. 'The acquired knowledge, skills and experience of the operators (both on machine control and manual operations), the synergy between the different actors, and a better management of the interfaces between our six contractors decisively contributed to the operation's success.' As PF5 is now installed on temporary supports in the Tokamak pit and PF2 is in storage pending its turn in the installation sequence, work keeps progressing on the two remaining coils, PF4 and PF3, both 24 metres in diameter. All eight double pancake windings for PF4 are now stacked and ready for resin impregnation and the individual impregnation of the first three double pancakes for PF3 is underway. PF4 will be the next poloidal field coil to exit the workshop, finalized and handed over to the ITER Organization during the first semester of 2023. PF3 will follow approximately one year later. See a recent update on poloidal field coil manufacturing from Fusion for Energy. 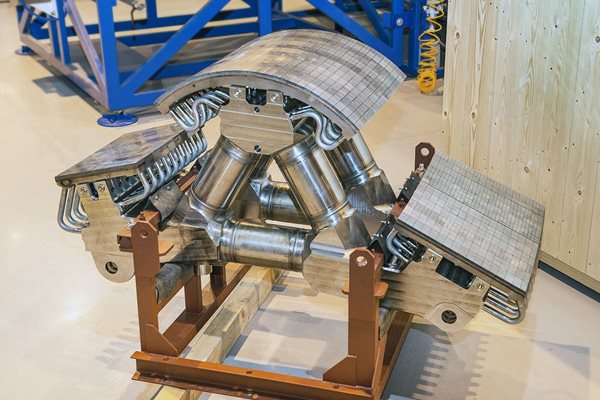 A multiyear qualification program in Russia has concluded with the successful manufacturing and testing of a full-scale divertor dome prototype at the Efremov Institute in Saint Petersburg—one of the main suppliers of the Russian Domestic Agency.  At ITER it will enter the first divertor integration trials, where prototypes of all divertor components produced by Europe, Japan and Russia will be assembled for the first time. In a tokamak device, the divertor is the component at the base of the plasma chamber that extracts heat and ash produced by the fusion reaction, minimizes plasma contamination, and protects the surrounding walls from thermal and neutronic loads. The divertor is carefully engineered to withstand large heat and particle fluxes on its plasma-facing surfaces—the inner and outer vertical targets and the dome—while providing exhaust channels for the escaping material. Arranged in a circle at the bottom of the vacuum vessel, the divertor is made up of 54 "cassette assemblies"—each one formed from an actively cooled structural backbone (the cassette body) in austenitic steel and copper alloy, plasma-facing elements covered in tungsten tiles and, for some cassettes, diagnostic systems. The vertical targets directly intercept the magnetic field lines and are designed to withstand heat fluxes as high as 20 MW/m²; the dome, located between the two divertor channels, may face heat fluxes up to 10 MW/m². In producing the full-scale dome prototype, engineers at the Efremov Institute of Electrophysical Equipment (JSC NIIEFA) had to learn how to master a series of technical operations (welding, machining, brazing the tungsten tiles) in full respect of extremely tight dimensional tolerances and leak tightness requirements. The tolerances are especially demanding on the plasma-facing surfaces and on the underside of the component, where the dome will be attached to the divertor cassette. The dome prototype arrived at ITER in December 2021. The next qualification step will be to create the first divertor assembly by integrating the dome prototype and prototypes of the inner (European Domestic Agency, Fusion for Energy) and outer vertical targets (ITER Japan) onto a full-scale prototype of the divertor cassette body (Fusion for Energy). According to the machine assembly schedule, the 58 divertor dome units are expected on site between 2023 and 2027.

Image of the week | Adjusting a correction coil's position

Compared to the massive ITER magnets that weigh up to 400 tonnes, the machine's correction coils are quite lightweight: at 4.5 tonnes, they are the smallest of the superconducting magnetic system. Distributed around the machine in three sets of six (top, bottom and side), they are tasked with reducing the minute deviations of the magnetic field caused by imperfections in the position and geometry of the toroidal and poloidal field coils. Based on a build-to-print design developed by the ITER Organization, they are the procurement responsibility of the Chinese Domestic Agency and its contractor ASIPP (Institute of Plasma Physics, Chinese Academy of Sciences). The first bottom correction coil (BCC/4) was installed in the assembly pit on 21 October 2021, followed five days later by BCC/5. The correction coils must be precisely positioned in a very restricted space between poloidal field coils #5 and #6, lower magnet feeders, and staging platforms. Depending on the coil, the 'room to move' is in the range of 15 to 25 mm. Facing similar constraints, a third kidney-shaped bottom correction coil (BCC/6) was successfully installed on 5 January. Workers from the CNPE Consortium (Tokamak assembly contractor TAC/1) are seen here carrying out metrology measurements and adjusting the coil's position on its yellow temporary supports (final positioning will be possible only when all vacuum vessel modules are in place). A fourth bottom correction coil (BCC/3) is scheduled for installation this week, while the full set of six should be in place by the end of February. 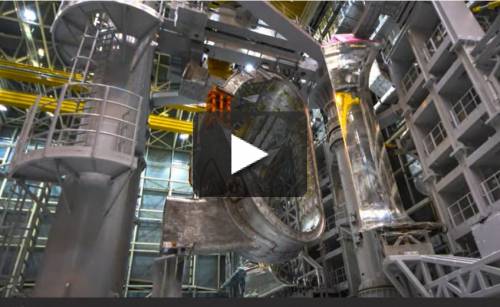 How will we extract the particles from ITER cryopumps?

UK brings fusion to the forefront

Unexplainable podcast: The Quest to Build a Star

Fusion energy is a reason to be excited about the future

Was 2021 A Breakthrough Year For Fusion Energy?

Will Nuclear Fusion Ever Power the World?

After years of doubts, hopes grow that nuclear fusion is finally for real and could help address climate change

PPPL unravels a puzzle to speed the development of fusion energy

How are the MITICA beam line components shaping up?

Closing in on Fusion

How Switzerland and the UK stayed part of EUROfusion