Magnets | Have the last pancake! 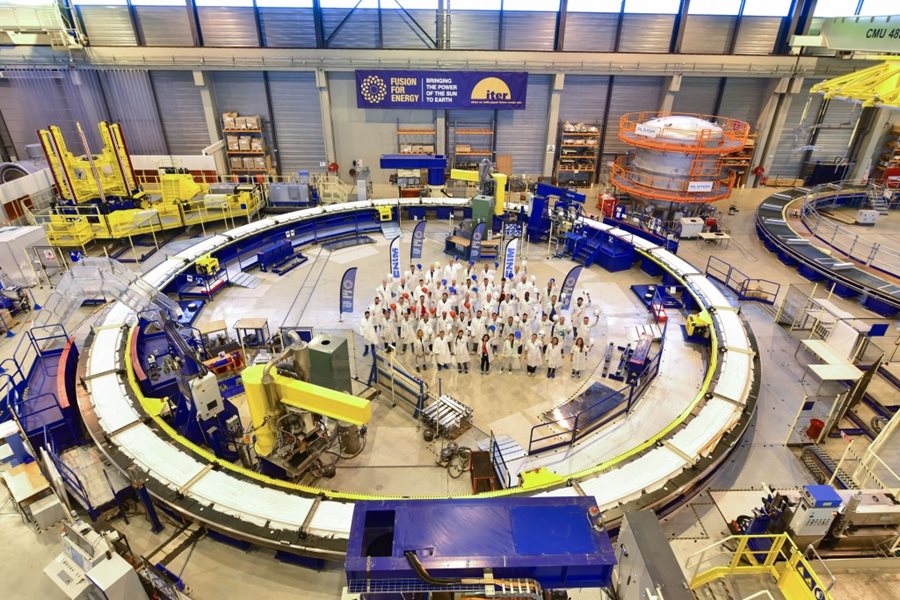 After close to five years of intense activity, the winding table at the south end of the European poloidal field coil factory on site is now empty. Last week, the last circular conductor arrangement ('double pancake') required for the last ring-shaped coil still in fabrication was finalized and moved to the next workstation. Since production began in August 2017, 30 such double pancakes have been produced for the four poloidal field coils that Europe manufactured in the facility. With the finalization of this last double pancake, a formidable industrial venture is coming to an end. Like its predecessors on the production line, the last pancake will be moved from one workstation to another to be insulated, resin-impregnated, stacked and eventually compressed with seven other similar arrangements in order to form a 385-tonne, 24-metre-in-diameter ring magnet. Manufacturing such large and massive high-tech components required bespoke tools and sophisticated techniques that had never before been implemented at that scale. The European Domestic Agency, Fusion for Energy, and its contractors went through a steep learning curve, with operators acquiring skills and experience on both manual operations and machine control. Tooling performance was improved through better preventive and corrective maintenance activities, thus reducing the number and duration of production stops. Time and energy was also saved through the constant progress achieved in the scheduling and sequencing of activities. Drawing from the lessons learned during the manufacturing of the first coil (PF5, 17 metres in diameter), operators reduced the fabrication time of the second, PF2, by a full year. The informal celebration that took place in the winding facility on 23 June acknowledged the remarkable synergy between the many contractors involved in the venture. Coming from different worlds, the European contractors ASG Superconductors S.p.A., CNIM, Dalkia, Veolia, Mammoet, Criotec Impianti SpA, Elytt Energy, ALSYOM, SEA Alp, and SEIV all worked as one team, which decisively contributed to the success of the operations. In August, the winding table will be dismantled by the very company, the Italian SEA Alp, who designed and manufactured it. The winding facility will feel a bit empty with the table removed. 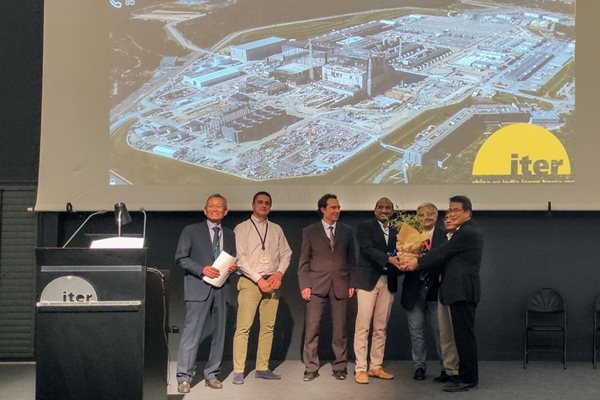 On 16 June 2022, the ITER amphitheatre was packed with life again after two years of silence, part of a new project culture initiative called "Commit to Deliver." The Organization had invited the team that had lifted and safely positioned the first vacuum vessel sector module in the pit last month, and the team representing the cooling water plant, which has been turned over for commissioning. Two important milestones for the ITER Project that required a moment of reflection ... and celebration. In the ITER world, a "module" is an assembly of one vacuum vessel sector, two D-shaped toroidal field coils and corresponding thermal shield panels. When piping, attachments, and lifting gear are added, the total weight of the module reaches 1,380 tonnes—the equivalent of four fully loaded Boeing 747 airplanes. In May, the first of nine ITER sector modules had 'lifted off' during an operation that took more than one year to prepare and plan. The spectacular lift (see this video) tested the limits of the Assembly Hall structure, the lifting capacity of the overhead crane, the complex rigging system, and—perhaps most of all—the coordination of a 50-person team across many different companies and organizations. ITER's high-performance heat rejection system covers an area of 6,000 m² on the ITER platform and is 'a highly visible signal that fusion technology and research has reached the industrial level,' as interim ITER Director-General Eisuke Tada said in his address. The system provides a very large capacity: at the peak level—what is called the plasma 'burn phase'—the heat load will reach 1145 MW. The water needed to remove this heat load will circulate at the rate of 10 m³ per second. 'These are impressive achievements—both in terms of technical feasibility and multi-organizational collaboration—showing our commitment to deliver,' Director-General Tada said before asking the teams to come on stage to receive their awards. For the past year, the ITER Organization has promoted the importance of a unified team approach, a mindset that is called 'Commit to Deliver (C2D).' In recognition of specific team successes, butterfly bushes are planted in a dedicated area near Headquarters. 'We hope they will bloom for years into the future, attracting many butterflies, as a reminder of the great work you have all achieved.' 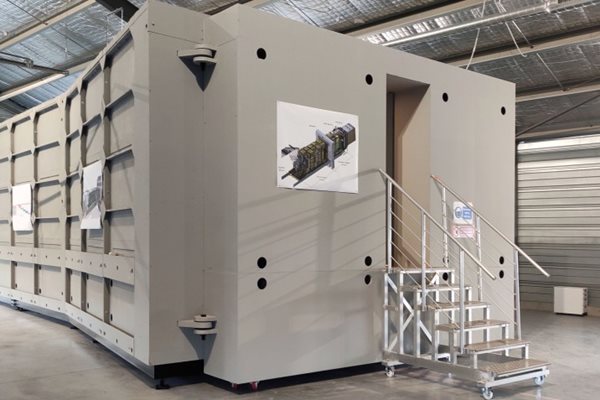 Every port in the ITER vacuum vessel has a corresponding port cell in the Tokamak Building. These corridor-like spaces allow heating and fuelling pipes, electricity cables, diagnostic lines and maintenance systems to pass through to the machine from outlying galleries. The ITER Port Plugs & Diagnostics Division is using a real-size mockup of a port cell to perform safety-related tests and to practice maintenance actions and checks for port-based diagnostic components. Since human intervention is involved in port cell maintenance, dress rehearsals will be run to make sure equipment can be physically accessed and workers can get the job done quickly enough to minimize exposure to contaminants and radiation. "We want to make sure we have a testbed before ITER operation," says Victor Udintsev, Section Leader in the Diagnostic Engineering Section. "But that won't be its only use. Diagnostic port plugs will have to be accessible and maintainable during the lifetime of ITER. So once operations begin, we would like to use the same dedicated mockup to practice interventions." The first version of a simplified full-scale mockup, replicating a real port environment at ITER, has already been built at an off-site facility near ITER. The mockup is made of relatively cheap materials, including wood. "We started to work on the mockup more than a year ago, collaborating with external companies for the design and construction of the facility in a building we rent in Corbières," says Udintsev. "The first phase of port plug mockup construction is now completed. On the scale of ITER projects, that was a quick exercise." "We've already experimented moving in and out of the structure to check for accessibility," says Udintsev. "We practiced with a person in a bubble suit, and we also did a dry run of a visit with safety hats through the facility. These tests were not recorded or used for any proof. They were just early attempts to use the facility. Having said that, some of the early feedback has already been communicated back to engineers to improve the design of the ports." While the full-scale mockup is already in a state where initial tests can be run, further upgrades are expected. For example, shielding and diagnostic windows will be added, and mini mockups of some of the diagnostic systems will be put inside. While the mockup was designed primarily to carry out maneuverability tests for humans wearing bubble suits, it is fully compatible with future robotic operations. As the ITER design matures and engineers from maintenance and remote handling develop tools, the new tools may be brought into the mockup to see how they behave inside a close approximation to the real environment. While the nature of the port cells is fundamentally the same, some of the components might be arranged differently, and some ports cells have a few unique features. To accommodate these small differences, the mockup is configurable to meet the needs of any particular port. The mockup is made of timber around a steel frame, on which are mounted rails that can be used to withdraw bogies (a wheel-driven platform that slides on the rail). The bogies slide out of the port mockup as they will do in a real port cell. "We constructed this to be able to be split in two," says Michael Keane, an Engineering Consultant for Diagnostics. "We will also be able to disassemble it at some stage for storage purposes because this is a lot bigger than the facility doors. We can't disassemble it completely, but enough to store it." The near-term work is to have a complete set of very detailed equipment delivered. These mock components, which are full-sized and made of relatively cheap material, should be delivered by July 2022. Once all the equipment is delivered, the mockup will get near daily use. Not only will diagnostics teams use it for their investigations, but maintenance will also use it to test procedures. The mockup is also likely to be used in ways that have not been thought of yet. "So much of our work over the years has been conceptual CAD drawings," says Keane. "But now with this mockup, which is quite a substantial structure, people walk in and immediately start to think about all the things they could do with it."

Produced by the Microwave & Imaging Sub-Systems group of the French multinational Thales, which provides electrical systems and services for the aerospace, defence, transportation and security markets, this video describes the company's work to design and build radio frequency and microwave sources for the ITER Project. The mastery of vacuum, high voltage and microwave technologies is critical to creating wave-generating sources of ITER's radiowave external heating systems. The company is bringing all of its expertise to bear to build the European-sourced gyrotrons of the electron cyclotron heating system and the tetrodes of ion cyclotron heating system and contribute to "a disruptive alternative" in the 21st century energy mix. See "Radiofrequency and Microwave Sources for Fusion Energy" on YouTube.

An amateur physicist built a fusion reactor at home. This article may help you build your own

Will Nuclear Fusion Become the Solution for Net Zero Emission in 2050?