Fusion world | "It just isn't like any other kind of research..." 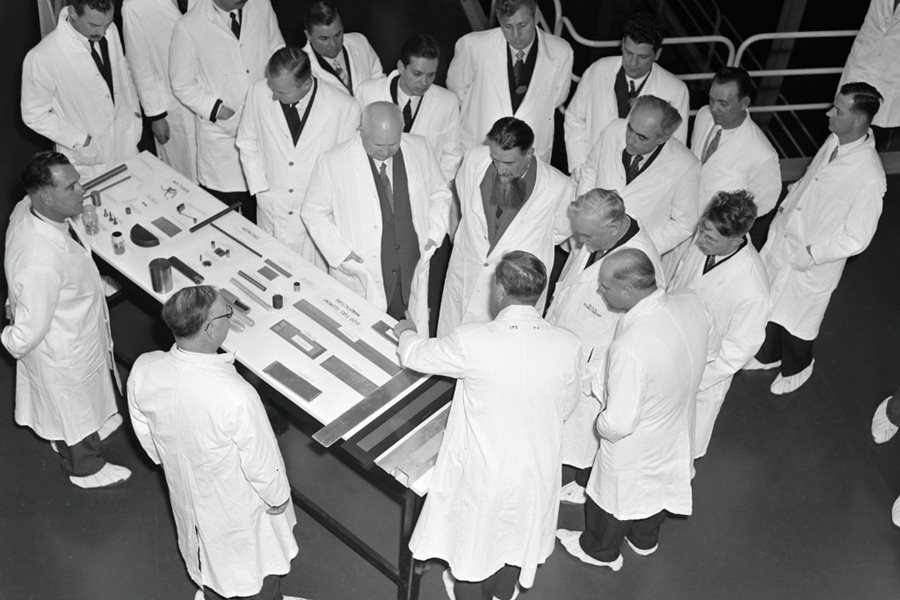 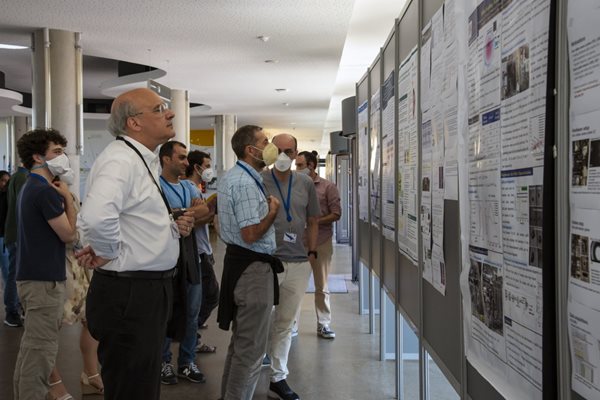 Disruptions of tokamak plasmas (fast events leading to the complete loss of thermal and magnetic energy on millisecond timescales) can pose significant risks to the lifetime of components in large-scale devices such as ITER and other future tokamaks. The physics processes underlying these events are complex and have been a long-term research topic in the tokamak community, but the urgency in this area has now substantially increased since reliable schemes to handle disruptions must be in place when ITER operation begins. An international community of plasma physicists and engineers has been mobilized to tackle this difficult problem, in large part as a result of the formation by the ITER Organization of an ITER Disruption Mitigation System (DMS) Task Force. These specialists are committed to take up the challenge to improve the physics understanding and to develop and optimize solutions for disruption avoidance and mitigation. Last week, at the 2nd International Atomic Energy Agency (IAEA) Technical Meeting on disruptions hosted at ITER, the IAEA and the ITER Organization welcomed more than 90 experts in the field. While the first meeting in this series in 2020 had to be held by videoconference, this time more than 35 experts took the opportunity to meet in person at ITER, enjoying live discussions during the oral sessions and in front of the posters on display in the entrance hall of ITER Headquarters. They were also, many for the first time, able to see the spectacular progress on the ITER construction site during specially arranged tours guided by members of the ITER Science Division. This series of IAEA technical meetings aims to coordinate and discuss in detail experimental, theoretical and modelling work covering a wide range of key topics: Heat and electromagnetic loads as well as high energetic runaway electrons Disruption prediction to avoid or mitigate these events Physics and technology for load mitigation The dense 3.5-day program included 32 oral presentations (of which 7 were invited), 19 poster presentations, and free discussion sessions. Developments for disruption mitigation in ITER had a prominent place in the agenda, including a special session on technology developments relevant for the ITER disruption mitigation system, which is rapidly heading towards its final design stage to ensure readiness for the first ITER operational campaigns beyond first plasma demonstration.

On site | Distinguished visitors from Korea 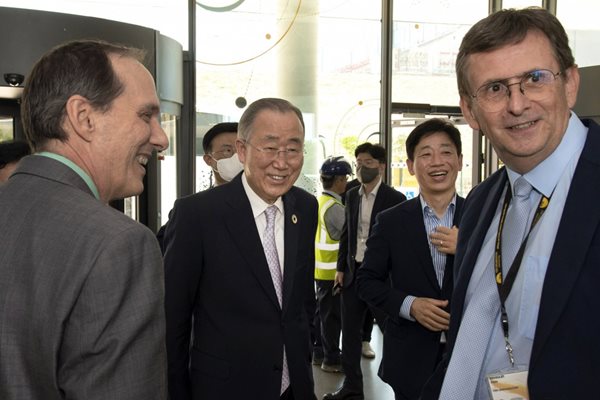 Participants to the Europe-Korea Conference on Science and Technology (EKC) in Marseille took an afternoon off, last week, to pay a visit to the ITER site. The 120-person-strong group was headed by Korea's Vice-Minister of Science and ICT, Tae-Seog Oh, accompanied by former Secretary-General of the United Nations (2007-2016) Ban Ki Moon, now Chairman of the Foundation for a Better Future. Whereas Vice-Minister Oh receives regular reports on ITER, former Secretary-General Ban was new to the project's progress and challenges. As Kijung Jung, the head of the Korean Domestic Agency, guided the group through site landmarks such as the Poloidal field Coil Winding Facility, the Assembly Hall, and the Tokamak pit, Ban discovered something that was familiar to him: nations working together for a common goal. The ITER collaboration, which brings together 35 nations, is smaller that the United Nations, which comprises 193 Member States. 'But what I sense here is a similar spirit,' said the former Secretary-General. Standing at the foot of the giant, Korean-built sector sub-assembly tools where ITER vacuum vessel sector 'modules' are assembled, both men felt an intense pride for their country. 'Of course there are issues, delays and unpredictable challenges,' said Vice-Minister Oh. 'This is inevitable with such a complex, multinational, one-of-a-kind venture.' Korea—which passed a 'Fusion Energy Development Act' as early as 2006—is determined, in the Vice-Minister's words, 'to make it happen and find ways to speed up its availability.' As for Ban Ki Moon, whose most significant contribution during his tenure as the 8th Secretary-General of the United Nations was the adoption of the 2015 Sustainable Development Goals and the Paris Agreement on Climate Change, he sees in ITER and fusion a key element in the global fight against climate change. 'I believe in the power of science,' he said at the close of the visit, asking Kijung Jung to provide him with more information, documents and illustrations for a deeper understanding of the promise of ITER—this 'most ambitious project' for the future of humankind.

Image of the week | In the slow cooker 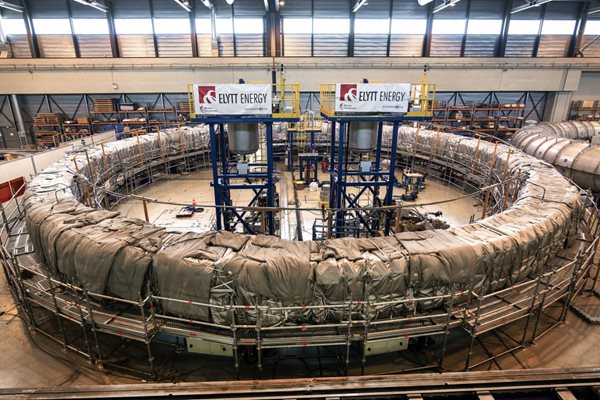 The thermostat is set at 140 °C and the timer on 72 hours. But contrary to the roasting of a Thanksgiving Turkey, the 'curing' of the resin inside a poloidal field coil cannot be left unattended. More like the cooking of a soufflé, the operation requires constant attention and non-stop monitoring. The curing phase is the last phase of the resin impregnation process. It is particularly delicate, as it aims to ensure the electrical insulation and rigidity of a coil before it is equipped and cold tested. In the on-site winding facility, poloidal field coils PF5 and PF2, both 17 metres in diameter, went through this process before. With poloidal field coil PF4, the process will be the same, except for the size of the component in question (24 metres in diameter) and the quantity of resin (2,700 litres) that needs to be injected and cured. In the curing process, the resin that was injected in the coil at a temperature of 50 °C is heated to 140 °C by a strong electrical current fed to the conductors (the Joule effect) and by electrical resistances positioned around the mould. Since resin impregnation began for PF4 two weeks ago, staff from the European Domestic Agency Fusion for Energy and its contractors have taken shifts to cover the 24/7 monitoring of the operation. The mould that contains the impregnated PF4 will be disassembled in mid-August and the coil moved to the assembly station in early September. Following final assembly and cold test operations, the finalized coil should be transferred to the ITER Organization before mid-2023.

Investment in private fusion companies has more than doubled in the past year and eight new companies have been founded, bringing the total to around 33. According to the global fusion industry 2022 Report, six companies have now each raised over $200m in total, with notable investments in the last year including over $1.8 billion for Commonwealth Fusion Systems and $500m for Helion Energy, allowing them to develop pilot plants to demonstrate fusion electricity. The huge step up in investment, coupled with increasing government support for fusion in the U.K. and the U.S., is increasing confidence within the fusion industry. Andrew Holland, Chief Executive Officer of the Fusion Industry Association, states in the report, 'We must not see a 'competition' between publicly funded and privately funded fusion approaches; instead, we must build real partnerships [...] With investment accelerating, it is increasingly likely that commercial fusion will become a reality within the next two decades, providing the basis for prosperity, safety, and security for many years to come.' Photo: Commonwealth Fusion Systems and its SPARC project raised over $1.8 billion last year. Read the full article in Forbes.

In advance of the delivery of the first European vacuum vessel sector this autumn, the European Domestic Agency Fusion for Energy has released a new series of photos from the European workshops in Italy where the sub-parts of five sectors are manufactured and assembled. At Mangiarotti S.p.A (Monfalcone), see the final activities underway on sector #5, which will be the first to arrive. The four sub-segments have been welded into the final D shape and detailed inspections are underway. At Walter Tosto S.p.A (Chieti), technicians on working on multiple sectors, performing welding, inserting in-wall shielding, and carrying out inspections. And at Belleli Energy EPC (Mantova), one poloidal segment is shown in the radiographic testing bunker, while others are prepared for welding, or cleaned during final inspection. Fusion for Energy (F4E), managing the European contribution to ITER, has entrusted the fabrication of five European vacuum vessel sectors to the AMW consortium (Ansaldo Nucleare, Mangiarotti, Walter Tosto) and their subcontractors ENSA, Belleli. Completion figures range between 81% (Sector #2) and 97% (Sector #5).  See the photos on the Fusion for Energy Flickr page (May 2022). 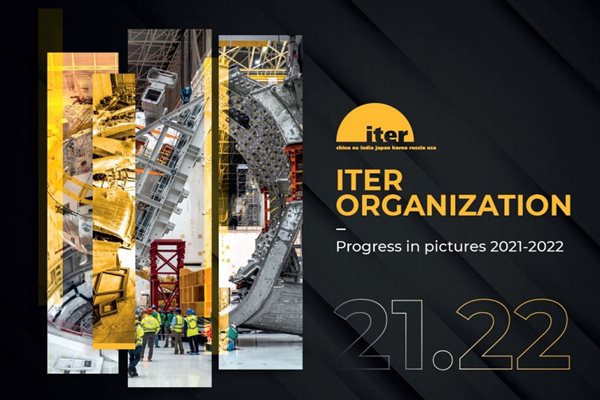 Smaller, stronger magnets could improve devices that harness the fusion power of the sun and stars

The global industry in 2022: Report launch event in Brussels

The Differences Between Nuclear Fission and Fusion

"Sometimes you need to inject some pragmatism"

Go with the flow: New findings about moving electricity could improve fusion devices

Is the dream of clean and unlimited nuclear fusion energy finally within reach?