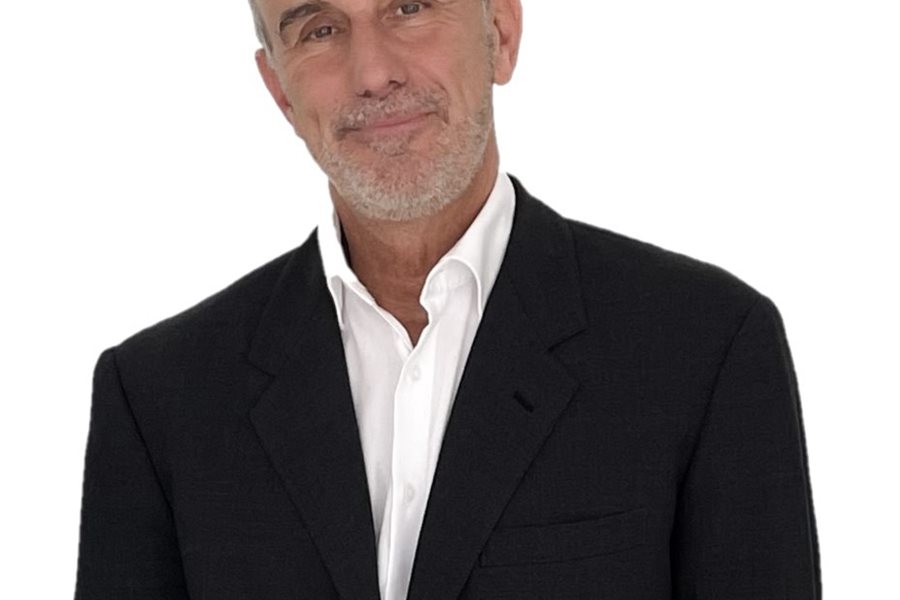 Convening in an extraordinary session in Paris, the ITER Council has appointed Pietro Barabaschi as the next Director-General of the ITER Organization. Mr Barabaschi is expected to take office in the coming weeks. Following the passing of former Director-General Bernard Bigot in May 2022, the ITER Council launched a search and recruitment effort to select his successor. In an extraordinary meeting in Paris on 14-15 September 2022 the Council held interviews with the finalist candidates and unanimously chose Pietro Barabaschi to lead the ITER Project. At the same time, the Council thanked Eisuke Tada for his service as Interim Director-General during the transition period. Trained as an electro-mechanical engineer, Pietro Barabaschi has spent virtually his entire career in the service of fusion research. Shortly after his university studies in Italy, he joined the Joint European Torus, JET, where he worked in the Department of Machine Development. During the Engineering Design Activities (EDA) phase for ITER, he was part of the Joint Work Site in San Diego (USA) and later the Joint Work Site in Garching/Munich (Germany), where by 2006 he was Deputy to the Project Leader and Head of the Design Integration Division. Since 2008, Mr Barabaschi has been the Head of Broader Approach Programme and Delivery for Fusion for Energy (F4E), the European Union organization responsible for Europe's contribution to ITER. Twice also—in 2015 and this year since June—Pietro Barabaschi served as Acting Director of Fusion for Energy in Barcelona, Spain, responsible for overall management of the organization (450 staff) and the implementation of reform measures while recruitment was ongoing for a new Director.   The Broader Approach activities complement the ITER Project and aim to accelerate the realization of fusion energy. The Broader Approach Agreement, signed in 2007, set into motion three projects, all located in Japan, with the joint investment of Euratom and the government of Japan (represented by its Ministry of Education, Culture, Sports, Science and Technology, MEXT)*. The work includes the construction, now completed, of the advanced tokamak fusion device JT-60SA, the construction of the prototype accelerator for the IFMIF project, and preliminary work on DEMO, the future European demonstration reactor. 'I'm conscious of the immense responsibility that I am taking on, and feel privileged for having been selected through an intensive competitive selection process. I wish to thank the ITER Council for this honour,' declared the incoming Director-General. 'The first 15 years of my career have been dedicated to ITER and I now hope to be able to take on what my predecessors have done towards our common objective. I will make it a priority to improve the integration of ITER Organization and Domestic Agencies, both essential elements of the ITER Project, now and even more in the forthcoming phases of commissioning of ITER.' The new ITER Organization Director-General is expected to take office in October. *Since 2016 and the establishment of the National Institutes for Quantum and Radiological Science and Technology (QST) in Japan, the agreement has been developed collaboratively by implementing agencies F4E and QST. In 2020, the Agreement was extended to cover further cooperation on research and development in the field of fusion energy. Read the press release issued on 15 September 2022 by the ITER Council in English and in French. A brief curriculum vitae for Director-General Barabaschi can also be downloaded in English and in French. 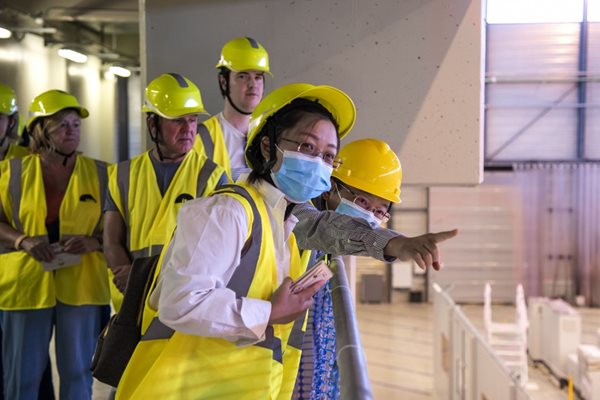 In a first at ITER, the gates of the monumental worksite opened on Saturday 17 September for a family-only Open Doors Day event, reserved for the families of staff and contractors employed on site by the ITER Organization and the European Domestic Agency. Since October 2011, the ITER Organization has been inviting the public in for a closer look at ITER construction. Organized in association with the European Domestic Agency Fusion for Energy, the traditional Open Doors Days attracts a combination of members of the public at large and ITER staff and contractors eager to share their work environment with families and friends. But whereas in 2011, the ITER Organization had 471 direct employees, that number has more than doubled since. Adding staff employed on site by Fusion for Energy, as well and construction and assembly contractors, the number of people active daily on the ITER site is now close to 5,000.  It is no wonder, then, that during the last Open Doors Day event in June the 800 available places filled up in less than two hours. This semester, thanks to a large number of willing volunteers and management support from both organizations, two events were planned—one exclusively for staff and contractors' families, and a second (coming up in October*) for members of the public. The day was a success. The weather was perfect, the food trucks never ran out of crepes and ice cream, and the "plasmagicians" distributed smiles all around. See a few scenes from the ITER Family Open Doors Day in the gallery below. *The date of the public Open Doors Day in October 2022 will be announced soon on the ITER website. 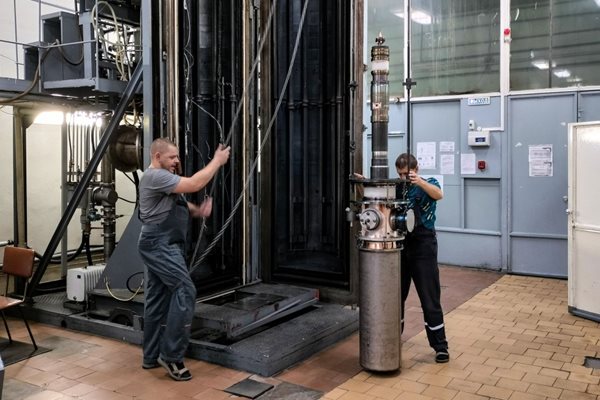 Twenty-four electromagnetic wave generators called gyrotrons are at the heart of electron cyclotron resonance heating—the system on ITER that will initiate each plasma shot, contribute heating power to the plasma, and suppress certain types of plasma instabilities. Of eight gyrotrons expected in total from ITER Russia, four are on their way now to the ITER site. Following in the tracks of the 14 trucks of electrotechnical equipment that arrived last month, a new in-kind contribution convoy is travelling to ITER from Russia. Last week, the trucks left the GYCOM enterprise in Nizhny Novgorod (Moscow region) carrying four gyrotron sets—high-tech devices for auxiliary plasma heating and current drive designed for exceptionally challenging power and frequency requirements (1 MW at 170 GHz). Twenty-four gyrotrons sets will be part of ITER's electron cyclotron resonance heating system, each one generating a microwave beam over a thousand times more powerful than a traditional microwave oven. These microwave beams will travel along 160 metres of waveguide and then launch into the ITER Tokamak to ionize the neutral gas and generate the very first ITER plasma, in much the same way that a spark plug ignites a car motor. Eight gyrotrons must be in place for ITER's First Plasma (four from Russia and four from Japan). Russia developed the first gyrotron back in 1964, generating 6W at 10GHz for continuous operation. Since then, scientists around the world have steadily increased gyrotron output power. The Institute of Applied Physics of the Russian Academy of Sciences is engaged in the development and scientific guidance for the creation of these unique devices, while their fabrication is carried out at GYCOM.  Anatoly Krasilnikov, director of ITER Russia, celebrated the achievement. 'It is difficult to overestimate the importance of the supply of Russian gyrotron sets, because without these highly sophisticated systems it is impossible to obtain First Plasma in the reactor. [...] This [milestone] is the result of many years of diligent work of our scientists and engineers who have tremendous experience and groundwork in the manufacture of such devices.' Of eight gyrotron sets under the responsibility of the Russian Federation, six have already passed factory acceptance tests and the seventh set is in manufacturing. Late last year, ITER Russia delivered a batch of gyrotron auxiliary systems that included water cooling equipment, cryocoolers, microwave beam forming systems and other high-tech elements. 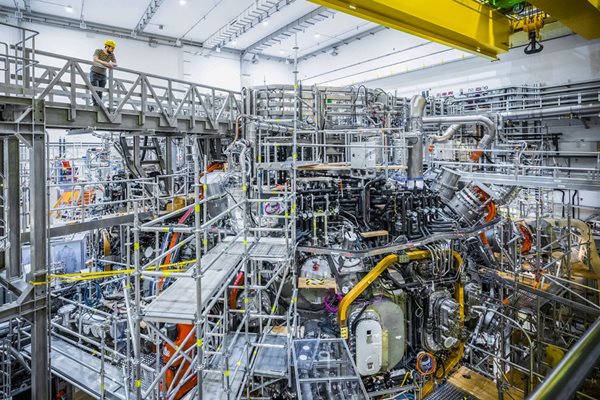 Improved equipment on Wendelstein 7-X will permit the stellarator device to achieve new scientific heights in a campaign planned to begin this autumn. Science at the Wendelstein 7-X stellarator at the Max Planck Institute for Plasma Physics (IPP) in Greifswald, Germany, is progressing step by step in its quest to prove that the quality of the plasma confinement in a stellarator can reach the level of competing tokamak-type systems. In it first two operational campaigns (2015/2016 and 2017/2018) scientists achieved significant milestones on the machine, obtaining a first plasma in helium in December 2015, a first plasma in hydrogen a few months later, and a record "triple product" value for stellarators in 2018. In the multiyear shutdown phase that followed, the goal was to transition to actively water-cooled components in the vacuum vessel to allow for a doubling of input heating and, in turn, improved performance. Now, with 6.8 kilometres of cooling pipes (feeding 657 independent cooling circuits to in-vessel components), upgraded or new heating systems, and 40 new diagnostics, the fusion facility is ready, within a few years, to attempt plasma operations lasting for up to 30 minutes. The first experimental period of the new campaign is expected to last until March 2023 "With the improved equipment, we want to be able to keep high-performance plasmas with up to 18 gigajoules of energy turnover stable for half an hour in a few years," explains Professor Dr. Thomas Klinger, Head of Stellarator Transport and Stability Division, IPP, Greifswald. "Now it will be a matter of approaching this goal step-by-step and learning more about plasma operation at higher energies without putting too much stress on the machine too quickly.'  See the original press release on the IPP website.

The 32nd annual Symposium on Fusion Technology (SOFT) has opened in the Croatian city Dubrovnik.  The biennial symposium on fusion technology is the most important conference in the field in Europe, bringing together scientists, engineers, industry representatives and exhibitors from all over the world and focusing on the latest developments in fusion experiments and activities. SOFT includes invited, oral and poster presentations, as well as industry and R&D exhibitions. SOFT 2022 is organized by the Ruđer Bošković Institute (RBI) from 18-23 September in a hydrid format. ITER's Alain Bécoulet, Head of the Engineering Domain, opened the first plenary session on Monday 19 September with a talk on the status of ITER procurement and assembly. During a satellite event in the afternoon, the SOFT 2022 Industry Day, numerous business opportunities in fusion for European industry were presented by representatives of the ITER Organization, Fusion for Energy (F4E), EUROfusion, and the Consorcio IFMIF-DONES España. The ITER Organization is present throughout the week with the ITER stand. In this photo, the newly appointed ITER Director-General Pietro Barabaschi (right) is at the stand with Alain Bécoulet. See the conference website for more about SOFT 2022.

An award for Sergio Orlandi, given and received in Latin

Sergio Orlandi's mastery of Latin—a language he considers 'more perfect than mathematics'—proved precious when, on 15 September, he was awarded an Honorary Professorship from the University of Life Sciences in Lublin, Poland. In Poland, Latin is the language universities use in such circumstances. The Rector of the University pronounced his speech in Latin, Sergio's laudation was issued in Latin, and it is in Latin that the Head of the ITER Plant Construction Department responded. What connects Sergio and the University of Life Sciences in Lublin is his experience in the nuclear field and his reflexion on sustainable energy as a member of the European Academy of Science and Arts, and as the Dean of the Academy's Technical and Environmental Science commission. His experience in the construction of Chernobyl's 'sarcophagus' following the nuclear plant's 1986 accident, and also in the management of the liquid waste from the devastated reactors was also an important factor in the connexion between the nuclear engineer and the university. Lublin is located 600 kilometres from the site of the accident, and Poland is understandably quite concerned by the fallout that ensued. In Lublin, switching from Latin to English, Sergio gave a talk titled 'Flying into Nuclear Fission and Fusion Technologies in the Short and Medium Term.' He will soon be back to Latin and to his favourite bedside book—Ovid's Metamorphoses. 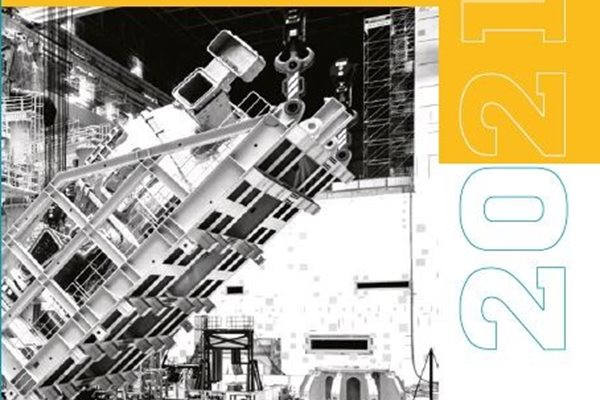 Wendelstein 7-X on the verge of new peak performance

As Tokamaks Get Hotter, Scientists Must Control the Unruly Plasma Inside

Quest for nuclear fusion is advancing — powered by scientific grit