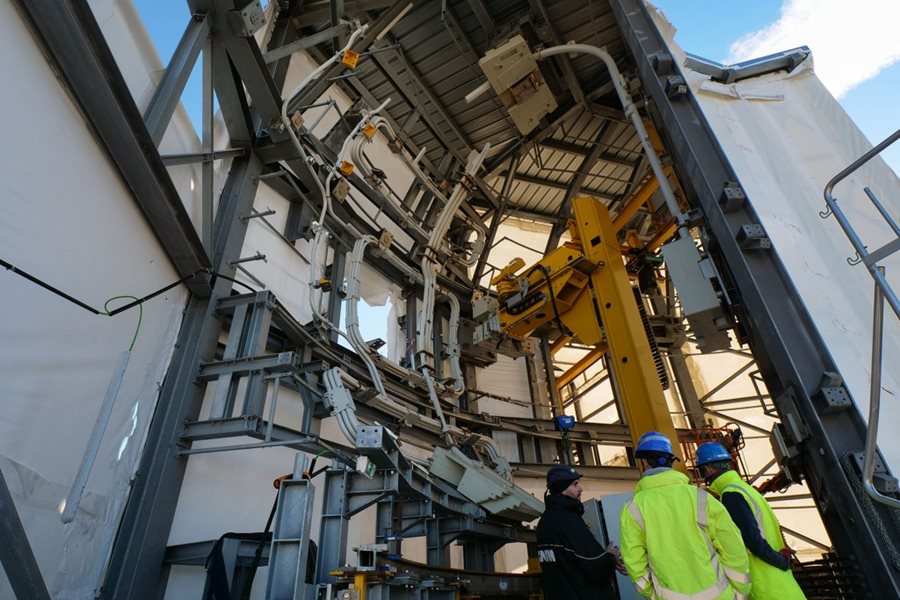 Inside of a test facility that reproduces the volume and geometry of the ITER vacuum vessel environment, a team from CNIM Systèmes Industriels has demonstrated that the tools it has designed for the installation of in-vessel components can carry out their tasks to better-than-required accuracy. A tower crane glides silently on rails, its manipulator arm supporting a 4.5-tonne blanket shield block. The crane stops and pivots toward the outboard wall of the vacuum vessel mockup, then stands immobile as the payload is raised to the correct height. As the manipulator arm extends forward to position the shield block on the wall, two technicians advance to finalize the installation manually from a cherry picker... The results achieved during this shield block test in early January 2023 were conclusive, with ITER observers recording a positional accuracy of 0.1 millimetres—even better than the 0.5 mm of accuracy stipulated in ITER Organizational technical specifications. 'Today we demonstrated that the in-vessel tower crane performs very well, and to our expectations,' says ITER engineer John Oldfield, who has been in charge of managing the mechanical handling contract with CNIM Systèmes Industriels since 2016. 'So in the future, when it installs the shield blocks [at ITER] it should do so very easily and quite quickly.' The January event concluded approximately one year of acceptance testing at the Trial, Test and Training Facility in La Seyne-sur-Mer (Toulon), France, during which bespoke technical solutions for the installation of four types of component systems that directly attach to the inner walls of the ITER vacuum vessel were tested successfully. These components—blanket shield blocks, blanket first wall panels, cooling manifolds (bundles of piping), and in-vessel ELM coils—must be transferred mechanically through an ITER port cell and into the vacuum vessel, then positioned inside the vessel with as little operator intervention as possible. Under a contract signed in 2015 with the ITER Organization, the team at CNIM Systèmes Industriels worked from ITER Organization concept designs to come up with innovative mechanical handling solutions. It also designed and built a scale-one trial and test facility—representing one-third of the ITER vacuum vessel and one adjacent port cell—to put the handling tools to the test in a realistic setting. Mockups for each type of component (similar in shape, mass and centre of gravity to the real thing) were designed and manufactured, as well as the interfacing elements, consisting of end effectors and handling frames, that permit the same tools to adapt to different components. 'There is no question; this has been a challenging set of tools to design,' says Oldfield. 'The tools have to handle components with very different shapes, weights and centres of gravity, and transfer them through the confined environment of an ITER port cell and into the vacuum vessel. They must be able to deliver the components to any position on the vacuum vessel inner wall, inboard or outboard. And the tools must achieve very high positional accuracy with a minimum of human intervention.' The principal tool is the in-vessel tower crane, a remote controlled mobile manipulator that travels 360° around the interior of the vacuum vessel on dedicated rails. It can carry loads of up to 5 tonnes and position them at any location inside the vacuum vessel to better than 0.5 mm accuracy. Two of these manipulators are planned. The through-port transfer system will transport four categories of in-vessel components through any regular equatorial port with a gantry-crane-style carrying system. Once in the vacuum vessel, the components will be 'picked up' by the in-vessel tower crane. Finally, two electric cherry pickers sit on a custom base that can travel on the rails of the in-vessel tower crane, each carrying two technicians and their equipment for finalization operations. 'Technically, I can say that our partners have performed really well,' says Oldfield. 'We really appreciate the solution developed by CNIM for personnel access: to use standard cherry pickers adapted to run on the same bottom rails as the in-vessel tower crane—this is a solution we had not envisaged and it will offer our installation teams a lot of versatility, carrying them all over the chamber. It has also been really impressive to see how only two workers can carry out most component installation operations using the remote box. The tools are so effective that the process of transferring a component from the port cell to its final position on the vacuum vessel wall will not be a bottleneck in the overall in-vessel component assembly schedule.' Tests have now concluded in La Seyne, but the test facility will have a second life—it will be dismantled and delivered to ITER along with all tools and mockups. Re-assembled at ITER, it will serve as a facility for technician training facility and for the development and testing of in-vessel component assembly procedures. Watch a video of the January tests at CNIM Systèmes Industriels here.

360° image of the week | The assembly theatre 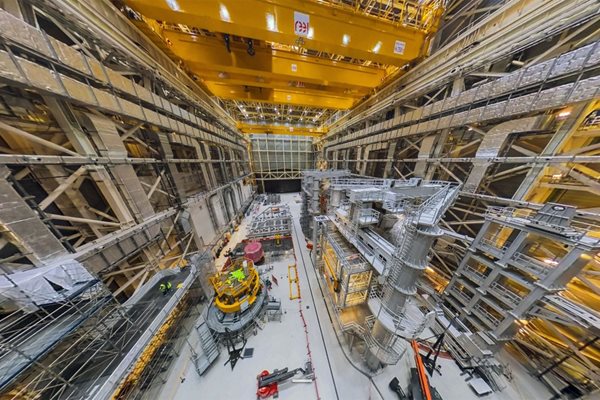 Ever since it was invented almost two centuries ago, photography has tried to capture what the human eye actually sees. Despite huge progress achieved, it has never completely succeeded: human vision is not only a matter of optics but also of a complex process of visual data processing that balances light, straightens perspective and, thanks to binocular vision, enables the perception of distance and volume. However, there is one area in which photography has improved on nature. The digital age has brought techniques that can simulate a field of vision much wider than that of the human eye—combined with virtual reality (VR) tools, '360° capture' now allows viewers to explore a scene not only from a wider perspective but also from multiple angles. 360° shots such as the one Newsline is featuring today provide a unique way to experience the ITER building site. Vast and often equipment-packed, an environment like ITER cannot be captured through a single image or even a panoramic shot. This image, produced by ITER contractor Emmanuel Riche, enables the viewer to stand (virtually) on top of the wall that separates the Assembly Hall from the Tokamak pit and to understand how the two spaces connect. By moving the computer mouse up, down, right or left and rolling the scroll wheel backward or forward, the viewer can take in the 'assembly theatre' in its totality. Improved and refined by Riche, the 360° degree photography/VR technique provides an even more striking experience when viewed with a virtual reality headset. (If you have one, click on the third icon from the right at the bottom of the screen in the link below and the split image will morph into 3D). The ITER Newsline will publish 360° 'images of the week' on a regular basis, showcasing different areas of the worksite.  Click here to view a 360° image of the assembly theatre.

The Financial Times on fusion

In Fusion Power: How Close Are We?, Simon Mundy from the Financial Times introduces his viewers to the quest for fusion energy, described as "one of the hottest and most controversial topics within the push for clean energy." Through interviews with scientists, engineers and investors in the United Kingdom, the United States and France—including Director-General Pietro Barabaschi, Head of Science Tim Luce, and Postdoctoral Fellow Valentina Nikolaeva from ITER—Mundy captures the growing enthusiasm for the potential of fusion energy, as national labs reach milestones and investment in the field from both public and private sources is growing. Watch the 28-minute documentary here.

Dennis Whyte: Nuclear Fusion and the Future of Energy

Reaching for the Stars with Nuclear Fusion (video 30'24")

Nuclear fusion's future, according to the woman leading the charge

Lighting up the future with fusion

Energy from fusion: What is the promise? What hurdles remain?

Sandia work at the heart of next generation nuclear reactor

Exploring the Potential of Fusion Energy: What is it and How Can It Help?