Come fly with us! 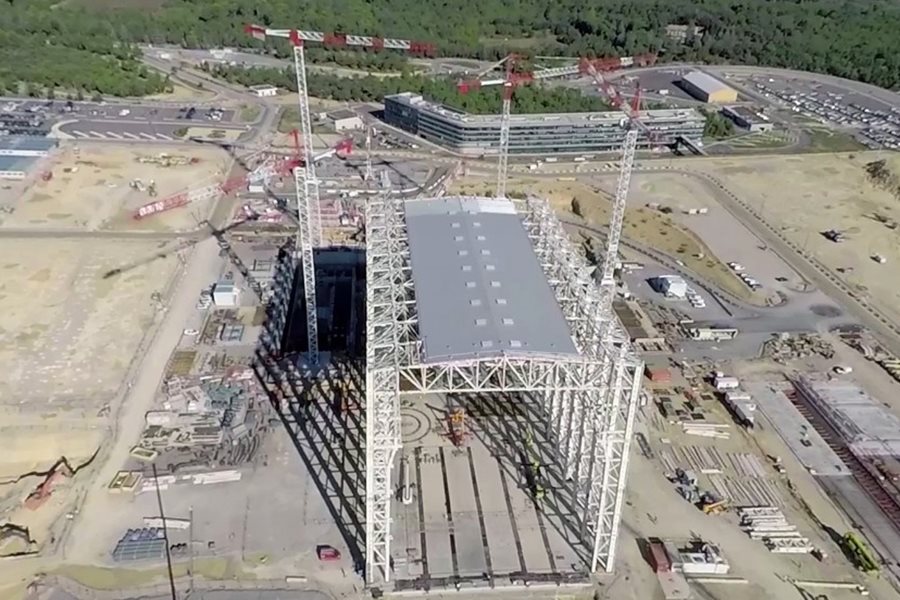 Catching the delicate light of a mid-September day, the 60-metre-high steel structure of the Assembly Hall takes centre stage in a video clip recently released by Architect-Engineer Engage. Filmed by a drone camera flying just a few metres above the building, the clip reveals the complex geometry of the structural beams; catches workers in their telescopic boom work platform tightening some of the structures 85,000 bolts; and, as added benefit, captures a lot of the action taking place elsewhere on the 42-hectare ITER construction platform. Click here to view the video. 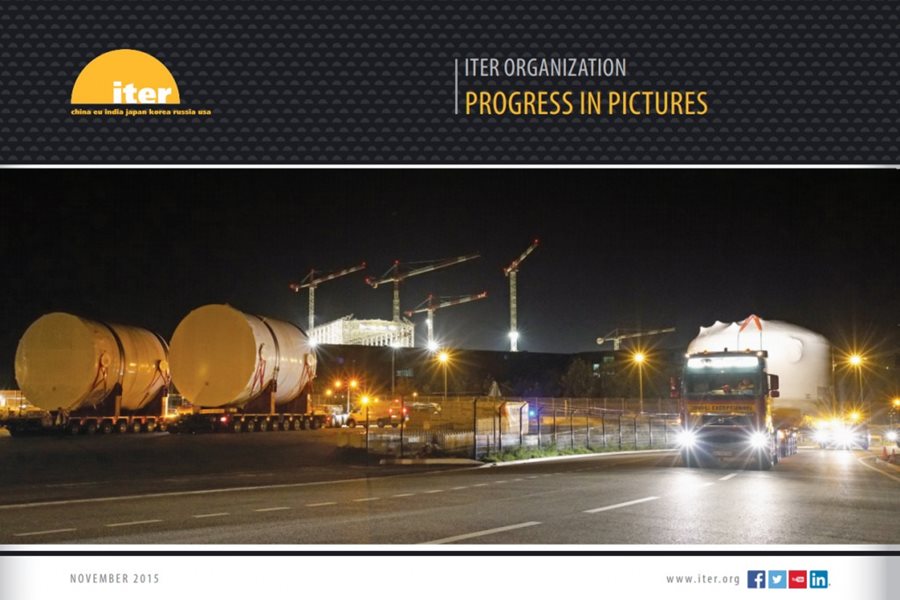 If a picture is worth a thousand words, a fifty-page photo book can tell a lot about ITER. With the project now engaged full speed in construction and manufacturing, the 2015 edition of the Progress in Pictures photo book offers a panoramic view of what is happening on the ITER construction site in Saint-Paul-lez-Durance, France, and in the factories of the project's Members throughout the world. Produced in collaboration with the seven ITER Domestic Agencies, the photo book is renewed annually to document ITER progress. View or download the 2015 edition here.

Testing the thermal tolerance of the fusion reactors of the future

Nuclear fusion is an attractive option for creating sustainable energy, in principle using the same reactions found at the centre of stars to generate large quantities of power without carbon emissions. But creating those conditions on Earth is difficult, and part of the problem is finding the correct materials to contain the fierce reactions. The most common approach is to magnetically contain the high-energy particles, known as a plasma, in a tight circle running through the centre of a giant metal torus. This set-up is employed at the JET facility in Culham, just outside Oxford, as well as in the forthcoming ITER experiment in the south of France. But even constrained by large magnetic fields, the plasma still subjects the walls of the vessel, likely to be made of tungsten, to extreme conditions. Oxford University researchers, along with researchers from the Massachusetts Institute of Technology and the Culham Centre for Fusion Energy, have been carrying out experiments to investigate the effect of radiation on the properties of the material used in the walls and on the materials' thermal conductivity.Read the full article on the PhysOrg website.

After nearly seven years as deputy director for operations at the US Department of Energy's (DOE) Princeton Plasma Physics Laboratory (PPPL), Adam Cohen has been named Deputy Under Secretary for Science and Energy in Washington D.C. He succeeds Michael Knotek, who retired 30 September. 'I am very excited and humbled by the opportunity to take on this role,' Cohen said. 'I look forward to working with Secretary [Ernest] Moniz, Under Secretary [Lynn] Orr and all within the department, as well as across the complex, in supporting the research mission of the department and helping to ensure the vitality of the national laboratories.' Cohen's contributions to the Laboratory have been invaluable, said A.J. Stewart Smith, Princeton University vice-president for PPPL. 'He evolved the management structure that we all enjoy today,' Smith said. 'He has been a superb colleague and will be sorely missed.' At PPPL, which recently completed construction of the $94 million National Spherical Torus Experiment-Upgrade, the Laboratory's major fusion experiment, Cohen has played many critical roles. As deputy director for operations, he was in charge of the upgrade and ran the indirect — or non-research — side of the Laboratory, whose departments range from engineering and infrastructure to information technology. He recently headed preparation of the Campus Plan, a 10-year program for modernizing the Laboratory whose first steps are under way, and set the Lab on its current path to a business system upgrade that will replace all financial software by 2018. Cohen will make use of his fusion experience by heading the U.S. delegation to ITER, the international fusion experiment that is under construction in France. His contact with ITER will be at the international level; he will not be directly involved in the US ITER Project Office at Oak Ridge National Laboratory. Read the full article on PPPL website.

A new video clip produced by the European Domestic Agency revisits the installation of first four on-site transformers. A total power of 1200 MVA will be made available to the ITER installation through two networks—the pulsed power electrical network (PPEN) that services the AC/DC converters, the heating and current drive systems, and the system for reactive power compensation, and the steady state electrical network (SSEN) which will provide power to the cryogenic and cooling water systems, the tritium plant and general infrastructure. Four of seven transformers have been installed on the ITER site. Watch the clip on the European Domestic agency website.