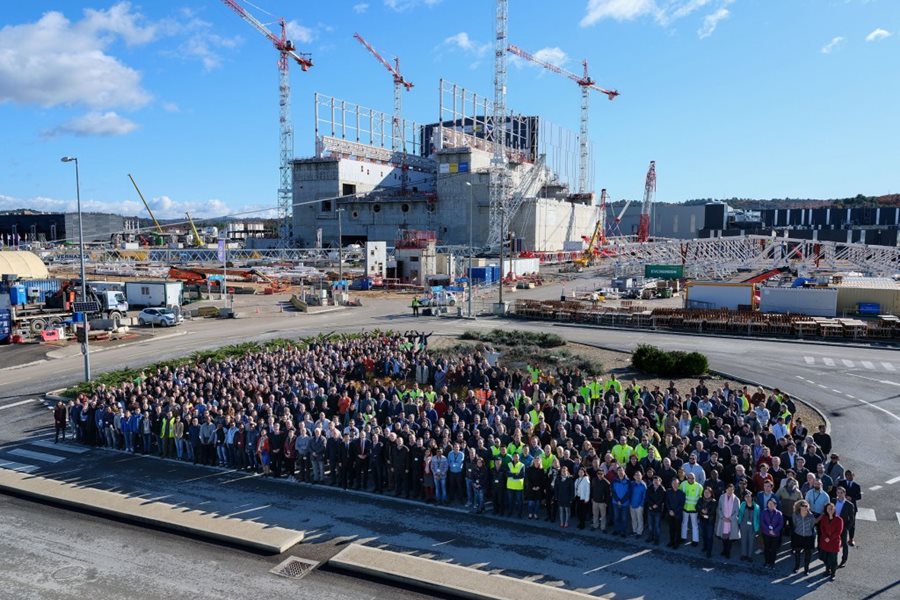 Given the breadth of assignments, schedules, and responsibilities it is impossible to capture a complete snapshot of ITER Organization staff at any given point in time. But on Friday 29 November, many of the 925 people currently employed under direct contract were able to gather in one of the few empty spaces left on the ITER platform for a traditional group picture. The sun was shining, the temperatures were mild for late November, and the backdrop was spectacular. The men and women standing at the entrance to the construction site represent a staff body that hails from 35 different countries. From the latest published Social Report (2018) we know that the average age is 44; that 54 percent of the ITER men and women hold a Master's or engineering degree; and that close to 20 percent are PhDs. Three out of four ITER staff members are married or in a legal partnership; 72 percent have a least one child. Global turnover in 2018 was 5.9 percent. The distribution by Member in November 2019 is as follows: China 9.3 percent; Europe 68.3 percent; India 3.2 percent; Japan 3.5 percent; Korea 5.2 percent; Russia 5 percent; and the United States 5.5 percent (figures updated for 2019). And of course the ITER family is much larger than the staff category alone. At the ITER Organization in France, approximately 500 contractors contribute to the ITER Project along with approximately 150 interim staff, experts, visiting researchers and interns. ITER Project Associates—a non-staff employment program that permits institutes from the ITER Members to assign employees on technical as well as support activities to the ITER Organization—swell employment statistics by another 157 people (figure as of 30 November 2019). The last ITER staff photo was taken in 2017. You can download the 2018 ITER Organization Social Report here. 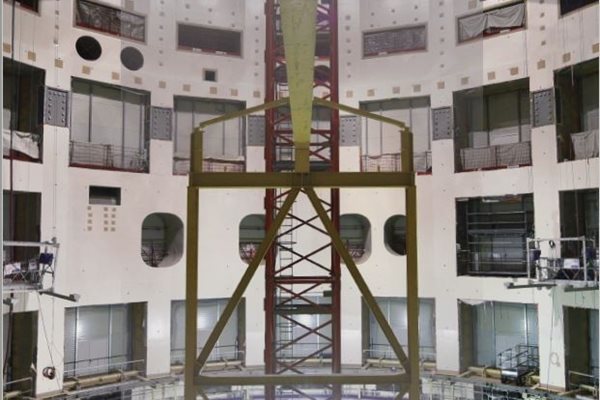 The seventh recruitment campaign for the Monaco-ITER postdoctoral fellowship program opens on 13 January. Since 2008, thirty postdocs have carried out original programs of fusion-related research at the ITER Organization, mentored and supported by ITER scientists and engineers. The positions are funded by the Principality of Monaco, which signed a Partnership Arrangement with the ITER Organization back in 2008 and renewed its sponsorship in 2018 for ten years. The researchers are recruited at the rhythm of five every two years. Within ITER, research possibilities exist in many areas of fusion science and technology, including: • control technology• plasma-facing materials and components• burning plasma physics• heating and current drive physics and technology• fusion plasma diagnostics• superconducting magnet technology• electrical engineering• mechanical/structural analysis• remote handling• vacuum and plasma fuelling technology• cryogenics• tokamak operations• tritium breeding and tritium handling technology• thermohydraulics The seventh campaign of recruitment opens on 13 January 2020. You can apply if: 1) you are a national of China, the European Union plus Switzerland, India, Japan, Korea, Russia, the United States, or the Principality of Monaco; and 2) your PhD was awarded after 1 January 2017 (or you will have received your PhD before 31 December 2020). The principal motivation of the Research Fellows should be the development of excellence in research in fusion science and technology within the ITER framework. Recognized talent and creativity, together with understanding of the relevance of your research interests to the ITER Project, are required. The application process will be launched through the JOBS page on the ITER website on 13 January 2020. Until that date, you can find all relevant information on the Principality of Monaco/ITER Postdoctoral Fellowships page here. For information about past awardees, see these articles from the ITER Newsline: 2018, 2016, 2014, 2012, 2010, 2008. To advertise the postdoctoral fellowship opportunity at ITER at your institute, download the 2020 poster here.

Electrical network | The waking of the beast 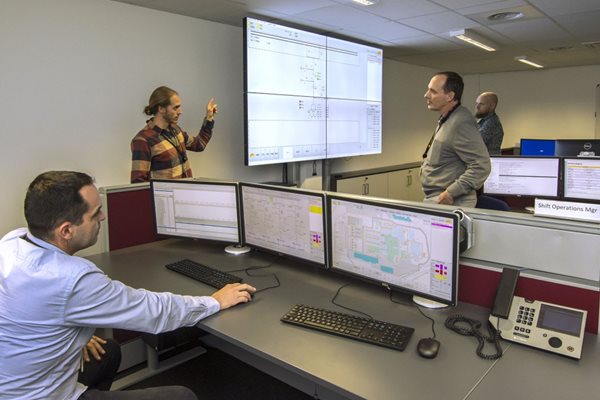 The beast had sat immobile for more than three years—no blood running in its veins, no electrical impulse shaking its nerves alive. With three long horns sticking out of its squat body, it was just waiting for the moment it would be 'energized.' The beast is one of three identical triplets—three massive electrical transformers that connect the 400 kV switchyard to the substations delivering pulsed power to various 'clients' in the ITER installation. Procured by China and installed by Europe, weighing close to 500 tonnes and towering 15 metres above ground, they are the largest electrical components of the project. Not only will they supply the AC-DC converters that feed electricity to the Tokamak's magnetic and heating systems, they will also provide the necessary ultra-short, ultra-powerful impulse required to initiate every plasma shot—the equivalent, for a fraction of a second, of the electrical consumption of a mid-size town. On the morning of Tuesday 26 November, it was time to wake up the first of the triplets. The connection of such a powerful transformer to the grid, or 'energization,' is a delicate operation that requires close collaboration between 'electricians' and control-command specialists at ITER, and operators at the French power transportation authority RTE (Réseau de Transport d'Électricité) in their dispatching centre in Marseille. 'The transformer's energization is the last step in the validation process of not only the component itself but also of its interface with the French grid,' explains Joël Hourtoule, head of ITER's Electrical Power Distribution Section. 'For RTE, the pulse-power transformer is a new client and, at 300 MW, a very powerful one. Allowing it into the grid requires rigorous procedures and a whole set of precautions.' One by one, for more than a month, hundreds of sensors, activators, electro-mechanical devices and protective systems were tested. By Tuesday morning, the beast was ready to be awakened. In the temporary ITER control room (a vast, nondescript office space where computers already monitor the installation's operational systems), as well as in a building on the ITER platform close to the transformer and at the RTE dispatching centre 80 kilometres away in Marseille, signals and status diagrams flashed on the screens. With a click of a mouse, the ITER operators requested pantographs, mechanical switches and circuit breakers to move into place; in the RTE dispatching centre, operators were carrying out similar actions. Clanging and electrical noises were heard in the switchyard as 400 kV current from the grid began flowing into the transformer's windings. The beast purred with pleasure—it had not felt power since undergoing factory acceptance tests in China in the early months of 2016. The transformer remained on line for approximately one hour, the time required for complete and successful validation. In about one year, it will be connected to the platform's 66 kV and 22 kV substations for a series of tests. In the meantime, the transformer's two siblings will have been energized and tested. Taken together, three mighty triplets from China groomed to light the star in the ITER Tokamak.

Fusion science and technology are complex matters that are difficult to explain to non-specialists. In its fall edition, Fusion in Europe (published by the EUROfusion network) asked a dozen 'fusioneers' to write about the challenges they face in their daily practice. Whether hard-core scientists working in European laboratories and institutions, teachers or PhD students, they all volunteer their time to 'entertain, enthral and educate' the general public. 'How do we teach ten-year-old students a complex topic like fusion?' asks Patricia Raposo-Weinberger, who teaches at Graz International Bilingual School in Graz, Austria. 'For me, the best approaches are experiment and storytelling,' she writes. 'Never underestimate the power of a good, simple and enthusiastic story and its effect on students' interest in physics.' Jack Davies Hare, who currently works as a postdoctoral researcher at the Max Planck Institute of Plasma Physics in Garching, Germany, summarizes the challenges of 'surviving the maelstrom inside ITER' in a striking manner. He too begins with a question: 'How do you build something that can survive for twenty years in the harshest conditions ever created on Earth, with no chance of replacement or repair, and with no test facility to replicate this environment?' Like Patricia and Jack, the contributors to this 'fusion writers edition' of Fusion in Europe share a common passion to communicate not only their enthusiasm but also their awe at what they uncover when exploring the bewildering world of fusion. The 'fusion writers edition' of Fusion in Europe can be downloaded here.

China's "artificial sun" device set to be commissioned in 2020

Q&A: UKAEA Directors on the UK's quest to lead on nuclear fusion