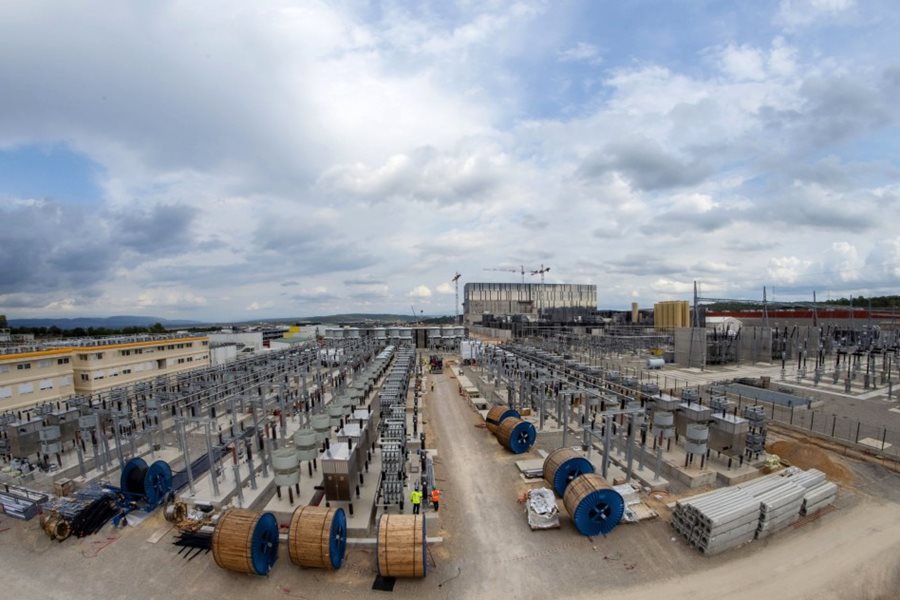 Operating the ITER magnetic system requires the same kind of current that batteries deliver to flashlights, laptop computers and smartphones. This current, which flows in one direction only, is called 'direct current' (DC), as opposed to the 'alternating current' (AC) that powers most appliances and industrial machines. The behaviour of the AC current can be represented by a sine wave, also called a sinusoid, and it is very important that this wave remain regular. The problem is: the conversion process from AC to DC 'pollutes' the AC current and disturbs its distribution. It is therefore imperative that operators, for the sake of their own equipment and for preserving the quality of distribution throughout the grid, implement corrective actions to protect the regularity of the AC current's sine wave. In most heavy industry zones, such as steelworks or shipyards, the equipment for 'reducing the harmonic distortion' in the AC current fits into a medium-size building. In ITER, which requires up to 500 MW of DC power, it occupies not only a building—the Reactive Power Control Building—but also the adjacent one-hectare 'reactive power compensators area.' What happens within this dense arrangement of thyristor-controlled valves*, reactors, capacitors, resistors and sensors is a complex process aimed at smoothing the flow of AC current both inside the ITER installation and in the immediate vicinity—namely the neighboring CEA-Cadarache research centre and the villages closest to the ITER site. The process is about compensating the 'reactive power' that is generated in the AC current by the presence of 'charges,' such as the AC/DC converters in the ITER Magnet Power Conversion Buildings. Contrary to 'active power,' which lights lamps and operates machines, this ghost-like current does not perform any useful work—it simply moves back and forth within the AC flow. Any AC/DC conversion installation tends to intensify the reactive power in the AC network and to create harmonic distortions in the sine wave. Because the equipment inside the ITER Magnet Power Conversion Buildings is exceptionally powerful, the distortions, if not compensated, would deeply affect the local distribution of AC current. It could also be quite costly in terms of electricity bills: transporting the useless reactive power has a cost, which the utility provider would end up billing the customer for. In this perspective, the construction of an efficient reactive power compensation system is a sound investment. The ITER reactive power compensation and harmonic filtering system is among the largest in the world. In the Reactive Power Control Building, which hosts nine 3-metre-tall thyristors, equipment installation is now 80 percent complete; in the reactive power compensators area, it has passed the 75 percent mark. Provided by China and manufactured by Rongxin Power Electronic Co. Ltd (RXPE), the equipment is being installed by the Italian Consortium Fincantieri SI and its partner SAET. *Thyristors are powerful electronic switch controllers. 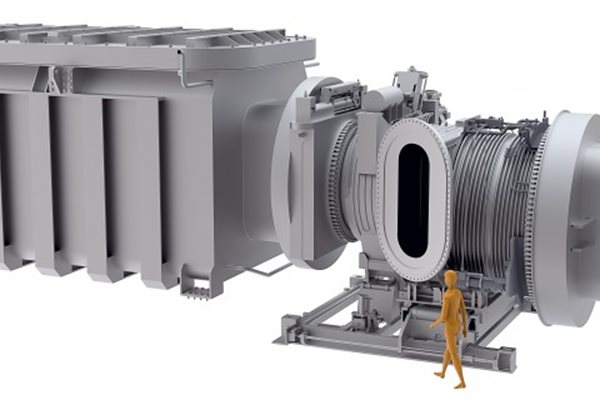 A new Cooperation Agreement provides the legal framework for the EUROfusion consortium to send select experts, scientists and engineers to the ITER Neutral Beam Test Facility in Padua, Italy, and—by doing so—support the development of ITER's most powerful external heating system. Two neutral beam injectors on ITER will deliver 33 MW of heating power to the ITER plasma—over half the external heating required. ITER's chosen technology—the acceleration and neutralization of negative deuterium (D-) ions—will be tested and validated through the operation of two testbeds at the Neutral Beam Test Facility (NBTF) in Padua, Italy, where scientists will have the chance to test component design and explore physics and technology issues before installing the system on ITER. The facility's ITER-scale negative ion source, SPIDER, is already functioning; the prototype injector, MITICA, is under construction. Europe has been closely involved in the development of radio-frequency-driven negative ion source technology from the start, and the ITER source is based on a radio-frequency-driven negative ion source that has been evolving over several generations of prototypes at the Max Planck Institute for Plasma Physics (IPP) in Garching, Germany. Under the terms of a Cooperation Agreement signed with the ITER Organization and Consorzio RFX, the European Consortium for the Development of Fusion Energy (EUROfusion) can provide select experts from European labs—up to 14 professionals per year (PPY)—to work on the neutral beam project at ITER's facility in Padua. EUROfusion is also providing 6 PPY to support the development of the half-size negative ion source in Garching (ELISE). For Deirdre Boilson, head of the Heating & Current Drive Division at ITER, EUROfusion has made a strong commitment. 'The NBTF Facility is a necessary step in the realization of the ITER neutral beams, which is a most challenging endeavour. The injector components are technology intensive, with demanding requirements and first-of-a-kind performance. Full-scale prototype experiments are a must prior to implementation on ITER. We welcome the support of our European colleagues and experts in developing and operating the ITER facility.' The NBTF test facility has been a collaborative endeavour from the start, built through the support of the ITER Organization; the Italian government (test centre site, buildings, auxiliaries and power); Europe (all test bed mechanical components including beam sources and accelerators); Japan (high voltage components for the full-scale injector); and India (acceleration grid power supply for the ion source). Consorzio RFX, the host lab, is providing a large contribution to expertise. Last year, the ITER Organization and Consorzio RFX concluded an agreement for the construction and operation of the ITER Neutral Beam Test Facility through the testing of prototype components—as well as later, when the facility serves as a testbed for ongoing performance enhancement. In that agreement, Article 45 provides for the invitation of 'other entities in a position to further the mission and objectives of the NBTF project [...]' ITER Director-General Bernard Bigot welcomed the news. 'I am confident that with this new agreement and the enlarged team, we will achieve the desired objectives of SPIDER and MITICA and continue to reap the benefits of this type of collaboration, which draws upon the best of global expertise.' Read more about the ITER Neutral Beam Test Facility here. See an announcement by EUROfusion here.

In memory of David Swain

The international fusion community lost a major contributor when Dr. David Swain passed away last month. His contributions to the advancement of experimental and theoretical plasma physics and technology spanned more than half a century during which he produced over 150 scientific papers. For much of his career, Swain's research focused on confining and heating high density plasmas, largely with high power radiowaves. He received his PhD in Physics from the Massachusetts Institute of Technology in 1969, after receiving a Bachelor of Science from North Carolina State University in 1963. He became a Fellow of the American Physical Society in 1985. His professional career began in 1969 at Sandia Laboratories; in 1975, he joined Oak Ridge National Laboratory as a member of the ORMAK tokamak team. He played a leading role in radiofrequency development activities for TFTR at Princeton Plasma Physics Laboratory and Tore Supra in France, plus other ion cyclotron systems for devices around the world including NSTX and KSTAR. Swain was also an early and critical member of the international team that designed ITER's ion cyclotron heating system. He retired from ORNL in 2017, but continued to contribute as a consultant, helping US ITER and the ITER Organization. In his professional and personal life, Swain possessed a generosity of spirit, good-natured friendliness, and a dry sense of humour that made it a pleasure to work and travel with him. His folksy sayings, rooted in his rural North Carolina upbringing, were legendary. The global ITER community will miss his character and his contributions. -- US ITER and the ITER Organization

Educational model of Tokamak by ITER

Validating the physics behind the new MIT-designed fusion experiment