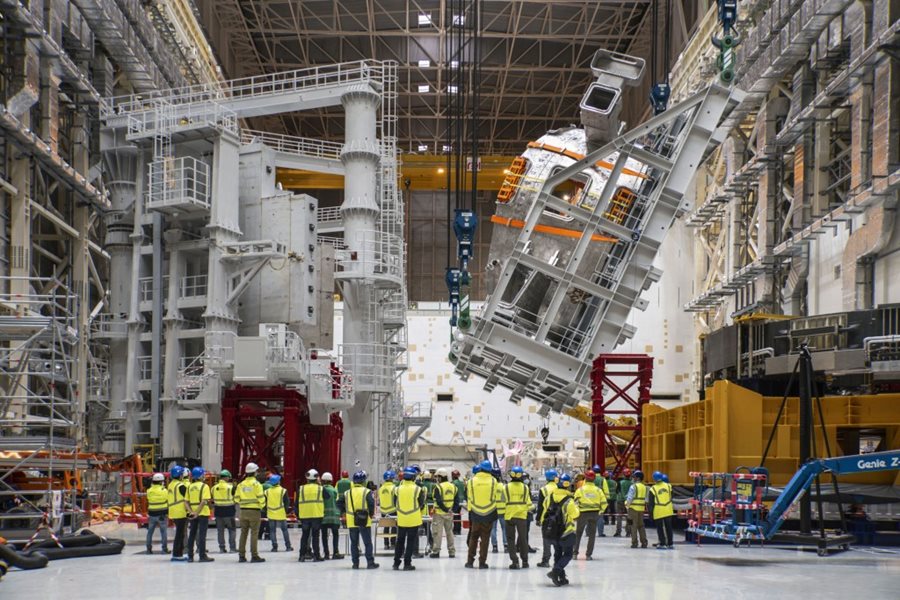 Ever since ITER entered the machine assembly phase, some ten months ago, we have been treated to a few spectacular lifting operations. In May 2020, we watched the cryostat base hover overhead like a flying saucer. In August 2020, the lifting of the cryostat lower cylinder seemed like another scene out of a science fiction movie. And earlier this year, there was magic in the air when the frail, silver-plated thermal shield slowly cruised through the hall, its mirror-like surface reflecting all the colours, lights and distorted shapes of the environment. Since Friday 26 March, another successful lift can be added to the list: the upending of the first vacuum vessel sector. Unlike the previous operations, the distance to travel was short—first a few metres horizontally, then a tilt of the frame mid-air, a lowering back to the ground, and finally a return of a few metres back to the original position. For the first time in its existence, the 440-tonne component procured by Korea, which had required approximately ten years to manufacture, found itself in a vertical position. Among the small crowd of operators, experts and supervisors who watched the operation unfold, one man was particularly moved. Chang Ho Choi, the head of ITER Sector Modules Delivery & Assembly Division, remembered seeing workers cutting the steel plates for the first segments of vacuum vessel sector #6, in July 2011 at Hyundai Heavy Industries in Ulsan, Korea. 'And now this big baby is standing up at last ...' The 'big baby' is a unique piece of high technology, a first-of-a-kind component if there ever was one. The first-of-series will be followed by eight other similar components (5 procured by Europe and 3 by Korea), to form the torus that will enclose the burning plasma—a steel container for a human-made star. Drastic quality and schedule requirements were imposed throughout the fabrication process. 'As the vacuum vessel forms the first confinement barrier of the ITER machine, the nuclear safety aspect is paramount,' says Chang Ho. 'Every weld—and there are 1.4 kilometres of them in one single sector—has to be checked by radiography and phase array ultrasonic testing.' Once delivered to ITER in August of last year, this unique industrial object was leak-tested by the ITER vacuum team and equipped with several hundred 'bosses' to support the vast array of sensing devices that monitor the main electromagnetic parameters of the plasma. Here again, procedures were particularly strict and controlled by nuclear safety, quality and third-party nuclear inspectors. For the tilt operation from horizontal to vertical, a very special cradle was devised. Weighing approximately 200 tonnes, the elements for the upending tool were delivered by Korea in late 2019, assembled with utmost precision, and tested with dummy loads weighing as much as a vacuum vessel sector. All in all, preparation and rehearsals for last Friday's spectacular upending lasted almost one year. 'Succeeding in this kind of complex operation is only possible if you plan, prepare and anticipate,' explained ITER Tokamak Assembly Coordinator Robert Shaw. 'It worked like a charm. We succeeded in one of the most delicate operations of the whole assembly process,' added Alex Martin, head of the Vacuum Vessel Section as the massive component, now vertical, slowly touched down and settled into its waiting position. The wait will not be long: within one week, if all goes as planned, vacuum vessel sector #6 will be placed on one of the twin sector sub-assembly tools to form the core of the first sub-assembly*.  *In ITER parlance, a 'sector sub-assembly' is formed from one vacuum vessel sector, two toroidal field coils, and vacuum vessel thermal shielding. Once completed this sub-unit, weighing 1,200 tonnes, will be lowered into the assembly pit to be welded to other sector sub-assemblies. Click here to view a time-lapse video of the upending operation. 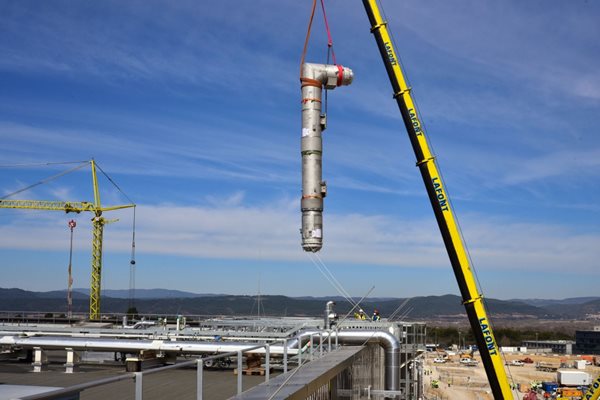 Cooling fluids for the machine's magnets, thermal shield and cryopumps will travel to the Tokamak Building through a set of large multi-process pipes (cryolines) originating in the cryoplant. On Thursday 25 March, the first two cryoline spools connecting the cryoplant to the Tokamak Building were put in place through an opening in the building's roof. The cryoplant is a congested place and moving the spools from their preassembly location inside the building to their final destination nearby was impossible. In order to be installed, the equipment needed to be removed out the door and brought back in through the roof. Cryolines are not just pipes. Their innards comprise sensitive components, such as epoxy supports, that can only tolerate a certain level of acceleration during transport and lift. As a consequence, the operation on Thursday felt like an exercise in slow-motion, with operators checking the shock-recorder signals at every stage of the move. The first component to go out and in again was a 12-metre-long, 1-metre-in-diameter, 6-tonne spool tasked with delivering helium at 4.7K (minus 269 °C) to the magnets. The second, slightly shorter, thinner and lighter cryoline is destined for the cryopumps, also cooled in the same temperature range. Procured by India, both spools were manufactured by Air Liquide Advanced Technologies near Grenoble, France. Delivered in December 2020, they went through a lengthy process of interconnection welding, radiologic testing, helium leak tests, multi-layer insulation wrapping and outer vacuum jacket closure. The two spools are the first elements of the future link between the cryoplant and the Tokamak Building. Vertically connected to the plant's termination cold box, which acts as a dispatcher for the cooling fluids, they bend at a 90° angle when they reach the roof in order to align with the future bridge that will span the distance between the two buildings. The lifting of the two cryolines spools was perhaps not the most spectacular of the week (see here). But it was a complex and delicate operation that was perfectly executed by the Endel Cryolines Consortium, ORYS, CRYO DIFFUSION and crane operator Lafont.

Image of the week | Next in line 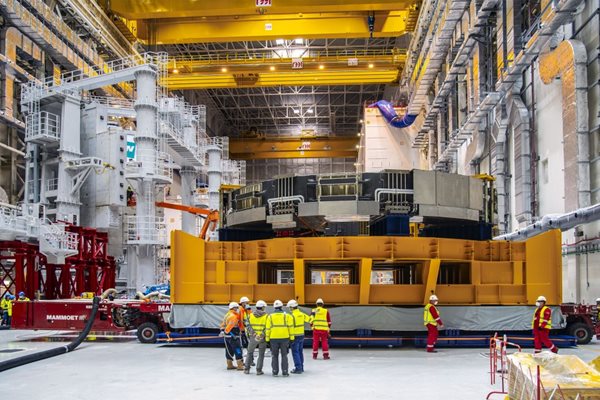 Of six ring-shaped coils required for the ITER Tokamak, poloidal field coil #6 (PF6) is the heaviest (400 tonnes) and the second smallest, with a diameter of 10 metres. On Friday 26 March, the massive component was moved into the Assembly Hall where it will remain for a few weeks, before being lowered into the assembly pit. The coil will be placed on temporary supports at the bottom of the pit until completion of the vacuum vessel assembly, and then moved to its permanent position at the bottom of the machine.

Assembly tools | Strong base for a very heavy task 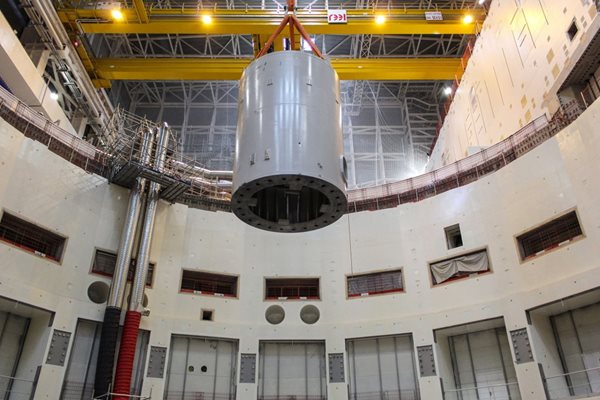 The first part of the in-pit assembly tool has been installed in the Tokamak pit. When complete, the tool will stand more than 20 metres high and branch out in nine directions to support the sectors of the vacuum chamber as they are welded together. The same week that vacuum vessel sector #6 was "upended" to vertical in the ITER Assembly Hall, the bottom cylinder of the principal in-pit assembly tool was lowered and anchored onto the basemat of the Tokamak pit. The two operations are related. The vertical sector will now be transported a few metres and installed on one of the V-shaped assembly tools, where it will be "sub-assembled" with two vertical coils and panels of thermal shielding. The resulting "vacuum vessel sub-assembly," weighing 1,200 tonnes, will then be moved into the pit, where the in-pit column tool will be waiting, ready to support, align, and stabilize the vacuum vessel sub-assemblies as they are joined and welded. The bottom cylinder is the foundation for the in-pit tool, one of five sections that will form its trunk. Like the other parts of the central column, the 70-tonne component is hollow and "reinforced," designed to support all nine sectors of the ITER vacuum vessel during the assembly phase ... including in the case of a seismic event. Large shear keys, bolted and pinned to the concrete basemat at the centre of the assembly pit under the tool, provide resistance against lateral loads and sliding forces. Inside of the column, 'cat ladders' provide access to various levels of the central column, with traps to exit to staging inside of the vacuum vessel. Each vacuum vessel sector will be supported by a radial beam that shares its load between the central column on one side and the concrete bioshield on the other through brackets embedded in the bioshield wall. On Saturday 27 March, the assembly contractors lifted the 5.6-metre-tall component and transported it into the pit. The last few metres were the most delicate, as the bottom cylinder was carefully inserted into the round opening at the bottom of the cryostat base, avoiding the edges. Metrology confirmed that the structure was positioned within 2 millimetres of its nominal position inside of the Tokamak Global Coordinate System (TGCS).

Diagnostics | A stowaway on board toroidal field coil #8 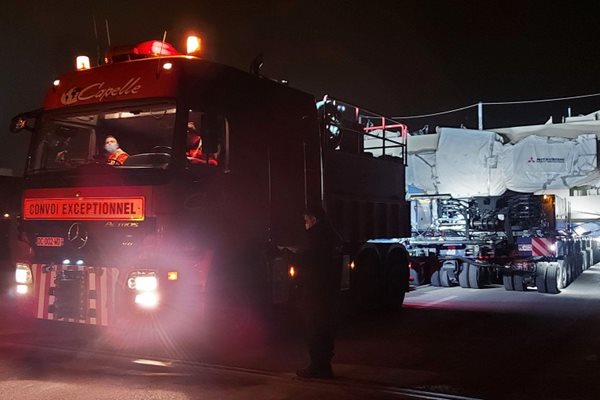 Scientists at the DIII-D National Fusion Facility in San Diego, California, have released a new design for a compact fusion reactor that can generate electricity and help define the technology necessary for commercial fusion power. The approach is based on the 'Advanced Tokamak' concept pioneered by the DIII-D program, which enables a higher-performance, self-sustaining configuration that holds energy more efficiently than in typical pulsed configurations, allowing it to be built at a reduced scale and cost. 'The key to our approach is to raise the pressure inside the tokamak,' said project lead Dr. Richard Buttery. 'This makes more fusion occur, allowing us to reduce the current, which in turn makes the plasma easier to sustain and more stable. Our simulations show that by carefully shaping the plasma and moving the current toward its edge, we can suppress turbulent heat losses and support higher pressures at lower currents, to reach a state where the plasma sustains itself. This enables a device that can simply be turned on, generating electricity continuously in a steady state.' Read the General Atomics press release here.

Inside an ITER vacuum vessel factory

A new video issued by Fusion for Energy, the European Domestic Agency, takes us onto the shop floor at Walter Tosto where three ITER vacuum vessel sectors are in various stages of fabrication. Each 440-tonne sector is formed from four segments, and each segment requires the same step-by-step fabrication route: contractors form and weld the inner shell, attach inner ribs and support housings, install in-wall shielding blocks, and—in the final activity to complete the segments—fit and weld the outer shell. Europe—responsible for delivering five sectors to ITER—is working with the AMW Consortium (Ansaldo Nucleare, Mangiarotti, Walter Tosto) and an extensive network of European subcontractors. At Walter Tosto, in Chieti, Italy, teams are currently finalizing dimension checks on the sub-parts of sector #5, and completing welding on the segments of sectors #4 and #9. Watch the two-minute video here.