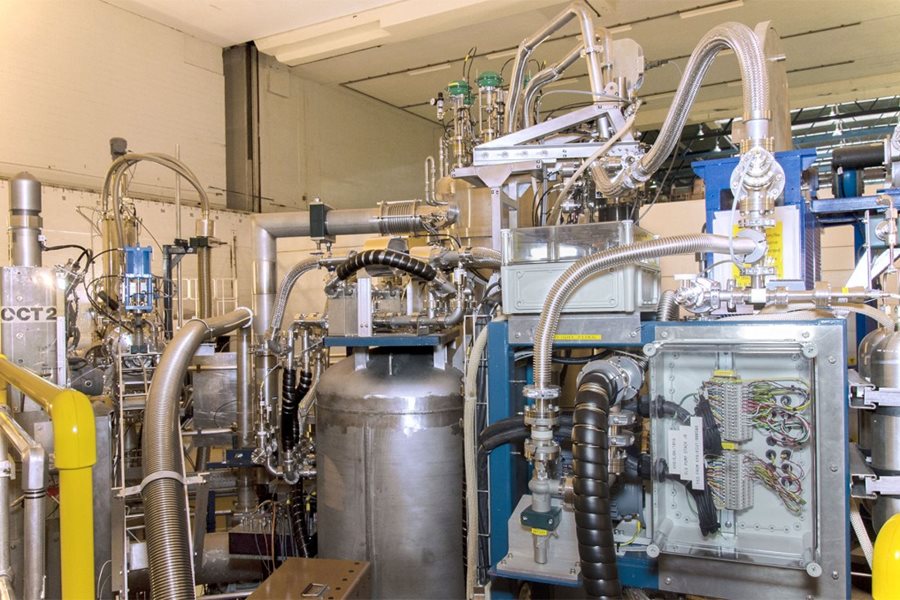 A shattered pellet injector—a device which pre-empts plasma disruptions by releasing a spray of frozen deuterium-neon pellets into a plasma—is now in testing on the world's largest operating tokamak, JET, at the Culham Centre for Fusion Energy in the UK. These tests support the development of the ITER disruption mitigation system. A disruption mitigation system is essential for reliable operations on ITER, which will have a plasma volume over eight times larger than JET's. The frozen pellet fragments rapidly decrease the plasma temperature, thereby dissipating energy and minimizing potential damage to the plasma-facing surfaces of the machine components during a disruption. The pellets travel at speeds up to 250 metres per second—nearly the speed of a jet travelling at altitude (see video courtesy of UKAEA). The shattered pellet injector, which was installed and commissioned on JET over the last few months, is the result of international collaboration between the ITER Organization, EUROfusion, US Department of Energy Fusion Energy Sciences, US ITER, and Oak Ridge National Laboratory (ORNL), with the project being centrally managed by the United Kingdom Atomic Energy Authority (UKAEA). It is one of the most complex systems in use on JET, encompassing a lot of different elements including cryogenics, vacuum, gas manipulation and CODAC according to James Wilson, manager of the project for UKAEA. 'We are very excited to start testing,' said Joe Milnes, the JET Operating Contract Senior Manager for the UKAEA. 'The dedication shown by the project team, working through many nights and weekends to get the shattered pellet injector installed and commissioned, has been vital in getting to this point.' 'The JET Team is completely engaged in this process. They feel a sense of ownership of the ITER program,' agreed Lorne Horton of the JET Exploitation Unit. Shattered pellet injection technology has previously been tested on the DIII-D tokamak at General Atomics in San Diego (US), but using it on JET will yield a more complete picture of what to expect when the device is deployed on ITER. Larry Baylor, a fusion scientist from the Fusion Energy Division of ORNL in Tennessee, is familiar with the technology from when it was first deployed on DIII-D. 'Technically the shattered pellet injector on JET acts as a disruption itself, but in the future, it would be used to pre-empt the disruption. We are testing it on JET because we are trying to scale it to ITER. DIII-D is a much smaller device than JET, and JET is a much smaller one than ITER. So, the purpose is in scaling in terms of plasma size and plasma energy to get closer to what ITER will be,' said Baylor. On JET, the injector is located between octants 1 and 2 on one of the vessel's vertical ports. 'I think one of the main things this new technology will perhaps tell us is the amount of shattered pellet injection material that ITER will require, and whether it needs to be injected from more than one location in the vessel,' said Baylor. The research team is also interested in learning how much neon is required to remove all the thermal energy and how symmetrically the energy is radiated around the torus. Other areas of study down the line will include the dissipation of runaway electrons. Runaways occur when electrons in the plasma are accelerated by a strong electric field around the plasma 'donut' following a disruption. On the other side of the world, a pair of shattered pellet injection devices have been installed on another tokamak—KSTAR in Korea—to explore the effects of multiple pellet sources. This configuration will allow the community to assess how the results from one system scale to multiple, simultaneous injections. A comparison between KSTAR and JET will allow a determination of size scaling for multiple injectors in much the same way as the team is presently comparing the shattered pellet injection results from DIII-D with those now being obtained on JET. See a related news report (plus video) on the website of the Culham Centre for Fusion Energy. Article prepared by US ITER with inputs from the Culham Centre for Fusion Energy, the UK Atomic Energy Authority, EUROfusion, the ITER Organization, and Oak Ridge National Laboratory. 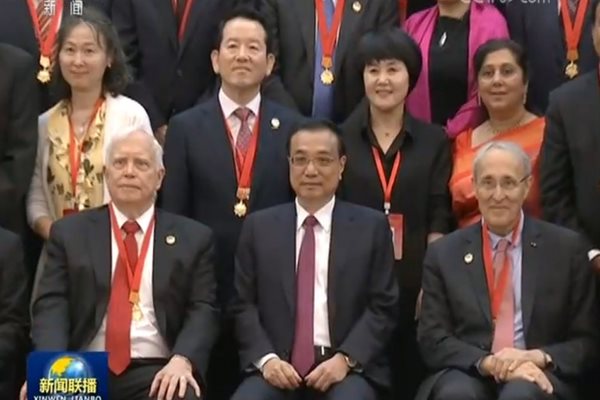 Last week, ITER Director-General Bernard Bigot was one of 100 foreign experts from 31 countries to be awarded the Chinese Government Friendship Award. The Chinese Government Friendship Award is the highest award granted by the People's Republic of China to foreigners who have made 'outstanding contributions to the country's economic and social progress." On 30 September—one day ahead of China's 70th National Day—100 laureates from 31 countries gathered with their families in Beijing's Great Hall of the People. Premier Li Keqiang congratulated the awardees, thanking them for their contributions to 'promoting China's modernization drive, promoting friendly exchanges and mutually beneficial cooperation between China and foreign countries.' The meeting was also attended by vice premiers Han Zheng and Liu He and State Councillor and Foreign Minister Wang Yi. 'In 2018, Chinese parents sent 660,000 of their children to study abroad—and more and more foreign students are also studying in China. This two-way exchange creates a bridge for international cooperation in future decades,' said Director-General Bigot in his acceptance speech. 'It is therefore natural that more and more Chinese scientists and engineers are working in large international projects—including the ITER research project in France which I am proud to lead ...'

Image of the week | 12 pillars and counting 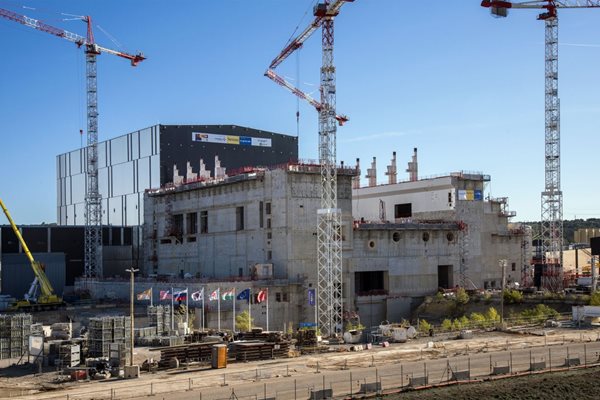 Two rows of pillars have now appeared at the top of the ITER Tokamak Building—12 out of 20 base pillars that will soon be topped by a second level of pillars, and finally the roof structure. The crawler crane enters into action in late afternoon and continues on into the night, carefully lifting the 28-tonne, 13-metre-tall pillars some 45 metres above the platform to be bolted along either side of the Tokamak Building's concrete structure. Two rows of 10 are planned. The lower pillars accommodate shelf-like platforms that will support the crane rails as they are extended out beyond the Assembly Hall; the second pillar segments—16-metre-tall upper pillars—will be installed next. A few hundred metres away, sections of roof frame are being assembled on the ground. A second crawler crane will work in tandem with the first to lift these into place. But for now, nearly every night a new pillar or two can be seen from the windows of the ITER Headquarters Building ... 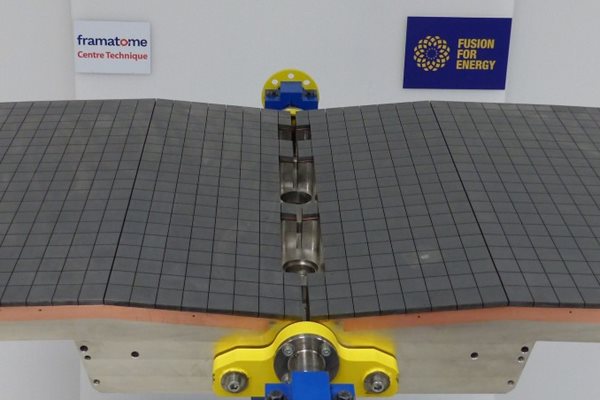 Directly facing the heat and high-energy neutrons produced during fusion is the first wall of the ITER blanket—440 beryllium-coated, detachable panels that will be installed on the inboard and outboard surfaces of the vacuum vessel over a surface of 610 m². The European agency for ITER, Fusion for Energy, has reached the end of its industrial qualification program for the panels that are under its responsibility. The ITER blanket system provides the physical boundary for the plasma and contributes to the thermal and nuclear shielding of the vacuum vessel and the external machine components such as the superconducting magnets operating in the range of 4 Kelvin (-269 °C). Directly facing the ultra-hot plasma and having to cope with large electromagnetic forces, while interacting with major systems and other components, the blanket is among the most critical and technically challenging components in ITER. Each of the 440 plasma-facing first wall panels of the ITER blanket measures 1 x 1.5 metres (height x length), and is coated with a 6- to 10-millimetre layer of beryllium armour tiles bonded to a copper alloy heat sink mounted on a stainless steel structure. Half of the panels are under the procurement responsibility of the European Domestic Agency, Fusion for Energy: 215 normal heat flux first wall panels designed for heat fluxes of up to 2 MW/m². (China and Russia are sharing the procurement of 225 enhanced heat flux panels designed for 4.7 MW/m².) For all parties, first wall design, development and qualification is progressing in phases, including the manufacture and testing of small-scale mockups, followed by semi-prototypes, and finally full-scale prototypes that open the way to series production. In Europe, the last phase of the industrial qualification program is drawing to a close. Contracts awarded for three full-scale prototypes have been executed and quality tests are underway on the results. The choice of awarding the contracts for full-scale prototypes to three companies—Atmostat, Framatome and the consortium Iberdrola/Woods/Leading—was made by the European Domestic Agency to mitigate risk on these technically challenging components and preserve competition up to series production. The next step for the European agency is the call-for-tender for the production of the first wall panels. 'The manufacturing completion of these three full-scale 'normal heat flux' first wall prototypes by the suppliers of the European Domestic Agency is the culmination of many years of effort with strong Domestic Agency/ITER Organization collaboration; it represents a major milestone in our first wall procurement activities,' comments René Raffray, leader of the ITER Blanket Section. 'Congratulations to our colleagues from Fusion for Energy and their suppliers involved in this successful endeavour.' Qualification programs are also advancing in Russia and China, where full-scale prototype programs for the enhanced heat flux panels will be launched in 2020. See the full story, with photos, on the Fusion for Energy website.

Fusion power will be well worth the wait

UK to take a big 'STEP' to fusion electricity