Share Tweet
Disruption mitigation | First tests with JET's shattered pellet injector
A shattered pellet injector—a device which pre-empts plasma disruptions by releasing a spray of frozen deuterium-neon pellets into a plasma—is now in testing on the world's largest operating tokamak, JET, at the Culham Centre for Fusion Energy in the UK. These tests support the development of the ITER disruption mitigation system. 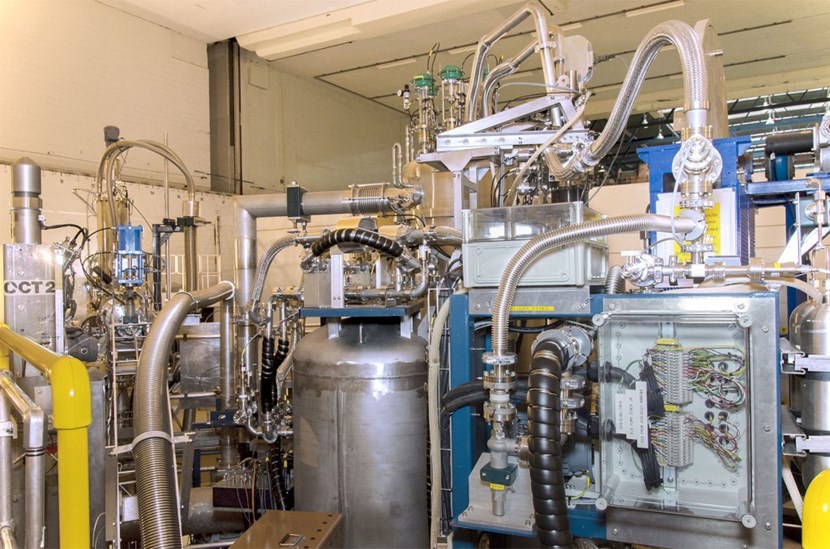 The shattered pellet injector installed on the JET tokamak. Although scientists are still familiarizing themselves with the mechanics of the injector's pellet system, between 20 and 30 were fired in the first days of experiments at the end of July—at a speed of up to 250 metres per second. Photo: EUROfusion
A disruption mitigation system is essential for reliable operations on ITER, which will have a plasma volume over eight times larger than JET's. The frozen pellet fragments rapidly decrease the plasma temperature, thereby dissipating energy and minimizing potential damage to the plasma-facing surfaces of the machine components during a disruption. The pellets travel at speeds up to 250 metres per second—nearly the speed of a jet travelling at altitude (see video courtesy of UKAEA).


The shattered pellet injector, which was installed and commissioned on JET over the last few months, is the result of international collaboration between the ITER Organization, EUROfusion, US Department of Energy Fusion Energy Sciences, US ITER, and Oak Ridge National Laboratory (ORNL), with the project being centrally managed by the United Kingdom Atomic Energy Authority (UKAEA). It is one of the most complex systems in use on JET, encompassing a lot of different elements including cryogenics, vacuum, gas manipulation and CODAC according to James Wilson, manager of the project for UKAEA.


"We are very excited to start testing," said Joe Milnes, the JET Operating Contract Senior Manager for the UKAEA. "The dedication shown by the project team, working through many nights and weekends to get the shattered pellet injector installed and commissioned, has been vital in getting to this point."


"The JET Team is completely engaged in this process.  They feel a sense of ownership of the ITER program," agreed Lorne Horton of the JET Exploitation Unit.


Shattered pellet injection technology has previously been tested on the DIII-D tokamak at General Atomics in San Diego (US), but using it on JET will yield a more complete picture of what to expect when the device is deployed on ITER. Larry Baylor, a fusion scientist from the Fusion Energy Division of ORNL in Tennessee, is familiar with the technology from when it was first deployed on DIII-D. 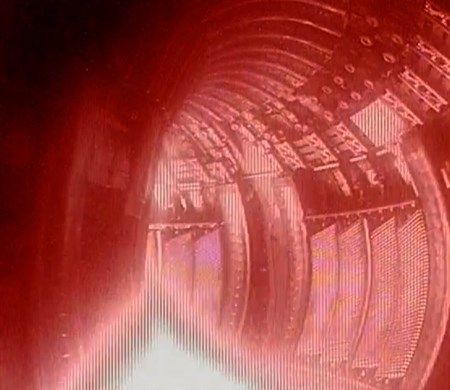 During a disruption, electromagnetic forces, thermal loads, and runaway electrons must be rapidly dissipated to protect the fusion machine. Image: EUROfusion
"Technically the shattered pellet injector on JET acts as a disruption itself, but in the future, it would be used to pre-empt the disruption. We are testing it on JET because we are trying to scale it to ITER. DIII-D is a much smaller device than JET, and JET is a much smaller one than ITER. So, the purpose is in scaling in terms of plasma size and plasma energy to get closer to what ITER will be," said Baylor.


On JET, the injector is located between octants 1 and 2 on one of the vessel's vertical ports.


"I think one of the main things this new technology will perhaps tell us is the amount of shattered pellet injection material that ITER will require, and whether it needs to be injected from more than one location in the vessel," said Baylor.


The research team is also interested in learning how much neon is required to remove all the thermal energy and how symmetrically the energy is radiated around the torus. Other areas of study down the line will include the dissipation of runaway electrons. Runaways occur when electrons in the plasma are accelerated by a strong electric field around the plasma "donut" following a disruption.


On the other side of the world, a pair of shattered pellet injection devices have been installed on another tokamak—KSTAR in Korea—to explore the effects of multiple pellet sources. This configuration will allow the community to assess how the results from one system scale to multiple, simultaneous injections. A comparison between KSTAR and JET will allow a determination of size scaling for multiple injectors in much the same way as the team is presently comparing the shattered pellet injection results from DIII-D with those now being obtained on JET.


See a related news report (plus video) on the website of the Culham Centre for Fusion Energy.


Article prepared by US ITER with inputs from the Culham Centre for Fusion Energy, the UK Atomic Energy Authority, EUROfusion, the ITER Organization, and Oak Ridge National Laboratory.