Cooling system | From river to droplets and mist 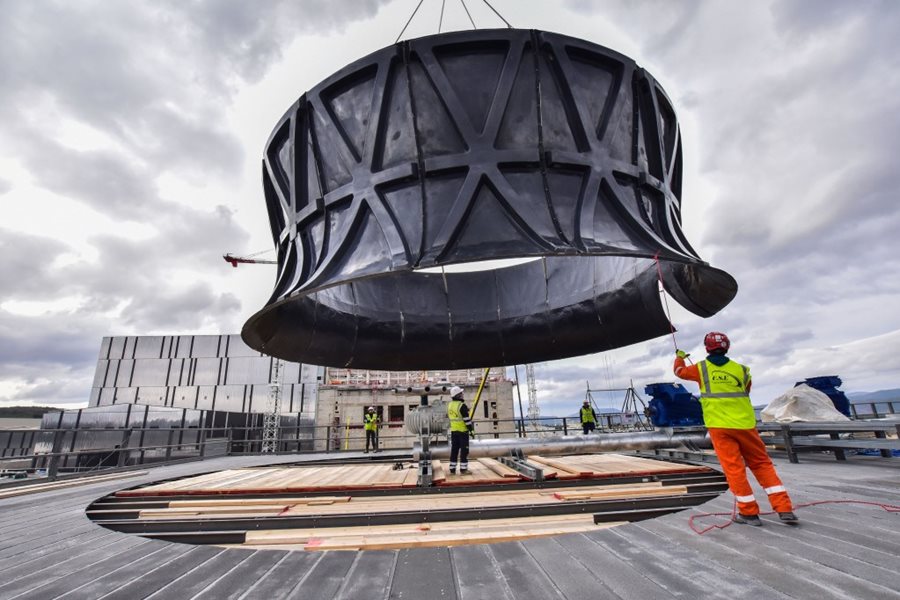 A subterranean river runs through the ITER installation. Rushing through 60 kilometres of piping, passing through dozens of pumps, filters and heat exchangers at a rate of up to 14 cubic metres per second, its flow is more than half that of the nearby Verdon River. This ramified network is tasked with cooling and evacuating the heat generated by ITER operation—one main loop designed for the Tokamak proper, the other for the installation's auxiliary systems.   Cooling this considerable flux of water requires a massive installation based on simple principles: heat exchange, evaporation and re-condensation.   Evaporation cools—we experience it on a daily basis when we step out of the shower. As water molecules transition from liquid to gaseous (vapour), they draw heat from the skin and generate a cold sensation throughout the body. This is one of the principles at work in the ten cooling cells of the heat rejection zone, a 6,000-square-metre facility located at the north end of the ITER platform.   A squat black building accommodates the main feature of the ITER heat rejection system: ten cooling cells that act like the familiar concrete cooling towers of an industrial power plant, whether thermal or nuclear. But whereas the upward airstream that accelerates the evaporation process occurs naturally in a conventional cooling tower, it is induced by large fans in the ITER cooling cells.   The advantages of induced draft cooling towers are size, cost and flexibility: their footprint is much smaller than that of a concrete cooling tower, their construction cost is significantly lower, and their flexibility is well adapted to the intermittent nature of ITER operation.   The efficiency of the cooling process depends of the surface through which the heat is exchanged. Similar to cooling fluid in a car engine passing through the honeycomb structure of the radiator, hot water entering the cooling cells¹ is sprinkled by a set of 4,540 spray nozzles into a stack of corrugated plastic sheets called a 'fill pack.' If unfolded, the total exchange surface provided by the fill pack would be on the order of 704,000 square metres, the equivalent of some 70 football fields.   Efficiency also depends on how long the droplets remain in contact with the fill-pack exchange surface. Left to the natural effect of gravity, the duration of contact would not be sufficient and droplets falling from the spray nozzles would not have enough time to cool to the required temperature. To remedy this, the droplets' fall is slowed by the upward draft induced by the large fan on top of every cell.   This upward draft creates a drag force, however, that could cause the droplets to scatter and be lost. And water—in the ITER heat rejection system like everywhere else—should not be wasted.   The droplets and mist lifted by the draft must be recaptured to bring the 'drift losses' to an acceptable level. Thousands of 'drift eliminator' units at the top of each cell, above the spray nozzles and the 1.6-metre-thick stacked fill pack, provide a dense, zigzagging labyrinth (see photo) that causes droplets to change direction, lose velocity and fall back into the cooling tower, significantly reducing the drift losses.   At the end of the process the water, now considerably cooler than when it entered the cells (27 °C), falls into the cold basin under the towers. From there, it is transported by huge vertical pumps to the different heat exchangers of the system, where it goes back to cooling the plant systems and the Tokamak secondary loop.   And the cycle repeats itself endlessly, extracting and rejecting the massive quantity of heat generated by the tokamak, its auxiliaries and the installation's plant systems. At full power the combined load that needs to be evacuated is of the order of one gigawatt, approximately half of it generated by the heat from the fusion reaction collected by the plasma-facing wall inside the vacuum vessel.   If ITER were an industrial fusion plant, the heat in the plasma-facing wall would be converted into electricity by way of steam generators, turbines and alternators. But as a research installation—with a non-steady-state experimental device—installing electricity-generating equipment would not have made sense.   On the roof of the squat black building that accommodates the cooling cells, seven out of ten funnel-like fan cylinders are in place. The remaining three are being assembled and will be lifted in the coming weeks. Inside the cells, 80 percent of the fill pack units are now stacked together under the spray nozzles, and about half of the 4,000 drift eliminator sheets are glued together and ready to be positioned above the fill packs, under the large fans. ¹ Pumped from the heat rejection system's hot basin (which acts as a heat dump) and from other plant services, the water enters the cooling cells at a temperature of 43 °C. 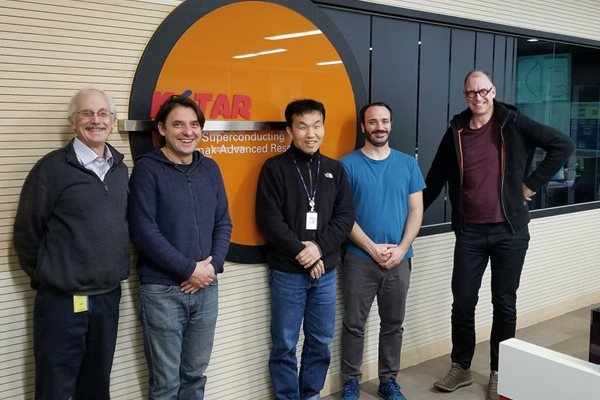 Two weeks ago at the Korean tokamak KSTAR, the technology chosen for disruption mitigation at ITER—shattered pellet injection—was tested for the first time in an ITER-like dual-injection configuration. To lessen the impact of high-energy plasma disruptions that can lead to significant thermal loading of in-vessel components, an international task force is leading an extensive program to validate the design of an effective disruption mitigation system. The design work of the ITER disruption mitigation system is driven by a team of engineers that was formed in 2019 at the ITER Organization, after the responsibility for the system was taken over from the US Domestic Agency. This team continues what has been developed at the Oak Ridge National Laboratory (ORNL) as a voluntary US contribution, progressing the design with high intensity in order to have it ready to integrate into port plug designs by 2022. In parallel, the task force is investing in optimizing key technologies as well as validating the functionality of the design. The first large-scale experimental project of the task force is the KSTAR shattered pellet injector project. ITER's disruption mitigation strategy is based on the injection of cryogenic pellets from different toroidal locations into plasmas that are unstable and will disrupt. This method aims to decrease electromagnetic and thermal loads to machine components. Just before they enter the plasma chamber, these pellets—which have a diameter of 28.5 mm and a length of more than 50 mm—are shattered into small fragments. This concept ensures that the frozen deuterium and neon is ablated and assimilated by the plasma to achieve the high densities that are required for disruption mitigation. The plasma thermal and magnetic energy will be dissipated through radiation rather than leading to large heat loads and electromagnetic forces. With the present design, up to 24 pellets can be fired from three equatorial port plugs into the ITER plasma. The distribution of injection locations aims at keeping the plasma radiation as uniform as possible to avoid melting of the first wall; moreover, injecting from different locations around the torus can also affect how efficiently the injected particles are absorbed by the plasma. In ITER, two of the injection locations are exactly opposite one another—and it is the goal of the KSTAR experiments to test this configuration. In mid-2018 four parties began detailed discussions on how to implement the two shattered pellet injectors on KSTAR: Korea's National Fusion Research Institute, NFRI (the lab operating KSTAR), US ITER through ORNL (the lab providing injector hardware), and the ITER Organization through the Disruption Mitigation System Task Force to coordinate the project and to provide a framework for the scientific exploitation. From the beginning, it was clear that time was limited and the amount of work necessary for installation would be substantial. The motivation and persistence of all parties—the engineers and physicists at KSTAR, who found space on the device despite the fact that most of the access ports were already well occupied with diagnostics and heating systems, and the ORNL team, with its experience in installing and operating shattered pellet injection systems at DIII-D and JET—turned out to be decisive. In a short time, ORNL designed the system that would be needed for KSTAR, NFRI rebuilt two of the large KSTAR ports to accommodate the system's flight tubes, the platform around the tokamak was extended to accommodate the injector hardware, and control cubicles, gas and cryogenic lines were put in place. In August 2019, KSTAR was closed and pumping began in preparation for the experimental campaign. Less than one year after the first contract had been signed, in November, one of the two injectors fired pellets into the KSTAR plasma. Now, two months later, the second injector has entered service. Experiments have been performed to get a first glimpse of how the plasma reacts on dual pellet injection. Diagnosing the plasma with the appropriate equipment is essential for all tokamak experiments, but disruptive plasmas—due to the short timescales of a few milliseconds and the huge dynamic ranges required—are especially challenging and most diagnostics installed on present-day tokamaks are not optimized for such conditions. Through ITER Organization funding, the KSTAR shattered pellet injection team installed several dedicated diagnostics to analyze the effectiveness of the injection: Electron, photon, X-ray (AXUV) diodes inside the vacuum vessel to allow tomographic reconstruction of the radiation in two toroidal locations together with several wide-angle detectors toroidally distributed. These instruments measure the radiated power and especially its spatial distribution during the different phases of the disruption. A dispersion interferometer at a wavelength of 1064 nm with three channels viewing different locations in the plasma. Because the aim of disruption mitigation through shattered pellet injection is to increase the electron density in the plasma by more than a factor 20 during normal operation, resolving such densities requires interferometers that are not compromised by refraction. The initial results of the first dual injection experiments indicate that significantly higher density can be achieved when using two injectors. However, it is also clear that the timing of the arrival of the two pellets is critical—a few milliseconds' delay of one of the pellets can already degrade the mitigation performance. This is a critical aspect for the ITER mitigation strategy since it relies on the injection of several pellets to achieve the required densities. Finally, the observation of the penetration of the ice fragments into the plasma is indispensable for the interpretation of the experiments. For this purpose, KSTAR will be equipped this year with two ultra-fast cameras observing the injection locations, before experiments resume after summer. The KSTAR shattered pellet injection project is one of several experimental activities of the ITER Disruption Mitigation System Task Force, and it complements the JET shattered pellet injection experiments that were made possible through substantial support from the ITER Organization and an international effort of several labs. Such experiments will provide critical information to validate models that will eventually predict the performance of shattered pellet injection in ITER and guide the disruption mitigation design team in taking decisions.

Image of the week | How quickly it goes! 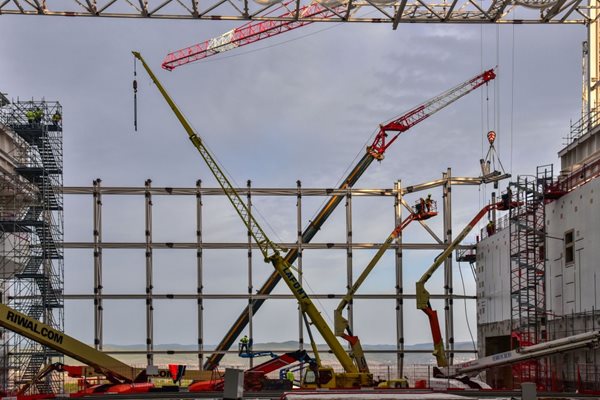 There are many challenges in communicating ITER and one is to keep pace (from a visual point of view) with the progress of the Tokamak Building. Since this picture was taken, on Thursday 23 January, the lattice being constructed to close up the end of the crane hall structure has almost reached the top; it should be completed by 1 February. A first layer of cladding now covers one side of the structure, and 15 percent of insulation and final cladding is now affixed to the beams. Roofing is nearly half in place, and the rails for the overhead cranes are in position on both sides of the hall. Next time we train the camera on the crane hall, the view will have changed again. And despite all our efforts, the photograph will probably be a few hours late... 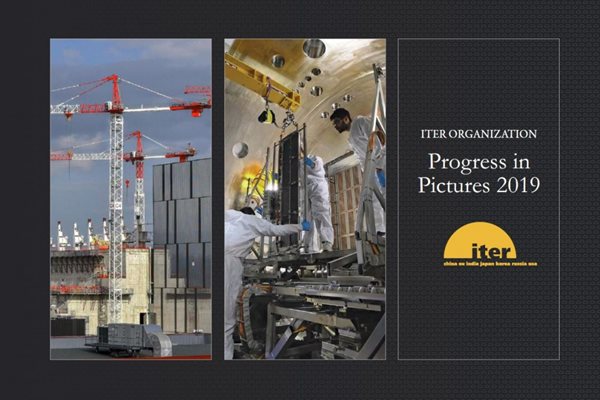 Weaving a Way to Fusion Energy

A history of fusion research and development Part 5