Ballet in the sky 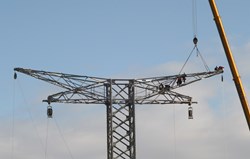 The spectacular aerial ballet will continue in the coming weeks as 12 identical pylons are erected and assembled along the six kilometres that separate the ITER platform from the 400 kV power line.
For ITER, European Domestic Agency F4E or ENGAGE staff with an office facing the platform, the spectacular show continued last week as specialists from the German company GS-Energy finalized the installation of the 120-tonne pylon that will hold the power cables for ITER's four-hectare switchyard.


Over two days this week, the four pre-assembled "arms" of the pylon, of which the largest weigh 16 tonnes, were hoisted one by one to the frame and bolted by a team of eight specialists in "acrobatic works."


Assembling a pylon requires some five tons of individual bolts. Once each bolt is properly tightened, it is "clipped" by way of hammer and awl in order to prevent it from unscrewing.


The spectacular aerial ballet will continue in the coming weeks as 12 identical pylons are erected and assembled along the six kilometres that separate the ITER platform from the existing 400 kV power line.


Next week, workers will pass "pulling cables," which are much thinner and lighter than power cables, through the temporary pulleys that can be seen hanging from the pylons' arms. Once these pulling cables are in place for at least two pylons, they will be attached to the power cables. Powerful truck-mounted winches will pull the power cables into place and pulleys will then be replaced by glass insulators. 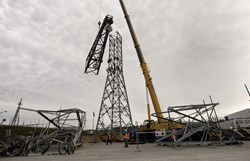 One by one, the four pre-assembled ''arms'' of the pylon were hoisted to the frame and bolted by a team of eight specialists in acrobatic works.
Each pylon will support two power cables, each consisting of three "phase cables", plus two "lightning protection" cables. All cables are four-centimetres in diameter and are made of an aluminium alloy that is lighter, and cheaper, than copper.


A true reflection of the ITER project, pylon assembly is an international operation: most of GS-Energy's acrobatic works specialists are Lithuanian and communicate with their foreman in German. When the acrobats are at the top of the tower, some 40 metres above ground, they rely on the foreman's French skills to formulate their needs to the crane operator...