Ready to face the biggest challenge of his life 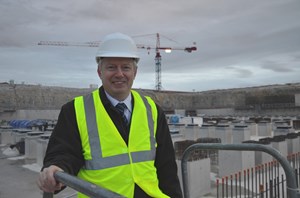 Taking a look at the big hole that will hold the machine: Alexander Alekseev, the new head of the Directorate for Tokamak.
His desk is empty: no documents cover its surface, just a computer. The office has the ambiance of an apartment where the former resident just moved out and the boxes with the personal belongings of the next have not yet arrived. The only visible sign that there's a new occupant in Office 138, Building 519 is the large picture towering over the meeting table—a pictogram, to be precise—made up of many hundreds of small photos. It shows Peter the Great, which comes as no surprise as Alexander Alekseev is from Saint Petersburg, Russia.


It is mid-December 2011 and Alexander Alekseev, the newly appointed head of the ITER Tokamak Directorate, is settling into his new job—"the biggest challenge of my life," he bluntly states. Although dealing with administrative issues and trying to find his way around this big international enterprise called ITER has occupied his first weeks here, he knows that time allowed for adjustment is short. "The ITER train is rolling with high speed and I have to jump onto it."


Alexander is by no means a newcomer to the ITER world. In fact he has dedicated all of his professional life to the project, approaching it from many different angles. He first encountered fusion in 1986 when his professor at the Leningrad Technical Institute proposed a thesis topic on the thermal-mechanical analysis of superconductors under quench conditions. For this, Alexander went to work at the Efremov Institute (he would later return, making contributions to engineering aspects of various fusion devices such as T-15, Globus-M, KTM, KSTAR, W7-X and T-15MD). "These were difficult times due to Perestroika," Alexander remembers. "Money was scarce and it was hard to defend our research budget. I guess the only reason we survived is because of the Russian involvement in the ITER Project."


Alexander knows the ITER machine from inside out, as he and his team at the Efremov Institute have made valuable contributions to the design and analysis of the magnet structure and the thermal shielding. They were also engaged in the thermo-hydraulic analysis of the ITER magnet system during the machine's cool-down and operational phase; the analysis of its cryolines and power supply systems; and the effect of increased stress loads on the poloidal and toroidal field coils due to exceptional current events. Thus there are not many screws and bolts on the ITER machine that Alexander isn't familiar with.


But still, running one of the biggest and certainly one of the key directorates within the ITER Organization remains a huge challenge. Talking about how he plans to tackle this task he uses terms like "adjustment" and "adaptation" rather that bold expressions such as "revolution." "We Russians," he says, smiling jovially, "we have some experience with revolutions. They usually result in a long period of recovery ..."


As an engineer, Alexander wants to focus on the "real-life aspects" of building the ITER machine, for example "improving the hand-over to industry." And he will have to draw a line for design activities. "We have to stop optimizing or ITER will never be built."


In his free time Alexander loves to play badminton and to ski. Driving to work from Aix-en-Provence in the morning and seeing the fresh snow on the mountains on the horizon fills him with anticipation. The vocabulary to describe all that he sees in French, he hopes, will be part of a later chapter, as he is eager to learn. "Language is part of a country's culture and I am curious to explore. If I find the time..."