A researcher takes an upward view of the interior of NSTX, shown with the centre column. Copyright for all three photos: Princeton Plasma Physics Lab.
The Princeton Plasma Physics Laboratory (PPPL) has received approval from the US Department of Energy to upgrade its major test facility, the National Spherical Torus Experiment (NSTX). The three-year project, worth USD 94 million, is part of PPPL's mission to chart an attractive course for the development of nuclear fusion as a clean, safe and abundant fuel for generating electricity.
"The US fusion program places increasing emphasis on fusion materials science, and as part of that long-term vision, is presently considering moving toward a fusion nuclear science facility (FNSF)," explains Jonathan Menard, the NSTX program director. "Its objective is to develop the experimental database for all fusion reactor internals and, in parallel with ITER, provide the basis for DEMO." (For more information, see a recent  presentation by Dr. Edmund Synakowski, Associate Director, Office of Science, for Fusion Energy Sciences.) 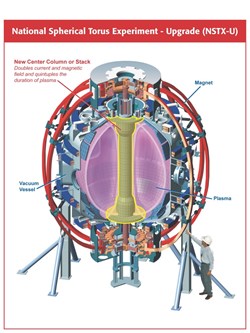 "Both standard aspect ratio and low aspect ratio 'spherical' tokamaks are being considered for an FNSF device, and NSTX in the USA and MAST in the UK are the largest spherical tokamaks in the program worldwide. The spherical tokamak has the potential to provide a smaller and more maintainable FNSF, but many physics and technical issues remain. The recently begun upgrade of NSTX (and upcoming upgrade of MAST) will help address and resolve these remaining issues for spherical tokamaks."


The NSTX Upgrade will include the doubling of the reactor's
magnetic field to 1 tesla, the doubling of its plasma current to 2 million amperes, the doubling of its beam heating power from 5 MW to 10 MW, and a quintupling of the pulse-length from 1 s to 5 s. "This enhancement will provide access to reduced collisionality (higher temperature) to allow the study of the plasma transport and stability properties much closer to FSNF conditions," says Menard. "The new second neutral beam system that will provide the increased heating power is aimed more tangentially to increase the current drive efficiency and controllability, and this should enable access to fully non-inductive operation. Fully non-inductive current drive is essential for steady-state operation of a tokamak or spherical tokamak-based FNSF to provide continuous operation and high neutron fluence. The same new neutral beam injection system is also predicted to be much better absorbed at low plasma current and will enable tests of non-inductive plasma current ramp-up—a critical need for spherical tokamak designs that do not incorporate a central solenoid." 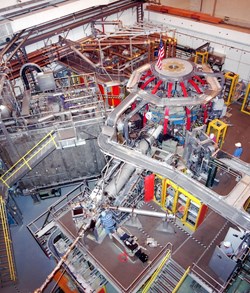 Inside the NSTX test cell: the apple-shaped fusion experiment includes exterior vertical red magnetic coils and horizontal blue magnetic coils. The rectangular steel box to the left of the machine contains the neutral beam system for heating plasma.
"The NSTX Upgrade (NSTX-U) will also explore high-flux-expansion 'snowflake' divertors, a novel magnetic divertor named for its shape, as well as liquid lithium as potential divertor power and particle control solutions for FNSF and beyond. All of the above enhanced research capabilities of the NSTX Upgrade also address key research needs for DEMO—independent of aspect ratio. Lastly, the lower collisionality plasmas and overall expanded operating capabilities of the NSTX Upgrade (NSTX-U) facility will enhance support of ITER physics studies and ITPA joint experiments as we approach ITER operation. For example, the new neutral beam injection system and higher field will enable NSTX-U to modify the fast-ion distribution function and the drive for fast-ion instabilities, improving our ability to understand fast-ion confinement for ITER burning plasmas. As another example, NSTX-U will be able to investigate rotation damping and transport changes from 3D magnetic fields at reduced collisionality to support improved understanding of ELM control using 3D fields on ITER."
Click here to read the related story on the PPPL website.