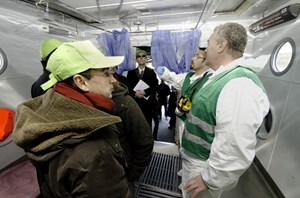 Observers from the US, Russia, Korea, Germany, the IAEA and ITER were present in Cadarache and granted unlimited access to the operations.
The earthquake that shook the region last Tuesday 17 January didn't originate in the depth of the Earth's crust but in the brains of the risk managers at CEA and the French Nuclear Safety Authority.


It wasn't announced by slight tremors, dogs howling at the moon, or bats fleeing their caves in panic ... but by an SMS sent to CEA Cadarache management, French authorities and the mayors of the surrounding villages.


The message at 9:04 a.m. was short and chilling — a strong earthquake has just hit the lower Durance River valley.  As virtual damage and casualties were being assessed, Act One of the long-planned scenario began to unfold.


Two and a half years ago, as Provence commemorated the 100th anniversary of the 11 June 1909 Lambesc Earthquake that claimed 46 lives and destroyed several thousand buildings (among which 1,500 in Aix-en-Provence), French authorities decided to organize a large-scale exercise based on a similar scenario.


Testing for "earthquake-readiness" is routine at CEA-Cadarache. Exercises are organized at least once a year; equipment, procedures, and instructions to personnel are constantly updated; and coordination with government emergency services systematically assessed and refined. 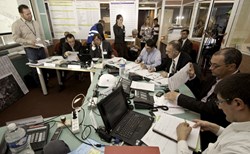 The objective was to test not only CEA-Cadarache's response to a major earthquake, but also to analyze the decision-making process between the different parties involved. Here the ''War Room,'' where actions were coordinated. (CEA-Cadarache Director Maurice Mazière is 4th from right.)
Last Tuesday's exercise, however, was the first of its kind. The "scenario" was not revealed to CEA-Cadarache management until the first virtual tremors were felt, and the script continued to evolve throughout the day—as would be the case during an actual disaster.


The objective was to test not only CEA-Cadarache's response to a major earthquake, but also to analyze the decision-making process between the different parties and to involve the local populations in the exercise: coordination with civilian authorities, both national and local, is paramount.


In the world of nuclear operators, the interest for the exercise was high: observers from the US Department of Energy, Russia's Rosatom, Korea's Institute of Nuclear Safety, Germany's Nuclear Emergency Team, the Incident, Emergency Centre of the IAEA, and ITER were present in Cadarache and granted unlimited access to the operations.


Minute by minute, as news updates reached CEA-Cadarache's Command Centre, the extent of the simulated disaster became clearer: the magnitude of the earthquake, whose epicentre was located ten kilometres northwest of Cadarache, was 5.5 on the Richter scale—close to the "maximum historically-plausible"; telephone land lines and cell phone networks were down; and roads were impassable north of Cadarache. In Manosque, one thousand inhabitants were left without a home.


At CEA-Cadarache, the PEGASE installation, where nuclear waste is stored, was destroyed and three persons buried in the rubble. Fires had started in the "secret" nuclear installation where the new generation submarine-propulsion reactor is being developped. 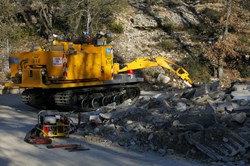 Remotely operated bulldozers and other smaller robots cleared the rubble in areas where radioactivity forbade human presence. Based in Chinon, central-western France, the specialized Intra unit was created in the wake of the Tchernobyl accident in 1986. © Lesenechal-CEA
However harsh the scenario, it was a realistic one: such things could happen in the case of an earthquake and CEA, along with civilian authorities, would have to deal with the consequences.


By the end of the simulation, fires had been extinguished, rubble cleared by remotely operated bulldozers, and casualties treated onsite before being flown by helicopter to a specialized hospital close to Paris.


CEA-Cadarache Director Maurice Mazière, who had spent most of the day in the "War Room" coordinating the action on site, said he was "satisfied" with the outcome of the exercise. Communication between all parties had been smooth and to the point; everyone had agreed on the measurements, evaluations and calculations performed; and all teams present had efficiently coordinated their actions.


He acknowledged, however, that one parameter was impossible to simulate: "the pressure and tension that come with an actual disaster, and that would undoubtedly impact the organization of our work."