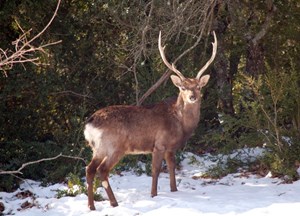 This picture of a sika deer was recently taken on CEA-Cadarache site, close to the newly installed 400 kV powerline pylons. © Guis-CEA
Wildlife is thriving in the forests of Cadarache. Wild boars, mouflon goats and deer freely roam the vast CEA enclosure (900 hectares) and the smaller National Forestry Commission reserve (200 hectares) located opposite the future ITER Headquarters.


Boars have always been at home in Cadarache. In 1964, archaeologists digging a Bronze Age necropolis within CEA premises came up with a most exceptional find: a tomb containing the remains of a large wild boar, two copper rings and a serpentine ritual axe-head. Wild boars were considered as sacred then and, although they are not anymore, CEA-Cadarache has adopted them as its totem.


The history of the mouflon goats is more recent—and tragic. The present herd of 150 (plus 80 in the Commission reserve) descends from two males and one female that were intended as a gift for poor King Alexander I of Yugoslavia, who was unfortunately assassinated upon his arrival in Marseille on the occasion of his state visit to France in 1934.


A lesser-known story of Cadarache wildlife is that of the sika deer that gracefully roam the land—one hundred heads in the CEA enclosure and 20 in the National Forestry Commission reserve. Four of these timid and elegant animals were offered to French president Sadi Carnot (1837-1894) by the 122nd Emperor of Japan Mutsuhito, the "Meiji Emperor" (1852-1912) considered as the founder of modern Japan. 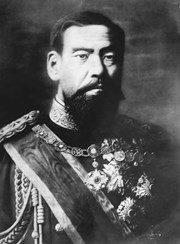 In 1890 the Meiji Emperor decided to offer his French republican counterpart a personal gift in the form of four sika deer from Nara Park, one male and three females.
In the 1860s, Japan and France had established diplomatic, economic and even military relations. At the 1867 Paris World Fair (Exposition Universelle) the works exhibited at the Japan Pavilion caused a sensation, triggering an artistic movement called japonisme that was to have a major influence on French impressionist painting.


In 1890, in order to strengthen the relationship between the two heads of state, the Meiji Emperor decided to offer his French republican counterpart a personal gift in the form of four deer of the "sika" species (cervus nippon), one male and three females. The animals were no ordinary deer: they came from the park in Nara, once the capital of Japan, and were considered as sacred messengers of the gods.


Upon their arrival in the spring of 1890, the four sika deer were released in the Presidential Hunting Reserve in Marly (near Paris) to grow and multiply and ... be hunted on special occasions. Eight years later, when the original four had grown into a small herd of seven stags and eleven does, they were moved to a larger enclosure in Rambouillet, also part of the Presidential Domain. 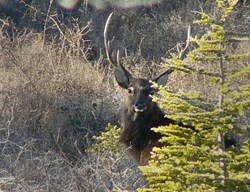 Alain Savary, the local National Forestry Commission representative, took this picture in the animal reserve located opposite the future ITER Headquarters. © Alain Savary
The deer numbered 42 in 1919 (an equal number had been hunted during the war to provide meat to the local hospitals) and 76 in 1924, the year Gaston Doumergue was elected to the presidency. President Doumergue took a fancy to the beautiful creatures and forbid any further hunting. In order to regulate their population, he ordered instead that the animals be divided among various national parks and wildlife reservations, among them Cadarache.


The first pair of sika deer arrived here in February 1928, followed shortly by another pair. In 1939, a National Forestry Commission Inspector noted that the herd, now numbering 25 head, could be found "close to the Durance and Verdon riverbeds where, even during the hottest summer months, they could benefit from a cool environment, and find water and food."


More than eighty years have passed. The Emperor's deer are still here. They can be spotted grazing in the early morning hours, both inside the National Forestry Commission's reserve and within the CEA-Cadarache enclosure. If disturbed, they will look at you for a short moment, a tinge of reproach in their eyes.


Then they will turn and walk away slowly and gravely, as befits a messenger of the gods.