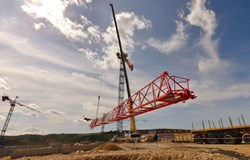 ''The only real difficulty,'' explains a crane dismantling specialist ''is the wind. Also ... finding enough room to lay the boom on the ground ...''
With the boom hanging solidly from a mobile crane, specialists can begin unscrewing the large bolts that connect the 14.7-tonne boom to the tower. Once freed, the lifting crane slowly moves it down to the ground where it will await further dismantling.


"The only real difficulty," explains dismantling specialist Armand Depit of MAGSUD, based in Aix-en-Provence, "is the wind. Also ... finding enough room to lay the boom on the ground ..."
On Wednesday, as crane C3 was dismantled, the air was perfectly still on the ITER platform and there was still plenty of room—although not for long—in the Tokamak Pit work site perimeter.

The dismantling operation went smoothly and took less than one hour and a half.