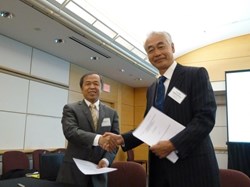 ITER Director-General Osamu Motojima shaking hands with Luo Delong, head of ITER China, after having signed the Procurement Arrangement for ITER's pulsed power electrical network, which will supply alternating current (AC) power to the machine's superconducting coils and its heating and current drives. This mighty power source will be procured by China.
During this week's meeting of the ITER Council in Washington, four Procurement Arrangements were signed between the ITER Organization and Domestic Agencies, taking the total in-kind procurement value of ITER construction to the 80 percent mark.


Number one was the Procurement Arrangement for ITER's Pulsed Power Electrical Network (PPEN), which will supply alternating current (AC) power to the machine's superconducting coils and its heating and current drives. This mighty power source will be procured by China. The PPEN will absorb 500 MW and 200 Mvar pulsed power for the pre-programed physics scenarios and plasma current, position and shape control. The power will be distributed from three main 66kV busbars and three main 22 kV busbars that will normally operate uncoupled from one another.
The loads connected to PPEN are mainly large thyristors based AC/DC converters rated typically in the range from 5 to 90 MVA.


Most of the large and dynamic loads are directly fed from the 66 kV busbars, that is to say the AC/DC converters feeding the superconducting magnet coils and the neutral beam system providing plasma current. The loads with relatively lower power (normally less than 20 MVA/unit) are fed from the 22 kV busbars.
The Procurement Arrangement signed with the Chinese Domestic Agency comprises the manufacture, inspection, testing, packaging, shipping and provision of on-site technical assistance during the onsite assembly, the subsequent acceptance tests and the commissioning and integration of the items; this applies to all the items, structures, materials and mechanical and electrical facilities for the new 400 kV substation and the transformers associated with the 400/66/22 kV supplies and the 66/22 kV items and cable.


Along with Victor Udintsev from the ITER Organization, Greg Hanson of Oak Ridge National Laboratory's Fusion Energy Division and Tony Peebles of the University of California at Los Angeles have been working on the conceptual design of the reflectometer with an international team that includes staff from ITER; the University of California, Los Angeles; Oak Ridge; and the Princeton Plasma Physics Laboratory.


ITER's complex diagnostics are configured at ports in the vacuum chamber around the plasma vessel, monitoring and providing data over time of the evolution of plasma properties such as electron density and temperature. Besides providing data on the electron density profile evolution, the new reflectometer will monitor small-scale density turbulence and larger-scale magneto hydrodynamic modes inside the plasma, such as fast-ion driven instabilities. Such instabilities can cause the plasma to lose heat, particles, and momentum. It is important for the safety of the ITER device to understand and monitor the amplitude and spatial distribution of these instabilities, so that researchers can project forward to the next-stage fusion reactor. 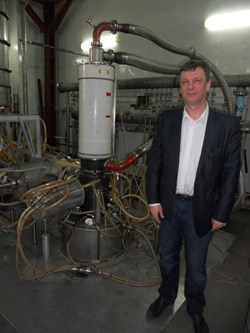 Gregory Denisov, standing next to a gyrotron developed for ITER in Nizhny Novgorod, Russia.
Wednesday, 20 June also witnessed the signature of the first of four Procurement Arrangements that are to be signed for the procurement of ITER's powerful 1MW microwave sources (gyrotrons). This week's Procurement Arrangement was signed with the Russian Domestic Agency, which will be providing 8 of the 26 gyrotrons installed on ITER. Each gyrotron generates roughly the equivalent of 1,000 microwave ovens in a relatively compact single tube roughly 2 m in height and ≤50 cm in width. The Russian scientific teams have extensive experience in developing gyrotrons of various powers and frequencies for research facilities around the world.


Part of ITER's electron cyclotron team had the chance last year to visit the Russian laboratories and witness the highly reliable operation of the gyrotron for near 1MW output power and pulse lengths of >600sec. The Russian teams in Nihzny and Moscow have produced several ITER-like prototype tubes that have demonstrated performance equivalent to ITER operation needed for the Q≥10 / 15MA scenario. The first gyrotron is planned to be delivered to the ITER site in France in early 2016 and will be used to generate the spark to start the very first plasma in ITER. 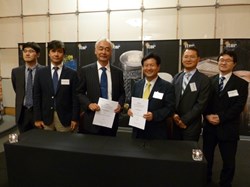