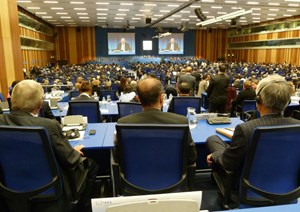 
Over five days, close to 2,000 high-level governmental representatives from the IAEA's 155 Member States gathered to consider and discuss a range of topics on the peaceful development of nuclear technologies related to the IAEA's programs, focusing on nuclear radiation and waste safety; nuclear security; nuclear science; technology and applications; technical cooperation; and improving the efficiency of the safeguard systems.


ITER Director-General Osamu Motojima attended the Conference as a representative of one of the Non-Governmental Organizations accredited by the IAEA—an opportunity to raise the profile of fusion and ITER in one of the largest energy gatherings worldwide.


At the opening of the 56th IAEA General Conference, the message from the United Nations Secretary-General, Ban Ki-Moon, was very clear: "We are also aiming for progress on the critical issue of nuclear terrorism. On 28 September, I will convene a United Nations High-level Meeting on Countering Nuclear Terrorism, which I hope will contribute to strengthening the rule of law in this field."


In the conference's opening session, IAEA Director General Yukiya Amano focused on major developments in the IAEA's work. "Today, the Agency is making important contributions to tackling fundamental global problems such as poverty and hunger, energy shortages, cancer and climate change. The Agency provides effective support to enhance the safe and secure use of nuclear energy in Member States."


According to Director General Amano, nuclear energy continues to develop: "When I became Director General three years ago, the talk was of a nuclear renaissance. Then the Fukushima Daiichi accident occurred, raising fundamental questions about the future of nuclear energy throughout the world. Eighteen months after the accident, it is clear that nuclear energy will remain an important option for many countries." 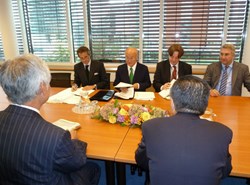 The 56th IAEA General Conference provided the Director-General of the ITER Organization, Osamu Motojima, with an opportunity to discuss with IAEA Director General Amano (centre) and to meet with several delegations present in Vienna.
However, safety is now a major issue for all countries. "The most important lesson that we have learned from Fukushima Daiichi is that we need a much more intense focus on nuclear safety. [...] We have expanded the content of IAEA expert peer review services to Member States to include the first lessons learned from the accident. In December, the Fukushima Ministerial Conference on Nuclear Safety, organized by the Government of Japan and the IAEA, will take place in Fukushima Prefecture. At this conference, we will present a report outlining the conclusions of the international expert meetings held so far. We will also prepare a comprehensive report on the Fukushima Daiichi accident, to be finalized in 2014."


The IAEA's Director General stressed the fact that there are 117 States with additional safety protocols and this number is still rising. This is encouraging because the additional protocol is an essential tool for the Agency to be able to provide credible assurance that there is no undeclared nuclear material and activities in a country. Nevertheless, there are still 13 countries without safeguard agreements.


Director General Amano asked for these to be brought into force as soon as possible. "The IAEA should remain first and foremost a technical organization, although our work can have important political implications," he concluded.


The 56th IAEA General Conference also provided the ITER Director-General, Osamu Motojima, with an opportunity to discuss with the IAEA Director General and to meet with several delegations present in Vienna. Director-General Motojima and the Head of the ITER Office of the Director-General, Takayuki Shirao, successively met with Bernard Bigot, High Representative for the Implementation of ITER in France; with the representative of the Holy See Monsignor Branach; with Ambassador Toshio Osawa from Japan; with the Head of the Kazakhstan Delegation Mr Chatrikin; and with the Ambassador of the Principality of Monaco, Claude Giordan.