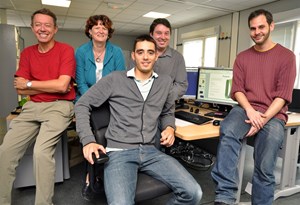 The winning team: from left to right, Wolfgang Werner, Elisabeth Storath, Yoan Cuvillier, Tristan Sarot and Bastien Bezol.
When CAD Designer Yoan Cuvillier was faced with endless months of work virtually positioning thousands of tiny components on the vacuum vessel shell 3D model, he thought that maybe there was a better way to do it than one by one.


Yoann and his colleague Tristan Sarot had already spent four months positioning the clamps that hold the electric loops in one sector of the vacuum vessel shell (these electric loops are part of a diagnostic system that measures the energy of the plasma). Each loop needs about 30 to 470 clamps; there are some 40 loops in each sector and there are eight sectors that need to be equipped.


Do the math: almost three man/years of work were required just to position the clamps...


Following the required procedure, Yoan created a "CAD/ENOVIA ticket" suggesting the task could be automated (CATIA is the software used by CAD designers at ITER, ENOVIA is the database).


Tackling the issue along with the young the 21-year-old CAD designer, IT and the CAD Infrastructure & Applications Team (namely CAD Support Technician Bastien Bezol; CAD Development Coordinator Elisabeth Storath and CAD Responsible Officer Wolfgang Werner) soon produced a "macro" (a set of repetitive instructions) which not only allowed for the automatic positioning of the clamps but which could be applied to any repetitive action on components. 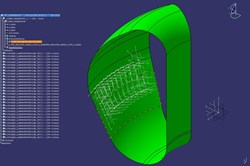 The macro produced almost perfect results on the first try-out. It now takes 10 to 30 minutes to clamp a loop, when an average of one full day was required previously.
"There are of course software developments that accelerate this kind of work," explains Wolfgang Werner. "But this was the first time the idea, and the suggestions, came from a CAD Designer."


The "CATIA Macro for Clamps Positioning" that Bastien Bezol conceptualized, and that IT implemented, "produced almost perfect results on the first try-out," says Wolfgang. It now takes 10 to 30 minutes to clamp a loop, when an average of one full day was required previously.


A mere hundred lines of code had done the trick—no more dull, repetitive work for Yoan, Tristan and their CAD designer colleagues, and a substantial savings in manpower and time for the ITER Organization.