IFMIF lithium loop is back on track

The IFMIF Team in Rokkasho 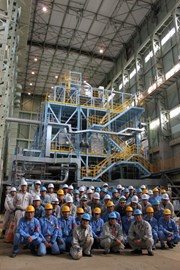 The 20-metre-high lithium loop was severely damaged by the terrible earthquake that hit Japan on 11 March 2011. Thanks to massive efforts, it is now back on track with a heavy scientific agenda.
The International Fusion Materials Irradiation Facility (IFMIF) will characterize the properties of the building bricks of future fusion power plants.


The project is part of the Broader Approach that Japan and the European Union formally launched in 2007 in parallel with the ITER Agreement. IFMIF is coordinated from Rokkasho in the Aomori prefecture and is led by Juan Knaster, formerly an ITER staff member in the Magnet Division.


The enthusiastic IFMIF/EVEDA project community is full of energy, which can be felt through the 40 papers presented at the recent SOFT 2012 conference held in Liège (Belgium).


IFMIF will generate a neutron flux capable of providing 50 displacements-per-atom/per-year (dpa/y) in 100 cm³ and 20 dpa/y in 500 cm³ in its high flux testing modules. These modules will house 960 different specimens to provide a complete mechanical characterization of the chosen material. Using small specimens is a well-known technique that has been around for decades in the field of fission reactor vessels. It is being jointly developed by both implementing agencies for future fusion applications.


The 14 MeV neutron flux will be generated by bombarding a beam of deuterons at 40 MeV onto a liquid Li screen flowing at a speed of 15 m/s and a temperature of 250 ºC through a series of (d, Li) stripping reactions. Both facilities involved will be validated thanks to an accelerator prototype, LIPAc, presently under construction in Rokkasho and by the EVEDA/IFMIF Li test loop in Oarai in the Ibaraki prefecture.


The Li loop built by Mitsubishi Heavy Industries Mechatronics Systems, Ltd (under a contract with JAEA) was ready to operate early in 2012.


However, the terrible earthquake that hit Japan on 11 March 2011 caused severe damage. Due to the enormous interest in the global fusion program and after a difficult year where massive efforts were made to repair the facility, the nightmare has finally been forgotten and the Li loop is back in operation. Now back on track, it has a heavy scientific agenda lined up for it over the next two years or so.