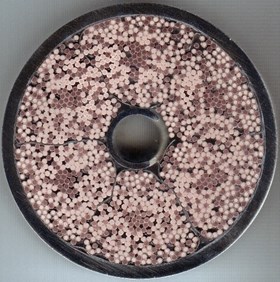 A cross section of the Russian toroidal field conductor that was recently tested in SULTAN.
Having recently celebrated its fifth anniversary, the ITER Project has moved steadily from negotiations to real manufacturing, and from dummy testing to production of the Tokamak's construction elements.


The Russian toroidal field conductor with bronze route strands  was tested in the SULTAN facility by Centre de Recherches en Physique des Plasmas- Ecole Polytechnique Fédérale de Lausanne (CRPP-EPFL) in late September-early October 2012. This is the fourth Russian sample to be tested in SULTAN but the first sample containing two sections of conductor made of real production length which will be used to manufacture real toroidal field coils for the machine. The left section of the conductor was cut from a side double pancake pre-production conductor (Phase III) while the right section was made from first production (Phase IV) of a regular double pancake.


The results obtained with the the TFRF4 (Toroidal Field Russian Federation #4) sample show very good agreement with results of the two last samples TFRF2 and TFRF3, which demonstrated the relatively good stability of the conductor during electromagnetic cycling, as well as its good durability during the warm-up/cool-down procedure.


Testing the TFRF4 sample was a very important milestone which completed the pre-production phase of the toroidal field conductor procurement process. This means we can now proceed to the final production stage. At the same time, it opens the way to start shipping the real conductors to the coil manufacturer so they can be used to make coils for the ITER Tokamak.