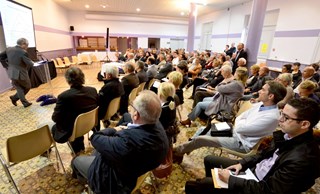 ITER DDG Carlos Alejaldre presented the ongoing progress on the ITER worksite and a detailed projections of manpower needs in the coming years.
Beginning in the first quarter of 2013, the number of construction workers on the ITER site will rise sharply, passing the 1,000 mark in less than six months to stabilize at about 2,600-2,800 in 2015, before finally declining in 2016.
By late 2014, construction personnel will be joined by specialists in charge of assembling the machine. They will be 1,000 by mid-2016 and close to 1,600 in late 2018.


From late 2015 to late 2016, these two combined workforces will lead to a peak of more than 3,500 workers on the ITER site, not counting the present ITER staff and contractors amounting currently to approximately 1,000 people (this will remain stable throughout the coming years).


Projections from both Agence Iter France and the French regional authorities indicate that accommodation for some 1,500 to 2,000 workers arriving in the region will have to be found during this peak period.


These figures were announced last Friday 19 October at a meeting organized by the Commission Locale d'Information (CLI) in Vinon-sur-Verdon.


The CLI acts as an official interface between ITER Organization (nuclear operator of the ITER facility) and the local population, which means that anything the public feels it should know falls under its jurisdiction. Housing 1,500 to 2,000 workers close enough to ITER so that commuting does not exceed 30 minutes either way is definitely an issue that concerns the local population and authorities—the housing market in the defined area is rather tense, with an estimated rental stock that does not exceed 300 to 500 units. 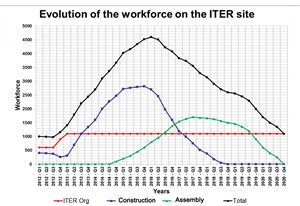 From late 2015 to late 2016, a peak of more than 3,500 workers is expected, not counting the present ITER staff and contractors amounting to approximately 1,000 people.
This is no new preoccupation for the French authorities and local mayors: the first meetings on the subject were organized some 17 years ago, when Cadarache was already preparing its bid to host ITER. More recently, Agence Iter France drew up an inventory of "potential solutions" in close collaboration with the local mayors, the government authorities and the companies likely to bid for construction or assembly contracts.


The problem, however, is that "the picture is still unclear," as pointed out by the General Secretary for Regional Affairs, Gilles Barsacq. As in any project this size, the work organization on the ITER site will be characterized by "a cascade of subcontractors"; some will be local, some not, and each will have its own policy in terms of employee housing.


Other large projects have been facing the same issues and Agence Iter France has closely studied how they were taken into consideration, for example at the EPR worksite in Flamanville (Normandy) and at the Millau viaduct in south central France.


In short, companies operating on the ITER site must be given a number of options from which they can choose the one that suits them best. 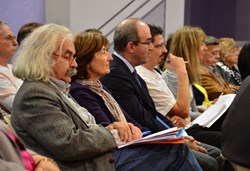 Close to one hundred people, most of them local residents, participated in the meeting held at Vinon-sur-Verdon's Community Hall.
Working with the local mayors and specialized relocation agencies, Agence Iter France has retained 20 projects located along the Durance River, most of them within a 30-minute drive from the ITER site.


Slightly beyond this limit, the largest of these projects is located in Château-Arnoux (pop. 5,300) where accommodation in mobile homes for 700 can be organized at the local campground. In Manosque, the youth hostel can provide 40 places; the village of Corbières has offered to turn a soccer field into a campground; and in Montmeyan, 200 beds are available at a summer camp.


"What we must avoid at all cost," explained Agence Iter France Director Jérôme Pamela, "is uncontrolled or illegal situations such has having trailers parked here and there."


Most of these projects require investments: companies with ITER contracts could finance the renovation of, say, a worker or youth hostel. They could therefore house their employees for the duration of the contract and return it to its owner (generally the municipality) once the job has been finished. The municipality would then put the building to a different use in line with its own development projects.


It was clear from the figures presented at the Vinon-sur-Verdon meeting and from the ensuing discussions, that the area considered—with an overall population of 250,000 stretching between Château-Arnoux in the north to Aix-en-Provence in the south and growing some 1 percent every year—is capable of absorbing 1,500 to 2,000 workers without any major problems. Representatives from the Ministry of Education and the Regional Health Agency assured that the workers' presence would have no impact on the local school and health infrastructures. 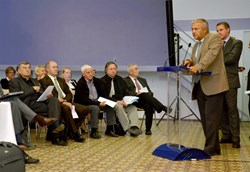 ''What we must avoid at all cost,'' explained Agence Iter France Director Jérôme Pamela, ''is uncontrolled or illegal situations such as having trailers parked here and there.''
The local population, especially those living in villages near the ITER site, have long voiced their preoccupation with the transportation issue. Daily traffic through Vinon-sur-Verdon (pop. 4,000), for instance, clocks up an average of 13,500 vehicles per day, while access roads to the worksite are narrow and often saturated by traffic due to both ITER and the CEA-Cadarache centre.


As companies will organize their own bus services, parking lots on the ITER construction site will be deliberately "undersized" to discourage the use of individual vehicles. There is also an ongoing reflection on using the railroad that runs along the Durance River on the side opposite to ITER.


However, one of the most efficient measures (already decided) will involve implementing offset working hours for worksite personnel so as to reduce clogging on access roads to ITER.


"Accommodating 1,500 to 2,000 workers should not be seen as a constraint," concluded the General Secretary for Regional Affairs, "but as an opportunity."