Share Tweet
Korea aims at completing a DEMO by 2037
Korea's projected K-DEMO: a tokamak with a 6.65-metre major radius (as compared to ITER's 6.21 metres), a peak TF field of ~16 Tesla, and a TF field at plasma centre of ~7.6 Tesla.
Harnessing fusion energy in the 21st century is a lot like going to the Moon in the 1970s. At that time, as each manned flight project unfolded, another one was already in the plans. One half-century ago, the Mercury, Gemini and Apollo programs were the space equivalent of the fusion projects JET, ITER and DEMO.
In space exploration, as in fusion research, planning for the next step when the present one has just gotten underway is a necessity. This was the case with JET, which began operating two years before the ITER project was officially launched (1983), and it is happening now with ITER, with planning for the next stage device underway even before fusion experiments have started in 2027.
Hundreds of physicists and engineers throughout the world are now planning for DEMO, the generic name for a pre-industrial demonstration power plant that will bring all technologies to the level of performance, reliability and efficiency required for the production of electricity.
As was demonstrated during the recent international workshop held at the University of California, Los Angeles, on 15-19 October 2012, the time is now ripe for developing these ideas.
Korea (Pop. 49 million), which relies on imports for more than 90 percent of its energy needs, is among the countries that have embarked on the development of a preliminary concept for DEMO. The main parametres of the Korean DEMO ("K-DEMO") have already been defined and construction is expected to be completed in 2037.
Newsline sat with Kijung Jung, head of the Korean ITER Domestic Agency, to learn more.
R.A.
Newsline: Many countries and groups are currently working on a concept definition for DEMO. Would you say that Korea has now taken a decisive step in DEMO's direction? 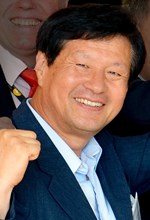