Complex logistics do not intimidate "Kevin" 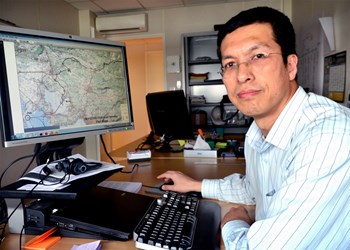 Yanchun, who adopted the name ''Kevin'' for the convenience of communication, has come from Shanghai to ITER to manage the logistics of the components that the ITER Domestic Agencies will begin shipping in 2014.
Three months ago, Yanchun Qiao experienced a drastic change is his environment: moving from Shanghai (pop. 23 million) to Manosque (pop. 22,000), he left a megalopolis that never sleeps for a small town that closes down every weekday at 7:00 p.m. "I arrived on Sunday. It was very strange. It took me some time to realize that shops systematically closed on Sundays and Mondays."


Yanchun has adapted. "You just need to buy food in advance for the weekends. This is a bit foreign for someone from China, especially someone from Shanghai, but it's manageable." However, closing early and remaining shuttered two days a week has its advantages: "It is a lot quieter here, and I find it's not unpleasant at all."


Since graduating from the Shanghai-based China Europe International Business School (a joint operation of the Chinese government and the European Commission) Yanchun has always worked for multinational companies: he began his career at CHEP, an Australian logistics handling and equipment-pooling service company and later joined Maersk, the Denmark-based logistics giant. In both cases he was based in Shanghai, with a lot of travel worldwide.


Yanchun has come to ITER to manage the framework contracts pertaining to the transport and logistics of the ITER Organization components that Domestic Agencies will begin shipping in 2014. The complexity of the task doesn't intimidate him. It is "quite similar" to what he did for nearly three years at Maersk. "Basically," he says, "it's a coordination job."

"Test campaign" in September
Prior to the delivery of the first machine components in 2014, the ITER Itinerary will undergo a « test and measures campaign », presently scheduled in September 2013. Produced by the Logistics Service Provider DAHER, a 9-meter high, 19-meter long, 600-ton mock-up will be used to establish stress and resistance measurements all along the Itinerary.
Although the load will be representative of the actual components that will travel the Itinerary, the « test and measures campaign » will be quite different from the actual transports beginning in 2014.
As repeated measurements will have to be conducted, the operation will last about five days, when actual convoys will cover the distance between the shores of the Étang de Berre to the ITER site in three to four nights.

Yes but. "Working for the ITER project is not like working in a commercial context. At ITER, between the ITER Organization and the Domestic Agencies, it is a bit like at the United Nations. There is no direct subordination; no 'order' that can be given ... which means you need strong communication and lots of diplomacy."


Complexity is in the nature of logistics. "There are always lots of entities involved, lots of details to deal with. In my previous jobs it was sometimes even more complicated: at Maersk, at times, I had to deal with some 50 business units. At ITER, we have only seven..."


Well, eight—if you count the French leg of the voyage. Once the components have been safely unloaded at Port de Marseille, Fos, another journey will begin—quite short as compared to the distance some of the components will have travelled by then, but complex and delicate.


The 136-kilometre Itinerary (including the crossing of the Étang de Berre by barge) that leads from Marseille-Fos harbour to the ITER site is not always direct, either geographically or administratively. As the convoys carrying the heavy exceptional components travel along the specialized ITER Itinerary, they will cross or impact dozens of administrative districts and involve several public or private entities.


Although the ITER Organization does not deal directly with the French authorities—this is the mission of Agence Iter France—it is part of Yanchun's responsibility to keep a close eye on the ongoing processes: the improvements that are still needed on some portions of the Itinerary; the finalization of the conventions with the different entities involved, and the "big challenge" of the technical test (see box) that will be organized in September.


"Realizing the technical test in September will not impact the components delivery schedule," says Yanchun — or should we say "Kevin,", the nom de guerre Yanchun chose when he entered the China Europe International Business School. "I adopted the name for the convenience of communication. 'Kevin' is a simple as possible and works in many languages and countries..."


Even in France, where the name 'Kevin' was totally unknown and unused before the 1980s and suddenly became one the most popular given names in the following decade.