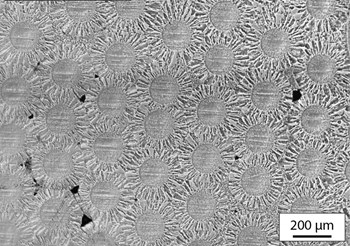 Cross-section of the new tungsten compound. The microscope shows the circular cross-sections of hair-fine tungsten wires, tightly bunched and embedded in a tungsten matrix (photo: IPP, Johann Riesch).
Tungsten is particularly suitable as material for highly stressed parts of the vessel enclosing a hot fusion plasma, as it is the metal with the highest melting point. A disadvantage, however, is its brittleness, which under stress makes it fragile and prone to damage. A novel, more resilient compound material has now been developed by the Max Planck Institute for Plasma Physics (IPP) at Garching. It consists of homogeneous tungsten with embedded coated tungsten wires. A feasibility study has just shown the basic suitability of the new compound.


The objective of the research conducted at IPP is to develop a power plant that, like the sun, derives energy from fusion of atomic nuclei. The fuel used is a low-density hydrogen plasma. To ignite the fusion fire the plasma has to be confined in magnetic fields and heated to a high temperature, up to 100 million degrees in the core. Tungsten, as demonstrated by extensive investigations at IPP, is a highly promising metal as material for components coming into direct contact with the hot plasma. A hitherto unsolved problem, however, has been the brittleness of the material: tungsten loses its toughness under power plant conditions. Local stress—tension, stretching or pressure—cannot be obviated by the material slightly giving way: cracks form instead. Components therefore react very sensitively to local overloading.


That is why IPP looked for structures capable of distributing local tension. Fibre-reinforced ceramics served as models: for example, brittle silicon carbide is made five times as tough when reinforced with silicon carbide fibres. After a few preliminary studies, IPP scientist Johann Riesch was able to investigate whether similar treatment can work with tungsten metal.

ITER divertor: the choice will be made this year
As agreed at the last Science and Technology Advisory Committee (STAC) the decision on the divertor first armour material—carbon-fibre or tungsten—for the non-nuclear phase of ITER is planned for the last trimester of 2013.
A research and design campaign has been underway worldwide to support design work on the tungsten divertor, to qualify the technology at 20 MW/m2, and to verify the behaviour of tungsten experimentally, in particular its melting behaviour.
Through International Tokamak Physics Activity (ITPA) activities, the physics community is conducting a global assessment of the implementation of a tungsten divertor from the first phase of ITER.
The final design review for the ITER divertor will take place at the end of the month.

The first step was to produce the new material. A tungsten matrix had to be reinforced with long coated fibres consisting of extruded tungsten wire thin as hair. The wires, originally intended as luminous filaments for light bulbs, where supplied by Osram GmbH. Various materials for coating were investigated at IPP, including erbium oxide. The completely coated tungsten fibres were then bunched together, either side by side or braided. To fill out the gaps between the wires with tungsten Johann Riesch and his co-workers then developed a new process in conjunction with English industrial partner Archer Technicoat Ltd.


Whereas tungsten workpieces are usually pressed together from metal powder at high temperature and pressure, a more gentle method of producing the compound was found: the tungsten is deposited on the wires from a gaseous mixture by applying a chemical process at moderate temperatures. This was the first time that tungsten-fibre-reinforced tungsten was successfully produced, with the desired result—the fracture toughness of the new compound had already tripled in relation to fibreless tungsten after the first tests.


The second step was to investigate how this works. The decisive factor proved to be that the fibres bridge cracks in the matrix and can distribute the locally acting energy in the material. Here the interfaces between fibres and the tungsten matrix, on the one hand, have to be weak enough to give way when cracks form and, on the other, be strong enough to transmit the force between the fibres and matrix. In bending tests this could be observed directly by means of X-ray microtomography demonstrating the basic functioning of the material.


Decisive for the material's usefulness, however, is that the enhanced toughness is maintained when it is applied. Johann Riesch checked this by investigating samples that had been embrittled by prior thermal treatment. When the samples were subjected to synchrotron radiation or put under the electron microscope, stretching and bending them also confirmed in this case the improved material properties. If the matrix fails when stressed, the fibres are able to bridge the cracks occurring and stem them.


The principles for understanding and producing the new material are thus settled. As a prerequisite for large-scale production, samples are now to be produced under improved process conditions and with optimized interfaces. The new material might also be of interest beyond the field of fusion research.