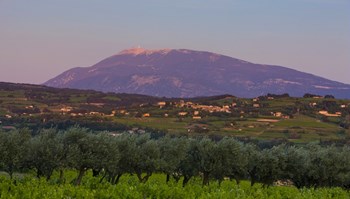 
The climb to the summit at an altitude of nearly 2,000 metres is one the toughest and most gruelling in professional cycling. The 21-kilometre road that leads from the village of Bédoin to the finish line has an average gradient of 7.5 percent, with peaks above 10 percent—meaning that for every kilometre covered, the rise in altitude can be as high as 100 metres.


The Tour de France has ascended the Beast 14 times since 1951. Everyone here, bicycle aficionado or not, remembers the tragic date of 13 July 1967 when British champion Tom Simpson collapsed and died during the climb at age 29.


The mountain, which appears perpetually snow-capped even in the hottest days of summer (bare, white limestone creates the illusion) acts as a magnet for cyclists around the world. 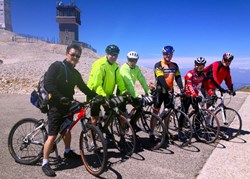 The impressive ITER climbers (from left to right): Hyun-Sik Chang, Russell Eaton, Benoît Giraud, Edward Daly, Joo-Shik Bak and René Raffray.
Ascending the Mount Ventoux is a ritual of passage: no one can pretend to be a real cyclist who hasn't suffered through the torments of the climb, preferably in July when temperatures can reach 35 °C.


The first cycling champion to challenge the mountain was a Frenchman named Jacques Gabriel: in July 1908, by way of the Bédoin route, it took him 2 hours and 29 minutes to reach the summit. The present record (55 minutes and 51 seconds ... with a much lighter bicycle) was established in 2004 by Spanish cyclist Iban Mayo Diez.


On Sunday 2 June, after a couple of months of training, six ITER staff members (Hyun-Sik Chang, Russell Eaton, Benoît Giraud, Edward Daly, Joo-Shik Bak and René Raffray) decided they were ready for the trial. Starting from the village of Sault, which makes for a longer 26-kilometre climb but one that is relatively easier, they reached the summit in 2 hours and 45 minutes.


One century ago, they would have been hailed as champions; in 2013, they can be considered impressive climbers ...