A traditional Indian blessing for the Cryostat Workshop 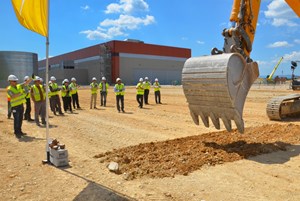 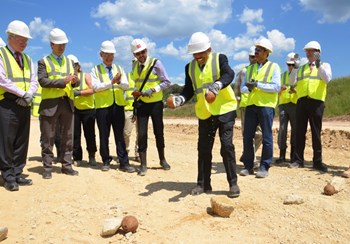 Coconut water falls on ''a piece of India'' during a blessing ceremony held on 6 June on the site of the future Cryostat Workshop.
The same Indian company (Larsen & Toubro Ltd) that will manufacture the cryostat will also build the Workshop and manage the assembly and welding activities all the way through to the final integration of the cryostat into the machine.
"We have already launched the procurement process for the raw material," explained Philippe Tollini, Larsen & Toubro's director for Europe and Russia. "We are presently in the manufacturing design stage, which will be completed by September. We should begin to receive the first cryostat segments from India at the end of 2014, beginning of 2015."
"The cryostat is an essential part of the ITER installation," explained ITER Deputy Director-General Rem Haange. "It has to be absolutely leak tight and its assembly requires kilometres of welding. It is a tough job not only to manufacture but also to assemble."
Last fall, Larsen & Toubro awarded the construction of the 5,500 square-metre Cryostat Workshop to the French company Spie-Batignolles, which was part of the consortium that built the adjacent Poloidal Field Coils Winding Facility.
Construction should begin in earnest in the coming weeks and take a year and half.