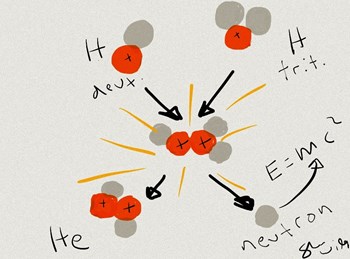 ITER and NIF are moving the fusion community into a new era that is increasingly focused on the final steps to harnessing fusion energy. The 25th SOFE helped to advance the international discussion concerning next-step programs and facilities on the roadmap to realizing fusion. © Earth Citizen
Fusion researchers from around the world met in San Francisco from 10-14 June for the 25th IEEE Symposium on Fusion Engineering (SOFE). This year's SOFE showed a marked increase in participation from recent years, with over 300 papers presented. Anchoring the technical program were numerous plenary and invited papers on topics at the forefront of fusion research and development. In addition, the recent completion of the National Ignition Facility and the start of ITER construction have put fusion engineering in the spotlight. Not least, the San Francisco setting and superb local arrangements by Lawrence Livermore National Laboratory (LLNL) added to the event that drew many of the world's leading fusion scientists and engineers together to discuss the progress and challenges in fusion engineering.


The ITER Project was well-represented at SOFE. Presenting the project's status were three of the 10 plenary papers; nine of the 45 invited papers; and dozens of contributed talks and posters from the ITER Organization and Domestic Agencies. The many ITER papers, on topics such as blankets, heating and current drive, magnets, first wall, divertors, and assembly, covered progress in nearly all of SOFE's technical areas.


Rem Haange, head of the ITER Project Department, opened the meeting with a talk on "ITER Engineering Integration Challenges" that highlighted both advances in fusion technology driven by ITER requirements as well as the technical and organizational challenges of the ITER enterprise. In explaining ITER's challenges, Haange, recipient of the 2011 Institute of Electrical and Electronics Engineers Fusion Technology Award, described ITER as "a highly integrated machine with very strong interfaces between the different components."


On the inertial fusion side, the symposium featured a tour of the magnificently engineered National Ignition Facility (NIF) at LLNL. Michael Dunne, director of laser fusion energy systems at LLNL, described the technical successes achieved by NIF since it went into operation several years ago. Dunne also gave a candid presentation of the gaps between the predicted and achieved target physics performance of NIF, and discussed science-based strategies aimed at closing the gaps.


ITER and NIF are moving the fusion community into a new era that is increasingly focused on the final steps to harnessing fusion energy. The 25th SOFE helped to advance the international discussion concerning next-step programs and facilities on the roadmap to realizing fusion.


Attendees received presentations on accomplishments in support of fusion next-steps from many of the world's currently operating tokamaks and stellarators. Also discussed were the construction status of the Wendelstein 7X project in Germany and JT60 SA in Japan—devices that will come into operation later this decade. Several speakers described plans for new facilities such as WEST in France and IFMIF to attack critical fusion development problems in plasma exhaust handling and materials. Fusion program leaders from Europe, South Korea, and China described strategies, including next-step facilities and critical R&D missions, aimed at moving toward fusion-generated electricity by about mid-century.


Among fusion conferences, the biennial SOFE event is unique in its strong focus on engineering issues. The first symposium, held in 1965 in Livermore, California, was called the Symposium on Engineering Problems of Controlled Thermonuclear Research. Today the scope of the series has expanded to include such topics as project management, system integration, and fusion roadmap planning, while maintaining a primary focus on fusion's challenging engineering problems and their solutions.


As fusion research has broadened internationally over the years, so has SOFE, with over two-thirds of the papers coming from outside the host country. The SOFE-2013 meeting occurred at a moment in fusion's history marked by both enormous opportunity and tremendous challenges. Participants at the Symposium agreed that fusion researchers must not let fusion's challenges cause them to lose sight of the opportunities.