A huge caterpillar of men and machinery

Share Tweet
A huge caterpillar of men and machinery
This 352-wheel vehicle, pulled/pushed along by two 490 hp tractors, will travel the 104 kilometres of the ITER Itinerary at night from 16-20 September—part of a test campaign to prepare for the first ITER loads in June 2014.
It's a short ride for an automobile, but it's a long, slow haul for a 352-wheel vehicle carrying an 800-tonne load.


It is also a very complex and delicate journey. Organizing the test convoy that will travel the 104 kilometres of the ITER Itinerary during the nights of 16-20 September has required a tremendous amount of planning and coordination.


The Itinerary is a EUR 112 million contribution from France to the ITER Project.


In order to bring about the test convoy, an "enormous technical, administrative and regulatory machine" had to be fine-tuned, according to Pierre-Marie Delplanque, a former French navy Admiral , who is in charge of overseeing operations along the ITER Itinerary for Agence Iter France.


This four-night campaign of tests and measurements aims at verifying that the loads—and the stresses they cause to the roads, bridges and roundabouts of the ITER Itinerary—agree with engineering calculations. Such a test operation merges the rigor of methodical scientific survey with the challenges of the Highly Exceptional Load (HEL) convoys that will deliver the largest and heaviest ITER components to the site.


As the test convoy progresses from the shores of the Étang de Berre towards the ITER site in Saint Paul-lez-Durance, hundreds of measurements will be taken: manoeuvring space and operational margins will be assessed, stress on the bridges will be appraised and triple-checked, and behaviour of the transport trailer will be closely monitored. 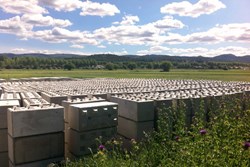 360 concrete blocks will be loaded onto the trailer, simulating the heaviest ITER load (approximately 800 tonnes).
The test convoy has been sized to mimic the most taxing parameters of the most exceptional ITER convoys: heaviest (it will be made of 360 concrete blocks, for a total of 800 tonnes), longest (33 metres), largest (9 metres) and highest (10.4 metres). (Of course, during the delivery of ITER components no single load will cumulate these dimensions.)


Although a "dress rehearsal" will be organized in the coming months, the convoy will also provide an opportunity to test part of the logistics that will be involved in the actual HEL convoys.


The September convoy, like the 230 convoys that will be spaced over five years for ITER, will travel in a "bubble" containing some 20 vehicles and stretching more than 100 metres along the road.


The 46-metre-long trailer carrying the dummy load will be preceded by French gendarmerie motorcycles, a pedestrian gendarmerie escort leader, guiding motorcycles, a pilot car transporting the Head of Convoy and an emergency tractor to pull the trailer in case of engine breakdown. The transport trailer will be followed by a rear-escort as well as an assistance van and further gendarmerie motorcycles. Additional personnel and vehicles will be mobilized to remove the traffic signs before and after the passage of the convoy.


When actual operations begin, in June 2014, the elite Garde Républicaine motorcyclist, flown down from Paris, will seal the "bubble" that encapsulates and protects the convoy—exactly as it does every summer when the Tour de France travels some 3,500 kilometres throughout the French provinces...

In Marignane, close to the Marseille-Provence airport, DAHER will operate a control room that will track the movements of every component shipped by the ITER Domestic Agencies to the ITER site.
The passage of such a huge caterpillar of men and machinery, hauling a load whose weight is equivalent to two Boeing 747s filled to capacity, will certainly attract large crowds of onlookers. Two dedicated areas have been organized along the Itinerary to accommodate the public.


For the local residents, it will be the first, spectacular, contact with ITER. But as roads are closed, albeit temporarily and only at night, this first convoy may also be perceived by some as a nuisance.


Some 86,000 people live in the small towns and villages located along the ITER Itinerary. And because approximately 200 kilometres of detours will have to be organized to divert regular road traffic (not mentioning the temporary closing of the thruway on two locations), several thousands more will be impacted.


This is the challenge within the challenge: the operation will also be a test of how the local population reacts to the convoys that will become a regular (almost weekly!) fixture for the five years to come.