Melting tungsten for a good cause


Our current Baseline begins plasma operations with divertor targets armoured with carbon fibre composite (CFC) material in the regions that will be subject to the highest heat flux densities. After the initial years of ITER exploitation, in which only hydrogen or helium will be used as plasma fuel producing no nuclear activation, this divertor is to be replaced. The replacement—a variant of the first component but fully armoured with tungsten—would be the heat and particle flux exhaust workhorse once the nuclear phase, using deuterium and then deuterium/tritium fuel, begins.


In 2011 the ITER Organization proposed to eliminate the first divertor and instead go for the full-tungsten ("full-W") version right from the start. This makes more operational sense and has the potential for substantial cost savings. By June 2013, the design was at a sufficiently advanced stage and we were confident that the necessary tungsten high heat flux handling technology was mature enough to invite external experts to examine our progress during the full-W divertor Final Design Review.


But making a choice to begin operations with tungsten in the most severely loaded regions of the divertor is not just a question of having a design ready to build. 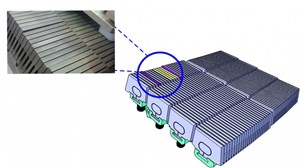 A small region of one of the full-tungsten modules in the JET divertor was carefully modified during the 2012 maintenance period to create a situation which every divertor designer would do anything to avoid—a deliberately misaligned edge. The long-awaited melting experiments took place from 5-15 August, with ITER Organization participation. Images courtesy of EFDA-JET (left) and FZJuelich (right).
Tungsten, a refractory metal with high melting temperature (3400 degrees Celsius), is a much more difficult material than carbon when it comes to handling very high heat loads and running the plasmas which ITER will require to reach good fusion performance. Why? For two principal reasons: as a metal, tungsten will melt if the heat flux placed on it is high enough; also, as an element with high atomic number it can only be tolerated in minute concentrations in the burning plasma core.


Carbon, on the other hand, does not melt but sublimes (passing directly from solid to vapour) and is low atomic number, so can be tolerated in much higher quantities in the core plasma. Unfortunately, carbon is a difficult option for ITER nuclear phase operations as a result of its great capacity for swallowing up precious tritium fuel and efficiently trapping it inside the vacuum vessel. Tungsten retains fusion fuel only at comparatively low levels.


Why is melting such a problem? Because a melted metal surface is no longer the flat, pristine surface which is installed when the component is new. One of the ways the ITER divertor is able to handle the enormous power flux densities which will be carried along the magnetic field lines connecting to the target surfaces is to make the target intersect the field lines at very glancing angles, so that the power is spread over a wider surface. But a small angle means that any non-flat feature on the surface will receive a higher-than-average heat flux and can be further melted, producing a cascade effect.

The ITER full-W divertor design goes to great lengths to make sure that there is no possibility—on any of the many thousands of high heat flux handling elements—of an edge sticking up (for example, as a result of mechanical misalignment) that could overheat and begin to melt under the relentless bombardment these components receive during high power operation. However ITER's size means that it will have the capacity to reach a value of stored energy in the plasma more than a factor of 10 higher than the largest currently operating tokamak, JET (EU). When some of this energy is released in a rapid burst (for example due to very transient magnetohydrodynamic events such as ELMs), some melting is possible—even if all edges have been hidden by clever design.

Of the JET divertor's 9,000 small tungsten plates, only a few were modified to present an edge of about 1.5 mm to the plasma in one of the hottest zones. The approximate size of the area is represented by the oval in the image.
We intend to stop this happening as much as possible by applying ELM control techniques, but occasional larger events cannot always be excluded. So one of the big physics questions we have tried to answer over the past two years is: what exactly happens when a burst of energy, sufficient to melt tungsten, strikes our divertor targets?


Until recently we had only rather complex computer simulations with which to establish the physics design specifications. One of the main worries was not just that energy bursts could roughen up and damage divertor component surfaces, but that the very rapid melting induced by the burst could lead to the expulsion, or spraying, of micro-droplets of tungsten back into the plasma leading to intolerable contamination and a decrease in performance.


The computer simulations say this shouldn't happen, but the process of melt ejection is so complex that experiment is the only sure test. But how to test the behaviour under conditions which only ITER can create? Well, as far as tokamaks are concerned, the only place where this was even conceivable was at JET, in which natural ELM energy bursts can be generated at levels similar to those expected for controlled ELMs in ITER. The problem is that these comparatively benign transients will not melt a tungsten surface!


In an experiment proposed and planned jointly between JET and the ITER Organization over the past two years, a small region of one of the full-W modules in the JET divertor was carefully modified to create a situation which every divertor designer would do anything to avoid—a deliberately misaligned edge.


The JET divertor modules are made up of about 9,000 small tungsten plates ("W lamellas"), bound together by a complex spring loading system. The lamellas are only 5 mm wide and about 60 mm long with 1 mm gaps between neighbouring elements. For the experiment, a few lamellas were machined to make a single element stand up out of the crowd, presenting an edge of about 1.5 mm on average to the plasma in one of the hottest zones of the divertor.
The result: reassuringly unsurprising! Although there was some evidence suggesting the occasional ejection of very small droplets from the melted area, there was very little impact on the confined plasma. As the ELM plasma bursts repetitively melted the edge of the misaligned lamella, the molten material continuously migrated away from the heat deposition zone, accumulating harmlessly into a small mass of re-solidified tungsten. The JET plasmas with 3 MA of plasma current were able to produce ELM plasma pulses very similar to the lowest amplitude events we need to guarantee for 15 MA operation in ITER—a fact which makes the experiments very relevant from a plasma physics point of view.


Much more analysis is required to see how the results can be matched quantitatively by simulation, but the observations are clearly in qualitative agreement with theory. That's the most reassuring part: that physics codes used to assist in component design for ITER tomorrow can be validated on experiments performed today. We will have to wait another year now for the damaged lamella to be retrieved from JET before the full picture of these important experiments can be completed, but this is already extremely valuable physics input for the important decisions coming up later this year with regard to our divertor strategy.