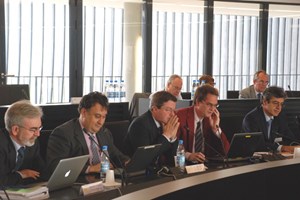 Debating the tungsten issue (from left): Head of the Plasma Operations Directorate, David Campbell; STAC Secretary Alberto Loarte; Head of the Internal Components Division, Mario Merola; Head of the Divertor and Plasma-Wall Interactions Section, Richard Pitts; and STAC Chairman Joaquín Sánchez.
During its 15th meeting, the ITER Council Science and Technology Advisory Committee (STAC) paved the way last week for two important technical decisions that will have positive impact on the performance of the ITER machine and on its scientific schedule.


Pending the adoption of the STAC proposal by the ITER Council next month, the ITER divertor will be equipped with tungsten (W) targets right from the start of operations, and two in-vessel coil systems (the ELM control and the vertical stability coils), will be in the ITER Baseline.


"This STAC meeting was a very significant one," David Campbell, director of the Plasma Operations Directorate, told the staff assembled in the ITER amphitheatre on Thursday, only one hour after the meeting had concluded. "Two important technical decisions were made. These positive recommendations came after many years of hard work at the ITER Organization and in the Domestic Agencies, supported by a wide range of scientists and engineers in the Members' communities. I think that we should feel very pleased that we were able to bring these technologies to a level of maturity to convince the STAC." 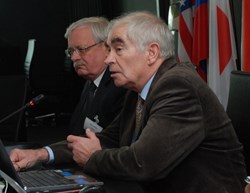 Two important technical decisions were made at this 15th meeting of STAC. The photo shows the Russian delegates Valery Belyako (left) and Nikolay Ivanov.
The decision to go ahead with the full tungsten divertor is based on the successful testing of tungsten prototype modules at the high heatflux ITER Divertor Test Facility in St. Petersburg, Russia, and on the encouraging experimental results of a controlled shallow melting of the W divertor recently experienced on JET.


"Based upon the detailed assessments reported in the two preceding meetings, the STAC believes that the technology and physics bases of the carbon and tungsten divertor options have reached the level where it is possible to decide on the Baseline strategy of the first ITER divertor," reads the STAC-15 report. The STAC thus recommends the use of W targets for the first ITER divertor and, "in order to make this strategy robust enough," further recommends that "the ITER Organization continues, together with the fusion community, the R&D in the technology and physics related to the W divertor (...)."
On the subject of in-vessel coils, the STAC was pleased with the "considerable progress" made on the design and prototype development. The conductors for both ELM and vertical stability (VS) coils have been manufactured and the bending, forming and winding trials are being performed successfully at the Institute of Plasma Physics at the Chinese Academy of Sciences (ASIPP).


Anna Encheva, the responsible engineer for ITER's in-vessel coils, reported that the completion of the prototypes is expected by the end of this year, with the testing assessment scheduled for March 2014. Some technical challenges remain to be solved, such as the brazing of the joints to the coils and to the feeders and brazing of multiple supports to the conductor.


STAC-15 also looked into the progress being made in the nuclear load analysis of the toroidal field coils and in the various heating systems, especially the good feedback provided by the ELISE facility and its valuable input into the design of SPIDER, the test bed for ITER's neutral beam ion sources.


The STAC recommended that the ITER Organization, in close collaboration with the Domestic Agencies, make an all-out effort to stem the slippages in the schedule and develop credible recovery plans.


At the end of the all-staff meeting, David Campbell took the opportunity to thank the outgoing STAC Chairman, Joachim Sanchez, "for all his hard work in leading the advisory board through a lot of thorny issues in the last two years, and for his talent for bringing the group of experts to agreement." His successor will be announced by the Thirteenth ITER Council convening 20-21 November.