A tribute to Beatrice and Arturo Tanga 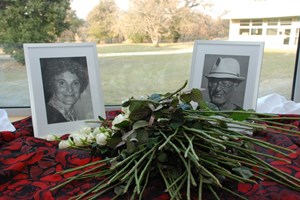 White roses were placed in front of the Tanga's photos.
This Friday, the ITER Organization and the fusion community commemorated two of their long-time team members: Arturo and Beatrice Tanga. The couple was killed in a car accident last December (see Newsline # 113). In order to honour their contribution to fusion research, and also to honour them as valued colleagues and dear friends, more than one hundred people congregated at Cadarache for a tribute. Many more listeners joined the ceremony via a live video link.


"He is greatly missed," ITER Director-General Kaname Ikeda said in his opening remarks, after which he handed the microphone over to Ruggero Giannella, a fusion scientist and lifetime friend of Arturo and Beatrice. In a very emotional speech—both for the family and himself—he surveyed the couple's early life and work at the University of Rome and later in Frascati. "Arturo," Giannella said, "was an experimentalist by heart." Working with Arturo was "like climbing a mountain," he continued. "It required some exercise and it could lead to exhaustion. But it was always worth it."


The afternoon's second speaker was Jean Jacquinot, Department Head at JET during the time when Arturo was in charge of the machine's operations. In addition to having a brave and creative mind, Jacquinot said, some would be surprised to learn that Arturo had managerial skills "which were not to be stopped by bureaucracy." He remembered the year of 1986, four years after the H-mode had been discovered on the ASDEX machine in Garching, Germany. Inspired by the German experiment, Arturo proposed to try something similar on JET—which would mean some serious modification to the machine. But as Arturo was "an experimentalist by heart," as Ruggero Giannella had stated before, he did not give up. The last skeptics were proven wrong when the achievements resulting from this courageous move were acknowledged as the highlight of the 1986 IAEA conference in Kyoto, Jacquinot said.


Later, Arturo broke the JET record taking the tokamak to 7 MA limiter operations, although JET was only designed to take 3.5 MA. "But," Jacquinot added, "to be fair, I have to mention that with 6.3 MA, Arturo also holds the record for the biggest disruption ever provoked on JET lifting the machine off the ground and leaving its rails dislodged." An incident that was later commented by then Director Paul-Henry Rebut as "weakness that needed to be identified and rectified."


Despite all the tears and sorrow that filled the auditorium in Cadarache Friday afternoon, this remark made the audience smile.


Dhiraj Bora, Head of ITER's CODAC, Heating & Current Drive Department was the next speaker emphasizing Arturo's contribution to ITER's neutral beam system. "We will not let you down," Bora promised, saying that the work would continue.


Last but not least, John Edward Allen from Oxford University honoured the work of Beatrice Tanga, a dedicated plasma scientist herself. Whereas her husband's focus was in heating high-temperature plasmas, Beatrice's interest was on low-temperature plasmas—rather at the other end of the mercury scale.